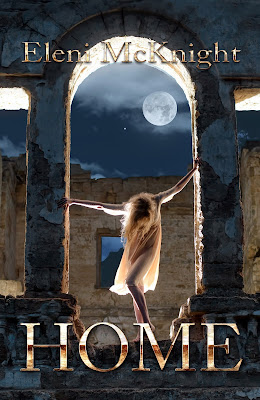 Knowledge is a Dangerous Commodity
HOME - the last bastion of civilization in a corrupt and fallen world. Outside dwell the reanimated dead, cannibals, and scavengers; remnants of a once great race. Inside, the commune is ruled with an iron fist by Deacon, and administered without mercy by the Elders.
Everyone knows their place in HOME. Everyone is safe in HOME…as long as you follow the rules.
Handmaiden Suzannah Commons is content with training to be a wife and mother, the only occupation open to women in HOME. But her world is turned upside-down when she tastes the forbidden knowledge contained in outlawed books.
Suzannah discovers a new way of life is possible, but that knowledge comes at a high price. It could cost her life. Or the life of the boy she loves.


Suzannah Commons: born in the winter fifteen years ago, she was the first daughter in her family. She grew up not allowed to question Deacon and his Elders, always believing them to be correct. It's only when she is forced to interact with Silas Maars and his family on a private level as their personal maid that she learns their strange secret of reading books and having new ideas that are subversive to Deacon's teachings... Just enough learning to make her dangerous.


Silas Maars: the oldest son of Ephraim and Marissa Maars, he was born sixteen winters ago and he went to the militia at age thirteen. He grew up ostracized and an outcast because he treated the women around him as his equals. It put a lot of the girls in Home off, and the boys had reason to torture him as well. He's a usual target for bullying within the commune. Silas has been admiring Suzannah from afar for years when she runs into him his quarters, the inciting incident that kicks off the book.


Ephraim Maars: At the tender age of fifteen, he was brought in from the militia training of Home to become the Commune's next doctor, being trained by Dr. Commons, Marissa's father. Dr. Commons gave him books to read to teach him about medicine, and eventually he took him to the library. Ephraim was completely enthralled by the novels in the library when Dr. Commons' daughter introduced him to the idea of fiction. He would stay up all night reading the books she suggested by lantern light. Eventually, Dr. Commons took Ephraim and Marissa outside the commune to gather wild poppies for the opium that Deacon needed for his pain and the tumors they assumed were inside him, and he and Marissa began to have feelings towards each other. Eventually, Deacon gave them permission to marry when Ephraim petitioned the Elder's council. When Dr. Commons died, Ephraim and Marissa took over the infirmary with heavy hearts. Ephraim reads to his family, and refuses food when it seems that there won't be enough leftover for his wife and daughters, because he cannot stand to see his family hungry. He quickly takes Suzannah in as one of his own when his wife begins to see Suzannah as her own daughter and Silas has a crush on her. He'd do anything to see his children safe and happy, but knowledge sometimes comes at a terrible price for them.


Marissa Maars: Marissa was always an outsider even in Home's commune, mostly because she had a “wild imagination” as a child, which was secretly due to all the books she read at her father's bequest in secret. She also had a fascination with childbirth, and her father trained her in labor delivery by the time she was sixteen, and she began reading books on midwifery, when she was allowed to marry the boy who was apprenticing under her father, Ephraim. They had Silas, their first son, within a year, and within a year, she was pregnant again, but her father died, breaking her heart in her second trimester. Her daughter Lana was born prematurely and Marissa's milk never came in. The child died within four days, and it's haunted her ever since. She had two other children, Noah and Telly. Silas admitted to his mother in private how he felt about Suzannah a long time before the inciting incident, and she quickly feels an affection for the girl, who would have been about Lana's age, and takes her on like a daughter, when she can tell Suzannah, like most girls in the commune, needs a mother. She is fiercely protective of her children and the labor slave girls at the edge of the commune, while she runs the surgery and infirmary. Healing the human body is a passion of hers, and Ephraim respects this about her, and trusts her.


Noah Maars: The second son of the Maars family, born ten summers ago. He loves art and to draw, and when his family goes to the Ruins, he spends the night drawing in a sketch pad in the headlights of the hovercar, since it's forbidden in Home, locked away in a safe place in one of the buildings where it will stay dry and clean. He's a sweet child, and understands more than he lets on.


Tellulah Maars: Telly is the youngest of the Maars family, six summers old. She loves drawing with colors when they are available, and doesn't quite know when to keep quiet. Unlike many little girls in Home, she is confident and loud without meaning to be. She loves making up her own songs and hugging people, even though it's discouraged.


Deacon: The Highest Minister in Home, he tells the people stories from the Holy Book and the ones that he gets from talking to the Great Master in his office, alone without witnesses. He is very paranoid, and keeps order and control by insisting that women are inferior to men, which gives the men something to be proud of, and by sending women who challenge him to the Labor Fields with their hair cut, an unforgivable sin in Home, and wearing pants instead of skirts, giving the signal that they are not even “women,” which gives the women of Home a reason to be afraid.


Elder Morris: he begins the story as a sub-Elder, an Elder in Training, wishing to be a part of Deacon's exclusive inner circle. Elder Morris, believing he is above women and can use them like objects, sets his sights on Suzannah as his next wife. He is quite aggravated by the competition he has for her hand in marriage from Silas Maars, a boy whose knowledge is dangerous.


Oakley: Suzannah's dim-witted friend who tries to be sweet and positive, but does idiotic things to be loyal to Deacon, and can't think far enough ahead to realize how it hurts her in the long run.


Simber: Suzannah's other best friend, a scheming and conniving girl. As Suzannah grows in the story, she begins to see how cruel and selfish and, in effect, dangerous, Simber actually is.

Eleni McKnight is a Murfreesboro, Tennessee native. She graduated from the University of Tennessee in Knoxville with a degree in Theatre with an emphasis in Literature and a wild passion for creating clothes and doing make-up. She's also an avid reader and loves music and theatre. She started writing at age eight when she had read all the Baby-Sitter's Club books that were out and wanted something new to read. It's never quite left her over the years
These days, you can usually find Eleni working backstage or costuming in local community theatres, reading a book, walking (that FitBit is addictive!), at a concert, drinking a craft beer with friends, knitting, embroidering, or taking a dance class.