Welcome to the Debut Author Bash!! Today I am featuring Alexandra Ott and her book Rues for Thieves. I was lucky enough to interview Alexandra so I hope you all show her some love in the comments!! 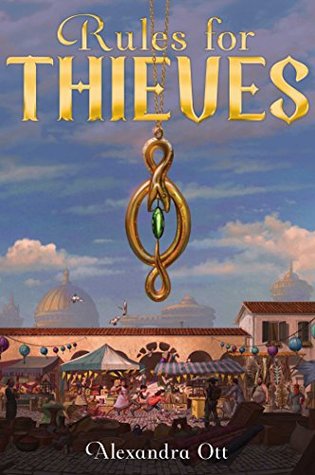 After twelve-year-old orphan Alli Rosco is cursed with a deadly spell, she must join the legendary Thieves Guild in order to try and save herself in this high-stakes debut.
Twelve-year-old Alli Rosco is smart, resourceful, and totally incapable of keeping her mouth shut. Some of these traits have served her well during her nine years in Azeland’s orphanage, and others have proved more troublesome…but now that she’s escaped to try her luck on the streets, she has bigger problems than extra chores to contend with. Surviving would be hard enough, but after a run-in with one of the city’s Protectors, she’s marked by a curse that’s slowly working its way to her heart. There is a cure, but the cost is astronomical—and seems well out of her reach.
Enter Beck, a boy with a gift for theft and a touch of magic, who seems almost too good to be true. He tells Alli that the legendary Thieves Guild, long thought to be a myth, is real. Even better, Beck is a member and thinks she could be, too. All she has to do is pass the trial that the King of Thieves will assign to her. Join the Guild, collect her yearly reward and buy a cure. Plus, Alli hopes the Guild will be the home—the family—that Alli has always wanted. But when their trial goes wrong, innocent lives are put in danger, and Alli has to decide how much she can sacrifice in order to survive.

Where do your ideas come from?
I find sparks of inspiration everywhere. With Rules for Thieves, I was inspired by all of the heist novels that I loved when I was a young reader, and I wanted to put my own spin on that kind of story. I also got some ideas from an imaginative game I invented for my little sister when we were younger!

How do you develop your writing ideas?
Every writing idea is different—sometimes I start with plot, other times I start with character or setting. Once I have the basics of an idea, I brainstorm a loose outline so that I have a little bit of structure to work with, but I leave plenty of gaps that I can explore as I write.

Where do you find inspiration for your characters?
Characters are the most mysterious part of the writing process for me; I’m not really sure where they come from. Alli, the protagonist of Rules for Thieves, sprang into my head one day almost fully-formed, and I knew immediately that I needed to write her story.

When did you first realize you wanted to be a writer?
I loved books from a very young age, and I’ve been telling stories for just as long. As soon as I was old enough to realize that being an author was an actual job, I knew that was what I wanted to do.

What makes you unique as a writer?
I think every writer is unique—we all bring our own experiences and perspective to a story. If a dozen writers all started with the same idea, they’d end up with a dozen very different novels!

Describe your book in 140 characters or less.
Orphaned girl tries to join a legendary band of thieves to get the cure for the curse that’s killing her.

Tell us about the main character(s).
Alli Rosco is a twelve-year-old orphan with a sarcastic sense of humor. She’s smart, headstrong, and more than a little reckless, with a talent for getting into trouble! She is a girl who misbehaves, who isn’t well-adjusted, who can’t get adopted because she’s seen—and sees herself—as a “bad” kid. That was what drew me to her story: what happens to an orphaned girl that no one believes in?

What writers inspire/d you?
So many! J.K. Rowling, Megan Whalen Turner, and Cornelia Funke were some of the biggest influences on Rules for Thieves in particular, but there are many more.

How has your writing career changed since you started?
My writing career is really just beginning. The biggest difference between when I’m working now and when I was writing a few years ago is that now I know people will actually read the book when I’m done!

What does your writing process look like?
My process is different for every book, but I usually start with a loose outline, then write a very fast first draft. I like to write first drafts quickly so that I can remain deeply immersed in the world; I find that I lose momentum if I have to take breaks. After the first draft, I go through several rounds of revision, which usually involves getting feedback from my editor and/or critique partners.

What would you say is your interesting writing quirk?
I’m very particular about what I listen to while writing. I can’t listen to music because I find it too distracting (even without lyrics). But I don’t like complete silence either. I often listen to the sounds of thunderstorms or other ambient noise, though I prefer different sounds for different projects. It has to strike the right mood!

What are your writing goals for the next year?
I’m currently working on a new middle grade fantasy idea that I’m planning to finish soon, and I’d also like to work on a YA project that I’ve had set aside for a while.

What is the most useful tool you use as a writer?
Aside from my laptop, I like using regular old index cards for outlining and plotting. Laying all of the cards out makes it easy to see the structure of the novel in one glance, which I find really useful.

What character would you most like to be stuck in an elevator with?
Hermione Granger, because a) I adore her and b) she’d know a spell to get us out of the elevator.

Do you hear from your readers much? What kinds of things do they say?
I’ve gotten a few lovely messages from readers. One of the most touching was from an eight-year-old girl who told me she wanted to be a writer like me when she grew up. It was so sweet I got a little teary!

What do you like to do when you're not writing?
Read, of course! (And see above re: Netflix.)

What’s the best vacation you ever had?
I studied abroad for a summer in Spain when I was in college, and it was an amazing experience. It wasn’t technically a vacation, since I was taking classes, but doing homework on the beach still felt like a vacation. ;)

What’s your favourite rainy day movie?
Pride and Prejudice. (Either the Ehle/Firth mini-series or the Knightley/MacFadyen version.)

If you could be any age again for a week, which would you choose and why?
That depends… do I get to pick the week? If so, I’d be twenty again just to relive a week of that Spain trip (see above).

If you could have personally witnessed one event in history, what would it be?
This is such a tough question—so many good options! I think it would be amazing to see one of Shakespeare’s plays performed for the first time. Imagine being in the audience at the Globe!

What's you favourite place to read?
I usually read in bed, though I also have a cozy reading chair.

When you walk into a book store, where do you head first?
I typically start in the children’s section and work my way up to the YA books, then the adult fantasy, then new releases . . . and then every other section in the store. ;)

If you had a million dollars, what would be the first thing you would buy?
Books, of course! 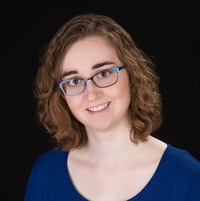 Alexandra Ott holds a B.A. in English from the University of Tulsa. She currently lives in Oklahoma with her tiny canine overlord. Rules for Thieves is her debut novel. Visit her online at www.alexandraott.com and on Twitter at @Alexandra_Ott.

GIVEAWAY:
signed book and swag pack for the giveaway, open for US only.