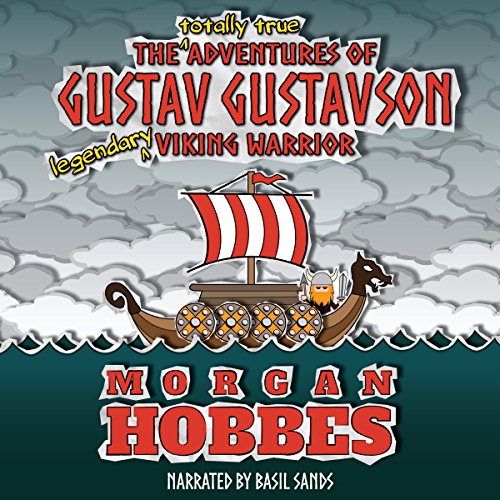 Experience the awesomeness of my unexpected voyage to an undiscovered land where I survive shipwrecks, arena death match spectacles, rampaging rhinoceraptors, naked and rather surly giants, and even dragons! Well, a dragon.... All in my pursuit of fame and glory.Every word of it is true. Totally true. How do I know? Because it's all about me. Gustav Gustavson, Legendary Viking Warrior.

I'm not going to summarise the story, because in all honesty, it's way better to go into this with no prior knowledge!!

This was such a fun and entertaining read!! Gustav was absolutely hilarious. He thinks of himself as the best at everything and he thinks everyone knows him or has at least heard of him and his greatness. Despite him being so cocky, he is still a very likable character because it isn't a brashy cockiness, it's more that he is so sure of his abilities and himself and doesn't care what anyone else thinks.

This was also packed with adventure and different creatures. Gustav even manages to find himself in the midst of naked giants, being put into a fight to the death and also facing a dragon, all of which is no problem for the majestic Gustav!!

In all, this was an easy book to listen to and one that had me smiling the whole way through. I really really hope we get more adventures from Gustav!

The story may have been great, but the performance by Basil Sands was phenomena! He nailed Gustav and his innocent attitude. His tones and accents were brilliant and made for effortless listening. He brought this book to life!! It sounded like he had fun with this book too because you could hear the humour in his voice.

I was given this audiobook at my request and have voluntarily left this review. This in no way affected nor influenced my thoughts.

If you've read this far then I have an awesome giveaway for you!!! 5 of you can win an Audible code for the book from the UK Audible.