Dispocalypse by Michael A. Rothman Blog Tour and Giveaway! 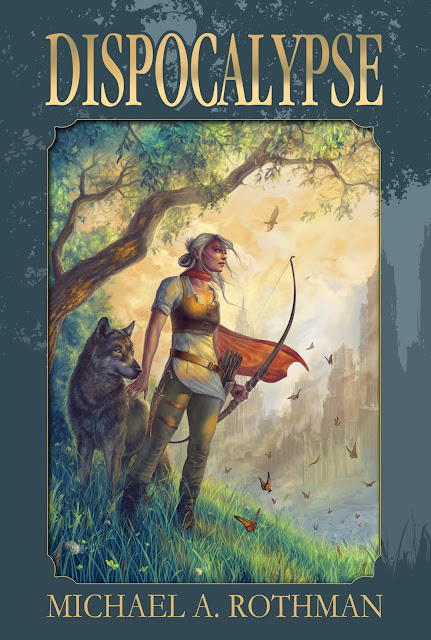 
In a post-apocalyptic world ruled by a Governor who is both feared and worshipped, Willow is a seventeen-year-old girl who is just trying to get through her last year of studies. But when her father dies, she experiences strange dreams that change everything about how she looks at the world and at herself.

Haunted by the tragedy, Willow begins pushing herself beyond anything she could have imagined she was capable of. It’s only when she catches the attention of some of the Governor’s minions that her world is turned upside-down.

As Melanie and Willow wandered through the market, Willow recognized the smell of manure and felt a pang of sadness. It reminded her of growing up on a farm. Already the memories felt more like remnants of a dream, and though she knew she should want that, it made her sad to lose her other life. A crowd of people at the trapper’ s stall drew Willow’s attention.

He pulled a tarp off a huge collection of cages and the crowd murmured with approval as Melanie and Willow approached to take a look. She couldn’t help but be reminded of a rabbit as she stared at one furry creature quivering in his cage. She even had a dim recollection of cuddling with baby rabbits when she was a kid in that dream of hers. These weren't rabbits–far from it. Sitting in individual cages, the ferocious-looking creatures had gray fur, large emotion-filled eyes and a snarling maw full of sharp teeth. Definitely not the kind of thing you’ d want to cuddle with. Willow leaned closer to Melanie and motioned toward the cages on the merchant’ s cart.

“The werebits are staring at me.” Many of them had turned their faces toward her and stared with their soulful dark eyes. She gulped.

“It looks like they want me to help them,” Willow murmured, struck for the first time by how intelligent they appeared.

“Just how sick were you?” Melanie laughed.

“Werebits are nasty pieces of work. They’ll take a finger off, if you give them half a chance.” She pointed to a nearby cart that had strips of meat drying in the sun.

“My mom buys them live and my dad butchers them himself. They make wonderful meat pies.

”Scanning the cages of trapped animals stacked under the canopy, Willow felt sorry for them. As she stared at one, it seemed as if he were looking back at her with an intelligence that completely unnerved her. She felt guilty for just standing there, leaving them to their fate. She should do something, but what?

“Come on,” Melanie pulled Willow by the arm.

”Willow grudgingly tore her attention from the sad plight of the werebits, feeling sick that she’ d actually eaten some of their meat that morning. She silently swore to herself that she’ d never eat a shred of that animal again.