Book Feature and Guest Post: Legion of the Undead by Michael Whitehead! 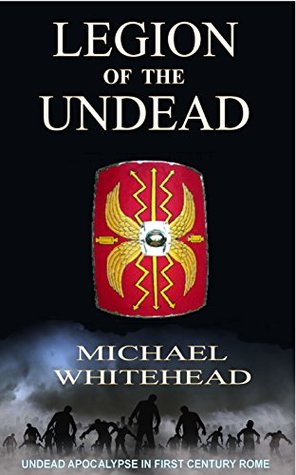 When Roman legions march over the borders of the Empire they meet an enemy greater than any they have ever faced. Emperor Vespasian has ordered a push further into Germania than the legions have ever been and an enemy army is gathering to meet them. What neither side is prepared for is the darker force that they will both face. Indiscriminate and incapable of mercy, the new enemy will drive the Romans to the very brink of destruction. The Gates of Hades have opened and the Roman Legions must face what has escaped.

Our Flexible Friend
By Michael Whitehead

If you’re old and lucky enough to have grown up in the U.K. in the eighties you are sure to remember the T.V. adverts for a credit cards called Access. The tag line for the advert was “Your flexible friend.” As a writer I would argue that this is the perfect tag line to describe our friend the zombie.
He is so flexible that even the name, zombie, is up for grabs. Walkers, biters, Z’s, Christopher Artinian’s RAMS and my own personal choice of The Risen are but a few of the dozens of names for our apocalypse bound buddies. If the name is so open to change, is it really any surprise that there is so much variety associated with zombies in general?
Fast or slow? It’s a common question, which I’ll come back to in a bit. It’s just the start of the possibilities available to the zombie writer. We can kill them in so many wonderful ways, shooting, hitting, crushing, melting, vaporising or burning, the options are endless. The added bonus is, if we decide that those things don’t kill them, then the fun just increases. What’s better than having a burning zombie running around setting fire to anything it comes into contact with? Fair enough, you can’t drown them, but doesn’t that just add to the ways we can mess with our main characters?
Zombies are a pretty obedient lot on the whole. Perfectly capable of being completely silent when required, they will moan on cue the moment it’s appropriate. If we ask nicely they will wait in a room for days and days but as soon as we say the word, they will escape from a locked prison cell. In fact, they can be relied on to flow out of anywhere they are being kept, like water out of a cracked jug, but only when we need them to.
It’s not even like they need companionship. They are equally happy to spend weeks by themselves or to wander the desert with a hundred thousand mates. You could almost call them the perfect roommate, keeping themselves locked in their room until it’s time to become the party animal.
So we come back to the age old question, fast or slow? How does a writer decide what abilities to imbue his new toys with? I mean, we might be writing about these guys for a long time. In my case it’s not the zombies but the guys they were fighting against that gave the zombies their major characteristics. It’s no good sending a bunch of slow, dumb as rocks, weak as kittens, zombies against a team of badass marines. At the same time, do we really want to waste a breed of all singing, all dancing, killing machines, against a house full of stoned students?
In my case, I was sending our undead friends against the Roman legions. Big blocks of shield holding, armour wearing, sword wielding killers. Slow zombies were lambs to the slaughter. Dog food amongst a pack of hounds. That said, fast zombies were not going to fair much better against cavalry and archers. I needed something to give these ancient world, killing machines a run for their money. Or in my case, a jump.
I figured that having my Risen leap into the air at the last moment would scare the crap out of a bunch of guys that spend their time hiding behind a wall of shields. More than that, the legionaries in the ranks behind are so tightly packed that the zombies landing further back would have a field day against men who couldn’t draw their swords to defend themselves. The flexibility of the zombie wins again.
Of course the Romans will only fall for this for a short while, before they come up with ways to counteract the attack. They’re clever bastards, these Romans. I wonder if I should tell them that they haven’t seen everything these Z’s can do? Nah, I’ll let them find that out for themselves.
The zombie is the gift that just keeps giving. We need to look after them for our own sake. They’re like a favourite pet, if we treat them nicely they will give us hours of fun, but mistreat them and they might just turn around and bite us. Give them a challenge to stop them getting bored, plenty of exercise, and of course a lot to eat, and they will remain loyal for years to come.
Long live the zombie..........In all it’s many forms.

Legion Of The Undead by Michael Whitehead is available now on Amazon.
Find Michael at:  Twitter @gyp11111 and Facebook: https://www.facebook.com/MichaelWhiteheadAuthor

For a chance to win an eCopy of the book from Amazon, comment below!!!!