Child of Mine by Jana Richards Book Blitz and Giveaway! 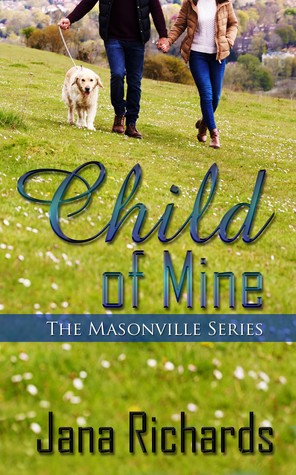 Lauren didn’t intend to sleep with her brother-in-law Cole on the day of her husband’s funeral. But now that she is pregnant, she’s not sorry. Cole’s given her a baby, a long-wished-for miracle. He’s been her friend forever, though she never told him or anyone else how unhappy her marriage to his cheating brother was. And she’s afraid to tell the small town that considered her husband a hero that the baby isn’t his.
Cole’s been in love with Lauren since he was sixteen. It kills him that everyone believes the baby is his dead brother’s. All he wants is to claim the baby, and Lauren, as his own. Though she marries him, will Lauren’s heart ever be his?
Lauren must tell the truth or risk losing Cole. Is her newly-discovered love for him greater than her fear of scandal in her hometown?

Five Things You Need to Know About the Masonville Series

“We asked you to come here this evening because we have something we want to tell all of you. Lauren and I are getting married.”
The room went deathly quiet. Lauren tightened her grip on his hand. Her face turned pale as she stared at her family’s stunned expressions. Cole put his arm around her waist, afraid she might faint.
He needn’t have worried. She lifted her chin at a defiant angle and turned to face the others.
“Cole and I have decided this child needs the best possible start in life and that means having a mother and a father. We’ve always been friends, so what better way to start a marriage then with friendship?”
Garrett pushed himself to his feet and came forward. “I think it’s a hell of an idea. You two will make wonderful parents.”
He enfolded Lauren in an embrace. Cole heard her murmur her thanks to her brother. “I think you’ll make a wonderful uncle.”
Charlotte was next in line. She kissed Lauren’s cheek. “I’m so happy for you, sweetie. When’s the big day?”
“In a couple of weeks,” Cole said. “As soon as we can arrange everything.”
Lauren’s parents, Robert and Grace, also extended their congratulations. If they had reservations, they kept them to themselves.
Only his mother remained in her seat, staring at them in disbelief. Cole sat next to her. “What do you want to say, Ma?”
“You can’t replace Billy.” She choked out the words.
“I know that.” He’d known he was second best in her eyes all his life. “I wouldn’t even try.”
“But to marry his wife, to raise his child? It’s wrong. They don’t belong to you. You always wanted what belonged to your brother.”
He wanted to shout at her that the baby was his, that it had nothing to do with Billy. And Lauren was his, too. He’d loved her first. His brother had never appreciated what a gem he’d had in her. He’d squandered his marriage the way he’d squandered the love that had been lavished on him all his life, from his parents, from Lauren, and even from him.
Instead he pressed his lips together and said nothing. He felt a hand on his shoulder, and saw that Lauren stood beside him.
“I know this is difficult for you, Ella. I know you’re grieving. But I have to raise my child in the best way I know how. Aside from my brother and sister, Cole is my best friend in the world. He’s a good man, and I know he’ll be a wonderful father. You should be very proud of him.”
His mother stared at Lauren as if she couldn’t believe what she was saying. Her face twisted. “Don’t you miss Billy at all? Don’t you grieve for him? Nobody understands. Nobody.”
“Ma.”
He said the word a little sharper then he’d intended, but at least it got her attention. She looked up at him in surprise.
“I’m sorry if it hurts you, but Lauren and I are getting married. We care about one another and we care about the baby. The three of us are going to be a family. I wish you could be happy for us.”
Ella dabbed at her eyes with a tissue. Finally, with a shuddering breath, she turned to look at him.
“For Billy’s baby’s sake, I’ll try.”
Billy’s baby.
The pain was swift and unexpected. If she’d stabbed him through the heart with a dagger it wouldn’t have hurt as much. 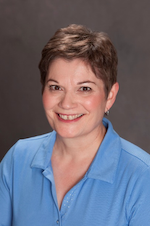 Author Bio:
When Jana Richards read her first romance novel, she immediately knew two things: she had to commit the stories running through her head to paper, and they had to end with a happily ever after. She also knew she’d found what she was meant to do. Since then she’s never met a romance genre she didn’t like. She writes contemporary romance, romantic suspense, and historical romance set in World War Two, in lengths ranging from short story to full length novel. Just for fun, she throws in generous helpings of humor, and the occasional dash of the paranormal. Her paranormal romantic suspense “Seeing Things” was a 2008 EPPIE finalist.
In her life away from writing, Jana is an accountant/admin assistant, a mother to two grown daughters, and a wife to her husband Warren. She enjoys golf, yoga, movies, concerts, travel and reading, not necessarily in that order. She and her husband live in Winnipeg, Canada with an elderly Pug/Terrier named cross Lou. She loves to hear from readers and can be reached through her website at www.janarichards.com