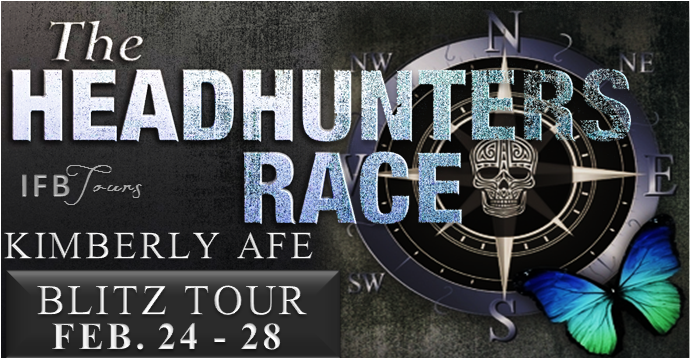 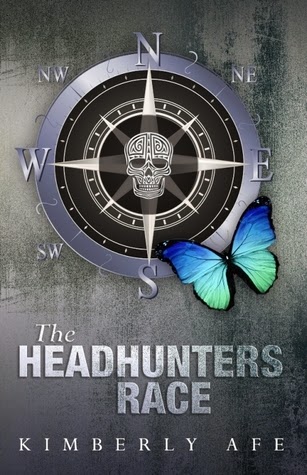 Sixteen-year-old Avene was sentenced to prison at thirteen for a crime she didn't commit. Now she has a chance to win her freedom back – if she enters the Headhunters Race. Second prize isn't so bad either, an upgrade to the Leisure Prison if you make it to the finish line. To win either prize, Avene and the other prisoners must navigate one hundred and fifty miles of dense forest, desert, and worst of all, cannibal territory.
With a mechanical collar timed to strangle the prisoners if they're not back in nine days, Avene allies herself with seventeen-year-old McCoy, another prisoner that insists on helping her at every turn and a boy she's trying hard not to fall for. Together they battle nature, other prisoners, and the timed death collars to win the coveted prize. But when Avene is tested with one deadly conflict after another, she realizes there is more at stake than winning her freedom – first she has to survive.

This excerpt is from the day the race starts and Avene is getting ready.

Hours later, when the birds start chirping, I know it's almost time to wake up. I get out of bed and change into my special clothes. The ones I've been saving for this day: a sturdy pair of jeans and a man's blue flannel shirt. Underneath I wear my white fitted tee-shirt, depicting a crudely drawn skull. I added the crossbones bearing a set of daggers with a nearly dried-up marker I found a year ago. It represents my mantra for the race: stay away from me or I'll kill you.

I tie my sheath around my thigh, re-lace my boots with longer and sturdier cord I found on a pair of men's boots in the goodie two shoes clothing pile, and then gulp down several handfuls of water. I wipe the droplets from my mouth while I pace like a caged panther. A few minutes later I slug down another five handfuls before I remember to fill my water bottle.

Zita leans up on her elbow. "You're sure you want to do this?"

She throws off her cover and leaps to her feet. "Well, we better do something with that hair. They'll start calling the prisoners out soon."

Zita snatches our slop container from the table. She fills it with dirt from the corner and mixes in a bit of water. "I'm not sure how well this will work," she says, stirring it with her finger. "Sit."

I sit on the ground cross-legged at her feet. She kneels beside me, takes a small lock of hair, and rubs mud all through the strands. The stringy tresses stick together, cold and wet against my cheek. After one side of my head is finished, she steps back and surveys her work. "Nope, this isn't working. Your roots are still too light."

"Why don't you wash her whole head in it?" says McCoy.

I stiffen. Leave it to him to think of dunking my whole head in mud.

"You're a genius!" says Zita. She grabs my arm and pulls me to my feet. "Help me," she says to McCoy and I cringe at the thought of him touching my head when I'm a direct competitor. He might send his ninja blade across my neck.

"You can drink ours," says McCoy.

Right. I'm not going to drink theirs. He'd love that. Especially now that he's going to have to hunt on his own and the only way he knows how is by poaching off me.

Zita stops short of pouring in handfuls of dirt. Instead she goes to the fire pit and scoops out gobs of ash. She swishes it around with her fingers, stares at it like she's not satisfied, and goes ahead and dumps in a handful of dirt anyway. "Okay, bend over, girl."

I lean over the sink while Zita pours the murky mixture over my hair and massages it in. It's gritty and gross.

"Hand me that old shirt in the corner," says Zita.

I'm looking upside down at McCoy while he retrieves the old shirt she uses as her dust rag. She wrings out my hair and then places the shirt over top and squeezes out the excess water. "I wish I had a comb," she says, flipping my head up and steering my behind back to the ground.

McCoy dashes into their room. "Boom has one, hold on."

I lean my head back in defeat. He's determined to help me, to make me feel obligated to help him in return, but his niceties aren't going to work on me.

Avene was sent to prison for something she didn't do. This isn't just a prison though, this is a hell. King runs the prison in such a way where he doesn't care if the prisoners live or die. He feeds them in a trough twice or three times a week and there's never enough to feed everyone. Its a constant battle to get food. Avene tries to supplement the meals by hunting in the abandoned part of the prison. To Avene this place is hell.

The only way to gain your freedom is to take part in The Headhunters Race. Its a race to kill and bring back Gavins head. He killed Avenes mother and is also her brother!! Avenes mom was married to Governor King and when she was killed King said she was an accomplice. Gavin got away but Avene was thrown into prison. If you win the race you are granted your freedom but even if you don't win, you can still win an upgrade to the Leisure prison. Avene had applied twice but King doesn't let her enter. This time is different.

When she gets her place in the race she has every reason to succeed. She wants revenge on Gavin and wants her freedom. She knows the race wont be easy but she has no idea whats in store. With the help of McCoy can she stay alive long enough to win her freedom?

Ok, that was quite a ride!! When I read the blurb I immediately added it to my wishlist. I got the chance to review it and I jumped at it.

From the get go you are thrown into the deep end. The prison is a horrible place and the author captured the essence of it perfectly. She made it come alive and you could picture how dank and dreary it was. The prisoners have to fight each other for food. They steal and will do anything to feed themselves. Any weakness is exploited and every second is one you have to watch your back. You trust no one!!

Avene went from living her life to being put into this place for no reason. She isnt the only one though. Anyone King thinks has crossed him is put into it. He is one mean and nasty so and so!! He has no compassion and doesn't care about anyone.

Avene is an awesome character. She is tough, strong and smart. She finds it hard to trust anyone so when McCoy keeps showing up wherever she is she immediately thinks the worse. All she wants is revenge on Gavin and King dead. She knows the race is tough but still signs up. She stays strong through the whole journey and always uses her head. The only thing I didn't like was her constant reference to Verla and what Verla said!!! It got annoying after a while.

Oh McCoy. Be still my heart!!! He totally won me over. At the start I thought he was a weird one, constantly watching Avene, but he is anything but. Strong, kind, smart and full of awesomesauce, I loved his character. He totally worms his way into Avenes life and without him she mightn't survive.


This book grabbed me from the very first page. It was action packed, full of suspense, filled with characters that will have you rooting for them and is firmly on my favourites list. Every page is a fight for survival and has you on the edge of your seat. I couldn't get through the pages fast enough but yet I dint want it to end. You think you know what will happen but you have no idea!! The twists and turns would give you whiplash! I loved everything about this and can not wait for book 2. It ends on a cliffhanger and when I got to it I was like NOOOO, it cant end like that.  I need the next book like yesterday!!! Highly recommend. 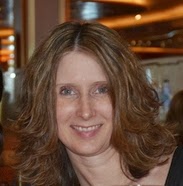 Kimberly is the mother of two awesome kids, wife of the nicest man in the world, and her dog's best friend. She works by day and writes middle grade and young adult science fiction and fantasy novels in her spare time. She lives with her family in the beautiful Sonoran Desert.
Social Sites
Website     Goodreads     Twitter     Facebook     Blog   Amazon