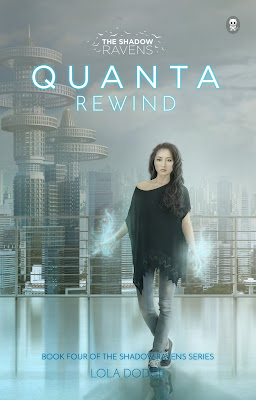 With more and more Red Helixes turning up missing or dead, the Shadow Ravens are ready to take their fight to Doctor Nagi himself.But breaking into Alpha Citadel is no cakewalk, and Quanta isn’t so sure about this whole “teamwork” thing.If she and the Ravens can’t learn to work together, no amount of rewinding time will save them from the inevitable.And if the Seligo win, everyone loses.


Previous Books in the Series: 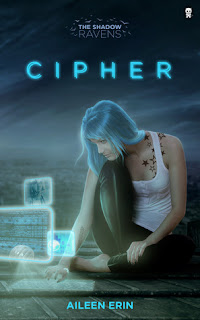 
Alone and on the run, Cipher doesn't talk about her secrets, her powers, or the people chasing her. She can’t let anyone get that close. At least, she shouldn’t.

Knight is working undercover for the bad guys. He’s done things that have marked his soul, but it’ll all be worth it if he can save the girl who means everything to him—the girl who saved his life by putting herself in danger. It’s been twelve years, but Knight knows she’s still alive, and he’s made it his mission to find her and keep her safe.

When Knight finally catches up to Cipher, electricity sparks. He’s crazy gorgeous, stupid brilliant, and begging to lift the burden from Cipher’s shoulders. Can she really trust him with her secrets? With her life?

She doesn’t have long to decide, because Knight isn’t the only who’s been looking for her. Now Cipher can’t run without leaving him behind. What good is being together if they’re both dead?

To save Knight, Cipher will finally stop running…one way or another. 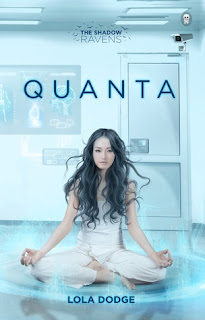 Just because Quanta can see the future doesn’t mean she can change it. She’s spent most of her life imprisoned, feeding her captors information to keep herself alive, but she’s finally reached the endgame and her death creeps closer by the moment.The son of two senators, Altair Orpheus leads a life of privilege that provides the perfect cover for his side job: working with the rebel Shadow Ravens to undermine the ruling Seligo government. Everything is running like clockwork until he crosses paths with Quanta. As he watches her deftly maneuver through life in a perverse prison, his plastic heart melts. A jailbreak would be suicide, but Tair is willing to sacrifice everything to give her a chance at happiness.Now Quanta senses a terrifying new future brewing. She and Tair are bound together, but every image of them kissing, snuggling, and acting knee-weakeningly happy is balanced by a much darker possibility. They’ll be picture perfect together, but only until time rips them apart. How can she follow her heart when she’s seen how their love plays out? 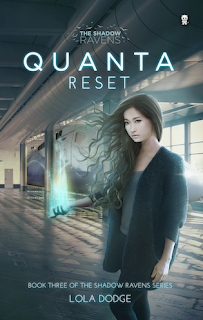 Quanta has escaped her laboratory prison, but that’s where the good news ends.

Life at the Shadow Ravens’ compound is a disaster. She’s drowning in visions of the dark pasts and darker futures of her fellow Ravens and is plagued by her own panic-inducing memories, but Lady Eva still expects her to “train” and “participate in missions.” Plus, the food tastes like burnt plastic.

The only bright spot is her genetic pairing to the brilliant Altair Orpheus. As their relationship grows, she’s positive that chemicals aren’t the only things drawing them together—although chemistry is definitely involved.

While they test the limits of her game-changing new ability to reset time, word arrives from Eva’s agents: Doctor Nagi is still experimenting with her DNA. If he succeeds in duplicating her power…

Forget the Shadow Ravens. The whole world is toast.

Excerpt:
GUYS! Dex’s voice boomed across the hangar. I groaned. He had to mess with us now? Get over here, Knight called. Now. Dex would jerk us around, but Knight? Nope. My brain clicked straight into action mode. Emergency? Let’s find out. Tair grabbed his glasses and tugged me to my wobbly feet. Together, we booked it to mission control. I could tell it was bad from halfway across the hangar, but everyone stood staring at the vid screen in horror instead of arming up. The hangar wasn’t under attack. So what was happening? Tair and I sprinted so fast we were on top of the group before the timeghosts could hint what I’d missed. What— As soon as I spoke, the future twisted. My vision cut to pure blue as time ghosts took over my head, flashing me a thousand death scenes at once. Tair. Cipher. Knight. Devan. Dex. And me. All falling, screaming, bleeding. I gripped my temples hard and tried to shake free of the images, but they kept hold, death after death after death. Whatever was set in motion, it wasn’t just the six of us who’d suffer. Oliver. Mona. Lady Eva. Kiri and Aliya. More Shadow Ravens. Everyone. Everyone was in danger. Quanta. Tair held me in his arms, and panic rang through his voice. Quanta. I gripped his T-shirt and rebuilt my mental walls. When the time ghosts disappeared, I finally blinked back to the present, where I needed to finish the question I’d started. I staggered out of Tair’s arms. What just happened?  Eva sent... Just watch. Knight only stepped away from Cipher long enough to cue up a video file. Then he wrapped her back into his arms, whispering reassurances I didn’t get to hear. The vid screen stole my breath away. Doctor Nagi stared dead at us. He wore his dark hair slicked back the same as ever, and his thin lips twisted in the cold, familiar smile that made me want to throw up everything I’d ever eaten. 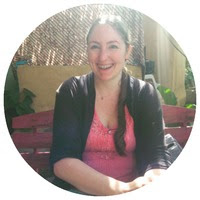 Lola is a compulsive traveler, baker, and procrastinator. She earned her BA in English from Stonehill College and MFA in Writing Popular Fiction from Seton Hill University—and hasn’t stopped moving since. When she’s not on the road, Lola spends her time indoors where the sunlight can’t melt her, writing or bingeing on anime and cherry soda. She can be summoned in a ritual involving curry, Hello Kitty idols, and a solid chocolate pentagram.