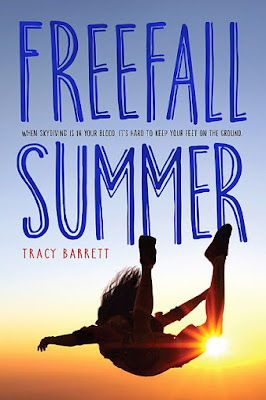 Sixteen-year-old Clancy Edwards has always been "the good girl." Ever since her mother died in a skydiving accident when Clancy was young, Clancy's father has watched her like a hawk. Between her dad's rules and her boyfriend's protectiveness, she's longing for an escape this summer. Then she meets Denny.
Denny is a new skydiving student and college freshman. Clancy lets Denny think they're the same age--and that she's old enough to make decisions for herself. But the lies snowball, relationships are damaged, and suddenly Clancy isn't the person she wants to be. If only making choices were as simple as taking a leap out of a plane. Before Clancy can make things right, one last act of rebellion threatens her chance to do so--maybe forever.

My mom’s best friend, Angie, is recording from the ground. She was on the demo team but wasn’t great at formation skydiving, so another teammate, named Michelle, took her place for formation, which didn’t leave Angie much to do while the competition team was practicing. On the video she talks to someone you can’t see, identifying who’s who by how they fly their canopies. “There’s Patsy . . . and Louisa . . . and Michelle.” She doesn’t sound worried at first as she says, “Now where’s Jenna?” She sweeps the camera around and stops at a black dot against the brilliant blue that I know is my mom, but her canopy isn’t open. Instead, there’s a lumpy, misshapen thing flapping behind her.

“That’s Jenna.” Uncertainty and tension creep into Angie’s voice. “She’s—I can’t tell—it looks like—it’s a bag lock.” And that’s what it is: the canopy is stuck partway out of its container. My mom flips over on her back. This should pull the canopy out, but it doesn’t. Then she flips again so she’s belly-down and stable, but the canopy hasn’t budged. Angie starts calling, “Oh God, Jenna, cut it away! Cut away, Jenna!” Another voice nearby yells the same thing, and even though my mom is obviously too far away to hear them, that’s exactly what she does, as though she’s following their instructions. She pulls the cutaway handle to release the risers from her rig, and for a second it looks like everything will be okay, but the main canopy doesn’t fly away like it should. It remains hung up, half in the bag and half out of it. My mom tries to clear it, but she doesn’t have much time, and then the automatic activation device on her reserve canopy deploys. But just at that moment the main canopy finally works itself free, and the reserve flies right up into it and catches its lines, tangling the two of them together.

The two canopies wrap up into a long, swirling streamer—the pink main and the white reserve twisted together like some gigantic, deadly candy cane—and my mom is spinning under it. She’s so low that you can see her twirling as she jerks and tugs on the lines to free the reserve from the mess of the main. Angie’s screaming and she must be running, because everything gets bumpy and shaky. Then she drops the camera, and all you can see is grass, and all you can hear is screaming and crying. And then it ends. 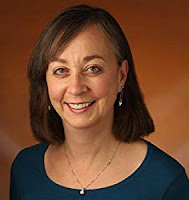 Tracy Barrett has written more than twenty books for children and young adults. She’s much too interested in too many things to stick to one genre, and has published nonfiction as well as historical fiction, mysteries, fantasy, time travel, myth and fairy-tale retellings, and contemporary realistic novels. She knows more about ancient Greece and Rome and the European Middle Ages than anyone really needs to know, can read lots of dead languages, and used to jump out of airplanes.
A grant from the National Endowment for the Humanities to study medieval women writers led to the writing of her first novel, the award-winning Anna of Byzantium(Delacorte). Her most recent publications are a contemporary YA novel, Freefall Summer, which draws on her own skydiving adventures; a middle-grade fantasy entitled Marabel and the Book of Fate; The Song of Orpheus: The Greatest Greek Myths You Never Heard, a collection of little-known Greek myths; and the popular middle-grade series The Sherlock Files.
From 1999 to 2009 Tracy Barrett was the Regional Advisor for the Midsouth (Tennessee and Kentucky) with the Society of Children's Book Writers and Illustrators. She is now SCBWI's Regional Advisor Coordinator.
Tracy grew up near New York City, and went to college in New England and graduate school in California. She holds a Bachelor's Degree with honors in Classics-Archaeology from Brown University and an M.A. and Ph.D. in Medieval Italian Literature from the University of California, Berkeley. She was awarded a grant from the National Endowment for the Humanities to study medieval women writers and won the Society of Children’s Book Writers and Illustrators Work-in-Progress Grant in 2005. She taught Italian and other subjects at Vanderbilt University for almost thirty years. She has two grown children and lives in Tennessee with her husband and two Cavalier King Charles Spaniels.
PHOTO CREDIT: JENNY MANDEVILLE/VANDERBILT UNIVERSITY 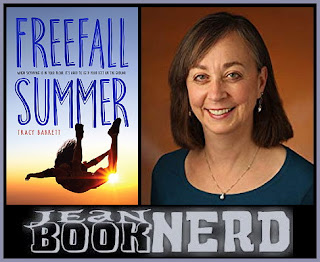 - 1 Winner will receive a Copy of FREEFALL SUMMER and Swags (signed bookplate and a silver skydiving pendant) by Tracy Berrett.