Striking Out by Scarlet Bennett Blog Tour and Giveaway!

Welcome to my tour stop for Striking Out by Scarlet Bennett!  The tour runs August 17 - September 11 with reviews, interviews, guest posts, excerpts and giveaways. Striking Out is an adult Australian contemporary. The dialogue and and characterizations are distinctly Australian. Check out the tour page for more information.

Sparkling with distinctive Australian humour, this action-packed novel follows one small-town girl’s fight to reach the top.
Sharon Jackson is a small-town girl with big-city dreams. Forced out of her home in regional Western Australia with her singing career in ruins, she hits the big smoke in search of stardom. After signing with a sleazy agent who wants more than a ten percent cut of her earnings, she struggles to earn a place in the macho world of rock-‘n-roll, encountering a series of colourful characters along the way – like Todd, the sexy, brooding muso with a dragon tattoo and Kevin, the whip-smart fighter with some hidden demons of his own.But when her troubled past follows her to the city, Shazza’s dreams begin to unravel. With no home to go back to and a past that won’t stay buried, everything she has worked for is on the line. Shazza must make a decision that will define the course of her future, and time is running out.

‘How’s business, Des?’ Todd said.
‘Pumping, mate,’ Des said, ‘pumping.’
‘What about us?’ Todd said with annoyance in his voice. ‘How’s our business?’ His fists were clenched and his biceps rippled with tension. When he flexed his muscles, the dragon tattoo on his right shoulder looked like it was alive.
Des had a smile fixed on his face but his eyes were darting all over the place. ‘All your regular gigs, of course – I always look after my most important clients, you know that – plus a few other possibilities.’ Des tapped his nose and winked as if he had some sort of secret up his sleeve.
Todd’s expression was hard and his eyes were cold. ‘Tell me about those possibilities.’ The dragon came alive again. ‘You’ve been crapping on about possibilities for months now, and nothing’s come of it yet.’
Des was breathing fast, and as he undid the top button of his shirt I could see that he was sweating. ‘Top level negotiations take time. You know that.’ Des was talking fast. Too fast, it seemed to me. ‘Let’s just say that I’ve been talking to some high flyers about you, Todd. Real high flyers, if you know what I mean.’ He tried to wink again but it came out as a kind of twisted grimace.
The dragon flew towards Des’s throat but stopped just short. I saw Des flinch as Todd’s hand gripped his shoulder. ‘We’re not auditioning for the trapeze, Des. We just want to get out of this hole. We need to head east.’
‘All in good time,’ Des stammered. ‘I’m working on it, I assure you. I’m going to have some big news for you soon. Big news.’
Todd snorted. ‘To match your big percentage, no doubt.’
Des squirmed. ‘You know I always look after you.’
‘From what I can see,’ Todd raised his eyebrows and tightened his grip on Des’s shoulder, ‘you mostly look after yourself.’ He released Des’s shoulder and stepped back. ‘Get back to me when you’ve got something concrete to talk about. I’m starting to wonder if you’re the right man for us, to be honest, Des. I’m disappointed. The lads and I are going to have a little chat about our situation soon, if you know what I mean.’ He turned and walked away, radiating attitude like a growling Harley.
Des rubbed his shoulder. ‘Don’t do anything hasty,’ he called out. ‘I’m working on a major opportunity here. We’re talking major. It’s just taking a bit of time to sort out the loose ends.’
‘Don’t take too long,’ Todd said, not even bothering to turn back. It wasn’t until the dragon had disappeared from view that I realised I’d been holding my breath.

About the Author: Scarlet Bennett spent her formative years in regional Western Australia, and it shows. Years  of city living have softened her broad accent, but the slang she’s stuck with. After earning a Masters degree in Psychology, the colourful characters of her childhood – and that irrepressible Aussie spirit – found their way onto the page. She is a graduate of Allaboutwriting’s mentoring program, and lives in Canberra with her husband, kids, and far more animals than can reasonably fit on a suburban plot.


GIVEAWAY:
10 sets of earrings handmade by the author (INT)
Ends September 2nd
Prizing provided by the author, hosts are in no way responsible.
All earrings are made with sterling silver and semi-precious gemstones. The gemstones included are turquoise, rose quartz, red agate, freshwater pearls and amethyst. 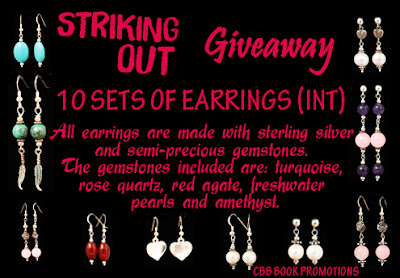