Welcome to my tour stop for Making Angel by Amanda Washington! This is a new adult mafia fiction. The tour runs November 9-20 with reviews, interviews, guest posts and excerpts. Check out the tour page for more information.

Heir to a powerful Las Vegas crime family, D’Angelo Mariani’s survival depends on his ability to prove his value to his father. Forced out of the technology lab and into the underworld, Angel is on the brink of pulling off the impossible when he runs into a captivating humanitarian who changes everything.
Markie Davis is all about compassion, service, and the ultimate adrenaline rush. After a year-long stint volunteering in an African orphanage, she’s in Vegas to check up on her wayward little sister. Markie never anticipated meeting someone like Angel.
While Angel always believed he’d be the one with explaining to do, as war sparks between the Vegas crime families, it’s Markie’s secrets that might just cost them both their lives… 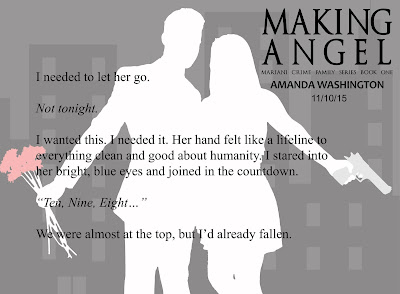 Where do your ideas come from?
Different places. Dreams, suggestions, experiences. The idea for Making Angel came from a traffic stop I witnessed that got a bit out of control. I don't know what was going on, but police officers swarmed the vehicle and my writer brain kicked in, developing the scene with Officer Hill in chapter one.

How do you develop your writing ideas?
I day dream quite a bit. Also, I have several friend who write and edit and we sometimes get together and brainstorm, usually in public places where we can terrify eavesdroppers with talks of offing people (characters. Mostly). There's probably an FBI file on us somewhere.

Where do you find inspiration for your characters?
I often Frankenstein characters together out of traits I see in people. Mix this person's sarcasm, that person's sense of humor, that person's parental issues... and bam, you get a smart-mouthed punk with crazy amounts of respect for single moms. Sure, why not?

When did you first realize you wanted to be a writer?
Long about book three, and it was more of an act of submission in the interest of self-preservation than any conscious decision to become a writer. When characters truly assault your brain, you have no choice but to write their stories. Seriously. I wonder how many unrealized authors are locked away in asylums right now. Hmm. That's a possible story line...

What makes you unique as a writer?
Both my reading and writing preferences are super eclectic. I want to read and write everything. Well, everything fiction that is.

What writers inspire/d you?
My best friend--Tracey Jane Jackson--because she's a self-published author who's got this business down. She knows and understands her audience, has written more than twenty books, has introduced me to her incredible editor, and still makes time to teach self-published authors how to properly format (and yells at us when we don't!). Oh, and she just made the NY Times Bestseller list. Congrats Tracey!

How has your writing career changed since you started?
At first everything sounded so forced--actions, emotions, relationships. I kept writing and editing and reading, desperate for my prose to seem as effortless and natural it is in the books I love. It's a process.

What does your writing process look like?
Honestly? Moments of misdiagnosed brilliance sprinkled throughout months of constant research and writing while trying not to drown in self-doubt. Then my manuscript gets ripped apart by brutal editors until it becomes something I'm excited about... that I'll probably want to edit again six months later.

What would you say is your interesting writing quirk?
I fidget a lot. And whenever I get stuck I roam around the house like a ghost only half in this world.

What are your writing goals for the next year?
Finishing the next book in the Mariani Crime Family Series (Breaking Bones), and I'm actually working on something new and crazy. Yes, super crazy. I'd tell you what, but it sounds even crazier when I write it down.

Name the five biggest distractions from your writing.
Housework, cooking, the internet, real people who expect me to be social, and my part-time job.

What character would you most like to be stuck in an elevator with?
Markie. We'd make plans to go skydiving or bungee jumping or something.

Do you hear from your readers much? What kinds of things do they say?
I hear from some, but I think the biggest misconception about authors is that we don't care what readers think. Are you kidding me right now? I LOVE feedback. It's great to know when you're hitting as well as missing. When I get open, opinionated readers I turn them into beta readers.

What’s the best vacation you ever had?
Kauai with my husband for our tenth anniversary. Magical time. I want to go back... as in right now.

What’s your favourite rainy day movie?
So I Married an Ax Murderer, because Woman. Whoa-man.

If you could be any age again for a week, which would you choose and why?
Here and now. I try not to live in the past.

If you could have personally witnessed one event in history, what would it be?
The Civil Rights Movement. I'd want to know how they organized that many people without a single cell phone and be part of something so incredibly world-changing.

What's you favourite place to read?
Bed. The sofa. The other sofa. The floor. My car. The bathtub. Hidden in the closet. Wherever I get five minutes with nobody bugging me.

When you walk into a book store, where do you head first?
Fantasy.

If you had a million dollars, what would be the first thing you would buy?
A coffee shop/gamer paradise/bookstore. Well, we'd have to build it because it doesn't exist, but man would it be magnificent.

Amanda Washington first put her dreams to paper in 1999. MAKING ANGEL is the first book in her new adult mafia fiction series, but she's also written dystopian (RESCUING LIBERTY and LIBERTY'S HOPE) and young adult (FALLEN, CUT, FORSAKEN). When she's not writing, she's busy living out her real adventure in southwest Washington with her husband and their five boys.

Prizing is provided by the author, hosts are not responsible. Must be 13 or older to enter and have parental permission if under 17. Void where prohibited by law. No purchase necessary to win. 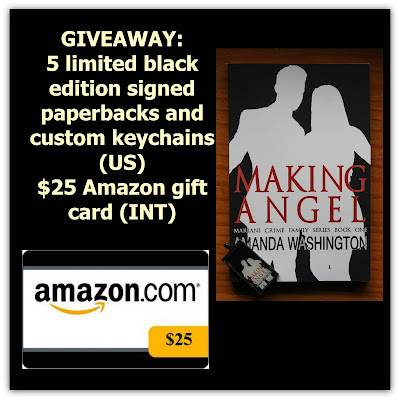