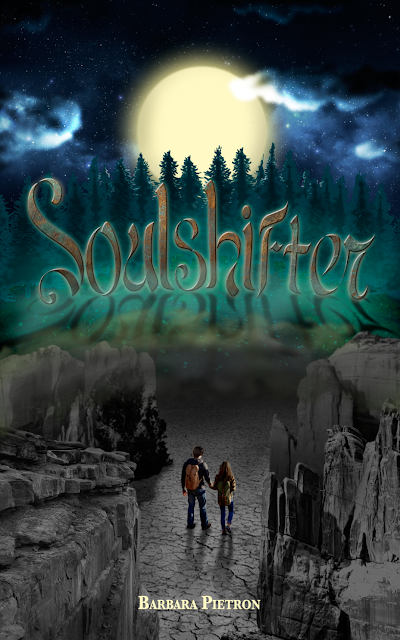 Sixteen-year-old Jack Ironwood knew exactly what he wanted. Until he got it.
Jack was content to stay unnoticed by pretty and popular track-star, Natalie Segetich, until he overhears her claim that something took her friend Emma. As a soulshifter who can cross into the underworld, Jack knows the human-stealing Enuuki—hell's messengers—are real and that a successful rescue mission would secure a future otherwise out of his reach. Working together, Jack and Natalie devise a plan to outwit the ruler of the underworld. Then on the eve of the quest, as Jack stands on the verge of seeing his dreams come true, he realizes he's no longer sure what he wants. But it's too late to back out. Pursued by the dark lord's henchmen and ghastly mutant creatures, Jack and Natalie struggle to come out ahead in a battle and barter for souls. In the end, Jack will have to decide his own fate, because nothing short of a deal with the devil will get all three of them out of hell alive.

They gathered their supplies at Jack's house and said goodbye to his parents. Jack's mom hugged him extra-long and then squeezed his hands. "I'll call school in the morning," she said. "Even if you're back by then." She hugged Natalie too.
"Watch each other's backs," Jack's dad said as they stepped off the porch.
"Did you make arrangements for someone to call school for you tomorrow?" Jack asked.
Natalie shook her head. "I took care of it today. I'm accompanying my dad on a weekend business trip." She grinned, but uncertainty held her eyes tight.
They stopped for gas just outside of town and Jack picked up a large cola to keep him fueled up. Natalie declined his offer for something from the gas station convenience store, opting to drive through a coffee shop just up the road for a large mocha. By the time they were on the road to Mesick, it was just after ten o'clock. Natalie turned on the radio and they rode for while, lost in their own thoughts.
Jack should have been thinking about facing down the ruler of the underworld, but he wasn't. He was thinking about Natalie. Yesterday. The thrill of seeing her face light up when he rounded the corner to meet her. The way her small hand felt in his, soft and strong at the same time. How she was just the right size to fit in the crook of his shoulder, as if she belonged there. She was right. Their pretend relationship had been too real.
So what happened if their trip to the underworld was successful? Would they assimilate back into their previous lives? The occasional 'hi' at their lockers?
God, he hoped not.
He pictured the doubtful evaluation Natalie's dad had given him when they were supposedly working on a project together. How would her dad look at him if he arrived to take her on a date? No, he didn't think it would fly. The Jack Ironwoods don't get the Natalie Segetiches.

Regardless of what the future may hold, he promised himself one thing. Natalie was coming back. Alive. Whatever it took.

After years in the corporate world, Barbara found herself with a second chance to decide what she wanted to be when she grew up.  Her lifetime love of books and the written word returned one answer: writer.  Drawing from her experience with technical writing, she began by writing non-fiction magazine pieces and achieved both regional and national publication.  Her success encouraged her to complete a novel.  She learned much from her first manuscript, critiques, books, contests, and blogs.  In 2012, her novel Thunderstone, was a quarterfinalist in the Amazon Breakthrough Novel Award contest and won a critique by Publisher's Weekly.  A few months later, she was offered publication by Scribe Publishing Company.

Barbara has a few other novels in the works, including a Thunderstone sequel. If she's not reading or writing, Barbara likes to walk, garden, and sew.  She works in a library and lives in Royal Oak, Michigan with her husband, daughter, and their cat – who often acts like a dog.