Marked by an Assassin by Felicity Heaton Blog Barrage!

Marked by an Assassin, the eighth book in New York Times best-seller Felicity Heaton’s hot paranormal romance series, Eternal Mates, is now available in ebook and paperback. To celebrate the release, she’s holding a FANTASTIC GIVEAWAY at her website and sharing sneak peeks of the book. 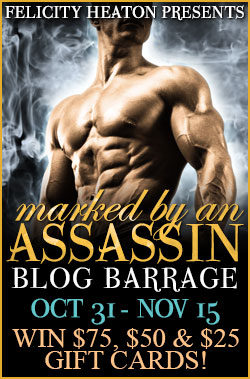 Find out how to enter the Marked by an Assassin international giveaway (ends November 15th) and be in with a shot of winning a $75, $50 or $25 gift certificate at her website, where you can also download a 4 chapter sample of the novel: http://www.felicityheaton.co.uk/marked-by-an-assassin-paranormal-romance-novel.php

Here’s more about Marked by an Assassin, including an excerpt from this paranormal romance novel. 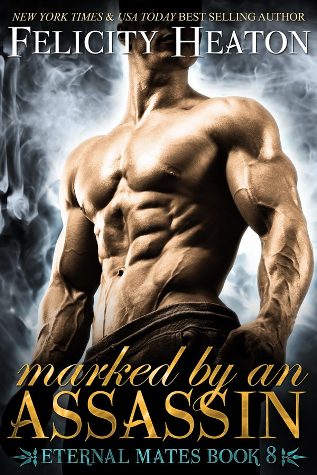 A snow leopard shifter exiled from his pride twenty years ago, Harbin treads the dark path of life as an assassin, driven by a hunger for vengeance, mercilessly hunting the Archangel members who attacked his kin, murdering his mother and sister.
When a new contract comes in and the mark is a snow leopard shifter, he can’t resist venturing into the mortal world on a personal mission to find out why one from a normally peaceful species now has a price on their head. What he finds in a rundown nightclub isn’t quite what he expects—a beautiful snow leopard female that awakens a fierce hunger inside him.
Aya has spent seventeen years living in London, immersed in the underbelly of the fae world, keeping her head down and her tail out of trouble. But when trouble walks right into her life in the form of a sinfully handsome, dangerous assassin, she is pulled into a whirlwind of events that stir up the nightmares of her past but might just give her a shot at putting those ghosts to rest—if she can resist the dark allure of a male she knows is her fated mate.
Can Harbin and Aya resist the passionate fire that blazes between them as they chase the vengeance they both crave? Or will they surrender to their deepest desires?

Marked by an Assassin is available from Amazon Kindle, Kobo Books, Barnes and Noble Nook, Apple iBooks stores and other retailers. Also available in paperback. Find the links to your preferred retailer at: http://www.felicityheaton.co.uk/marked-by-an-assassin-paranormal-romance-novel.php

Marked by an Assassin is available from Amazon Kindle, Kobo Books, Barnes and Noble Nook, Apple iBooks stores and other retailers. Also available in paperback.

Find all the links, a fantastic 4 chapter downloadable sample of the book, and also how to enter the giveaway and be in with a shot of winning a $75, $50 or $25 gift certificate at her website: http://www.felicityheaton.co.uk/marked-by-an-assassin-paranormal-romance-novel.php