Debut Author Bash: If I Fix You by Abigail Johnson and Giveaway!

Welcome to the Debut Author Bash!! Today I get to feature Debut Author Abigail Johnson. Find out about her book below!! She was also kind enough to answer some of my questions, so I hope you will show her some love in the comments. 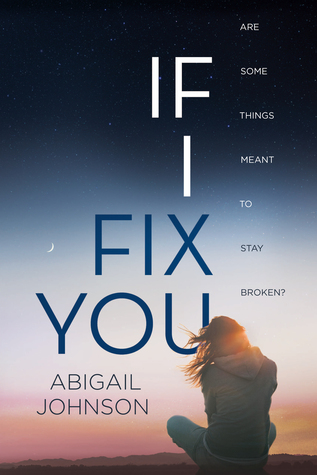 Readers of Sarah Dessen, Cammie McGovern and Morgan Matson will adore this thought-provoking, complex and romantic contemporary novel from debut author Abigail Johnson, about finding the strength to put yourself back together when everything you know has fallen apart.
When sixteen-year-old Jill Whitaker’s mom walks out—with a sticky note as a goodbye—only Jill knows the real reason she’s gone. But how can she tell her father? Jill can hardly believe the truth herself.
Suddenly, the girl who likes to fix things—cars, relationships, romances, people—is all broken up. Used to be, her best friend, tall, blond and hot flirt Sean Addison, could make her smile in seconds. But not anymore. They don’t even talk.
With nothing making sense, Jill tries to pick up the pieces of her life. But when a new guy moves in next door, intense, seriously cute, but with scars—on the inside and out—that he thinks don’t show, Jill finds herself trying to make things better for Daniel. But over one long, hot Arizona summer, she realizes she can’t fix anyone’s life until she fixes her own. And she knows just where to start . . .

Where do your ideas come from?
Everywhere. I pick up things from what I read, watch, and listen to. Other times I can’t point to any one specific influence. The idea for IF I FIX YOU came from a image in my head of a girl on her roof talking to a boy leaning on his fence next door. But the book I wrote after that came from watching an old episode of The Wonder Years.

How do you develop your writing ideas?
I just have to write them. I’m not an outliner (what I wouldn’t give to be able to outline). I almost always begin with character and let the story and everything else build from there. That usually involves asking myself a lot of question. I very rarely plan ahead, I just write and see what happens.

Where do you find inspiration for your characters?
This also comes from everywhere. I do draw inspiration from people I know or I’ve met, but mostly, I think about my characters as various shades of myself. That sounds insanely narcissistic, but good or bad, I’m reflecting some part of myself in my characters—some more than others.

When did you first realize you wanted to be a writer?
I’ve always been a writer, but it wasn’t until college that I realized I wanted to be an Author. I was taking a class called Personal and Exploratory Writing and loved it. I followed that with creative writing classes, and poetry classes, and this thing I liked doing, writing, blossomed into this thing I could actually pursue professionally.

What makes you unique as a writer?
I broke my neck in a car accident when I was seventeen and the resulting spinal cord injury paralyzed me from the chest down. I spent months in the hospital regaining the ability to breathe and speak, and many more months after that in physical and occupational therapy reclaiming every possible arm and hand movement I could. I spent a lot of time describing what I wanted (first by blinking at letters on an alphabet board, and later with words). I had to think about my words very carefully because communicating back then was such a laborious process. As an author, I still think carefully about my words, even though I no longer have to struggle saying or typing them. I also think that surviving something so traumatic at such a young age has given me a unique perspective on life, especially life as a teenager.

What writers inspire/d you?
Growing up it was Laura Ingalls Wilder and Judy Blume (I used to camp out in my closet with a sleeping bag and a flashlight and read them for hours). I’ve always been a voracious reader, and a wide one at that, but within the YA sphere—which is my favorite—I have long adored Maggie Stiefvater, Rainbow Rowell, John Green, Huntley Fitzpatrick, Kasie West, Morgan Matson, Jenny Han, and of course THE Sarah Dessen. I have more listed on the About page of my website.

How has your writing career changed since you started?
Considering that I didn’t have a writing career until this year, I’d say a lot :) I now regularly use phrases like, “My agent called” or “I just heard back from my editor” and it still blows my mind every time.

What does your writing process look like?
I like to start writing as soon as possible when I wake up, otherwise it’s too easy to get sucked into social media and returning emails and lose the entire morning before I know it. I try to write M-F (Saturdays and Sundays when I can) for however many hours it takes to reach my word goal (1-2k words a day depending on the timeline I working with). I end up doing Two-A-Days when I’ve got a deadline, writing during the day, breaking for dinner and the evening, then writing for a few more hours after everyone else has gone to bed. I set self imposed goals and deadlines even before I had an agent and I’m pretty good about sticking with them. I know some authors use sticker calendar systems to keep them accountable, I prefer the reward method. If I meet a goal/deadline I buy something I want but don’t need, like new eyeshadows from Makeup Geek.

What would you say is your interesting writing quirk?
I love having music and creating playlists for specific characters and scenes, but I write all my first drafts with RainyMood.com playing. Second and third drafts are when I typically start pulling songs into the mix.

What are your writing goals for the next year?
I’m working on a new contemporary YA right now, so I’d love for that to be officially on the publication schedule. I’d also love to polish a YA thriller I recently wrote, and I like to write another contemporary too.

Name the five biggest distractions from your writing.
Social media, fiddling with my website, designing swag or graphics, cats who insist on sitting directly on my keyboard and/or head, reading all the awesome YA books that keep coming out.

What character would you most like to be stuck in an elevator with?
My protagonist, Jill. She’d figure out a way to fix it and get us out.

Do you hear from your readers much? What kinds of things do they say?
I hope to hear from my readers once they’ve had a chance to read IF I FIX YOU. I’ve heard from people who are excited to read it, and they’ve been awesome.

What do you like to do when you're not writing?
Read more than anything, but I’m also a gamer (I cannot wait for Uncharted 4 to release) and a big movie lover.

What’s the best vacation you ever had?
I’ve been to Mexico countless times and I love it more every time I go.

If you could be any age again for a week, which would you choose and why?
I’d go back to those pivotal teenage years and research my next dozen books.

If you could have personally witnessed one event in history, what would it be?
Not an event so much as a time. I would kill to see dinosaurs.

What's you favourite place to read?
In bed at night.

When you walk into a book store, where do you head first?
YA. No contest.

If you had a million dollars, what would be the first thing you would buy?
I’m totally thinking about the Bare Naked Ladies song now. I’d buy a house with a library exactly like the one in Beauty and the Beast.

Abigail was born in Pennsylvania. When she was twelve, her family traded in snow storms for year round summers, and moved to Arizona. Abigail chronicled the entire cross-country road trip (in a purple spiral bound notebook that she still has) and has been writing ever since. She became a tetraplegic after breaking her neck in a car accident when she was seventeen, but hasn’t let that stop her from bodysurfing in Mexico, writing and directing a high school production of Cinderella, and publishing her first novel.

1 finished copy of IF I FIX YOU, open Internationally.