Hi guys, welcome to another Author feature for my 3 year Blogversary!! This time I'm featuring Yvonne Ventresca. Below are details of her books. I read and loved Pandemic, see my review below, and am excited to read her new book!!

Even under the most normal circumstances, high school can be a painful and confusing time. Unfortunately, Lilianna's circumstances are anything but normal. Only a few people know what caused her sudden change from model student to the withdrawn pessimist she has become, but her situation isn't about to get any better. When people begin coming down with a quick-spreading illness that doctors are unable to treat, Lil's worst fears are realized. With her parents called away on business before the contagious outbreak-her father in Delaware covering the early stages of the disease and her mother in Hong Kong and unable to get a flight back to New Jersey-Lil's town is hit by what soon becomes a widespread illness and fatal disaster. Now, she's more alone than she's been since the "incident" at her school months ago.
With friends and neighbors dying all around her, Lil does everything she can just to survive. But as the disease rages on, so does an unexpected tension as Lil is torn between an old ex and a new romantic interest. Just when it all seems too much, the cause of her original trauma shows up at her door. In this thrilling debut from author Yvonne Ventresca, Lil must find a way to survive not only the outbreak and its real-life consequences, but also her own personal demons.

Lilianna is your typical girl except she likes to be prepared and stock food and emergency things. Her father works in a place that deals with diseases etc. He often comes home with stories for her so she hears it all first hand. She wasnt always like this. She was a model student and happy go lucky girl but when a traumatizing thing happens to her she draws into herself. She becomes the person she is.

She hears on the news that a flu has shaken some parts of America. People are coming down with it fast and a lot are dying. She is worried but not very. Then she starts hearing more and more news of deadly outbreaks closer to home and her parents are called away to cover the outbreak. She starts to get more food and essentials just in case. Then the flu hits home. Neighbours and friends are coming down with it and many are dying. School and businesses close down and the whole place grinds to a halt.

Lil is walking one day when she hears a baby crying non stop. She goes to the door only to find the mother dead and a baby in a crib. She has no choice but to take the baby home with her till she can find someone to card for him. She knows she has enough food and water for a while and that she will be ok, that is until she goes home to find she was looted. They took everything. What will she do? Who can she trust and with everyone dying will she be next?

Well, this surprised me. I really really enjoyed it. It felt like something that could happen so was really creepy to read.

I felt for Lil. After what happened her she finds it hard to trust. She has become a food hoarder because she feels the need to be prepared since she wasn't before. When the flu hits she struggles with staying indoors and being safe or going to help people. She finds it hard to share her food and medicine because in her mind its the only thing she can control. Even with her internal struggle she does what she has to and I admire her for it. She overcomes a lot of her fear.

There's a bit of romance through all the heartache. I didn't like the kinda love triangle. She doesn't know if she wants to get back with her ex or to go for the new guy. Im glad with who she did choose because he was awesome. The romance isn't a main issue of the book but I enjoyed it all the same.

I loved that the author put so much detail into the flu. It was realistic and down right scary. The idea that a Pandemic can happen is something we all think about every time we hear about an outbreak, like the birdflu or swineflu. What would we do and how would we survive. This is exactly what Pandemic is about, its a story of the struggle and heartache of a Pandemic. Its heartbreaking when Lil looses people close to her but yet she has no choice but to go on and survive. It definitely makes you think.


Pandemic is well written with pleanty of action. The pacing is fast and the plot is believable. When I started reading it was so hard to put down because I needed to see what happens next. Its a story of survival and beating the odds. I will definitely keep an eye on this author. Highly enjoyable and I've no problem recommending. 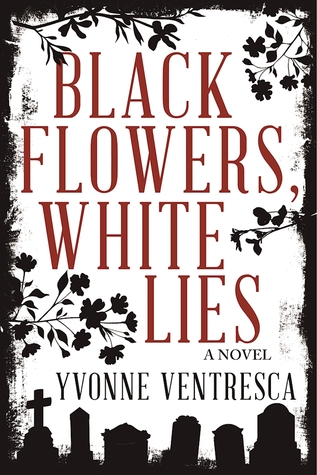 
Her father died before she was born, but Ella Benton knows they have a supernatural connection. Since her mother discourages these beliefs, Ella keeps her cemetery visits secret. But she may not be the only one with secrets. Ella’s mother might be lying about how Dad died sixteen years ago. Newfound evidence points to his death in a psychiatric hospital, not as a result of a tragic car accident as her mother always claimed. After a lifetime of just the two of them, Mom suddenly feels like a stranger.
When a handprint much like the one Ella left on her father’s tombstone mysteriously appears on the bathroom mirror, at first she wonders if Dad is warning her of danger as he did once before. If it’s not a warning, could her new too-good-to-be-true boyfriend be responsible for the strange occurrences? Or maybe it’s the grieving building superintendent whose dead daughter strongly resembles Ella? As the unexplained events become more frequent and more sinister, Ella becomes terrified about who—or what—might harm her.

Soon the evidence points to someone else entirely: Ella herself. What if, like her father, she’s suffering from a breakdown? In this second novel from award-winning author Yvonne Ventresca, Ella desperately needs to find answers, no matter how disturbing the truth might be.

Where do your ideas come from?

Since writing and revising a novel can span a year (or more), I like to choose situations and characters that fascinate me. For example, because a worldwide contagious disease can actually happen, the idea of a pandemic and its repercussions was intrinsically interesting. How would teens handle that type of disaster situation, and how would it differ from the way adults react? I also wanted to incorporate a main character (Lil) who is damaged before the onset, so I could develop her emotional journey throughout the novel.

Describe your book in 140 characters or less.

During a contagious outbreak, one teenage girl must face disease, death, and her personal demons in order to survive. Contagion for teens.

Tell us about the main character(s).
LILIANNA SNYDER is a 16-year-old student in a New Jersey high school. She’ll tell you her style is “Lazy Goth” and only be half-joking. It’s a big change from the floral skirts she wore six months ago. Her obsession is staying safe. She follows news alerts on anything potentially dangerous and stockpiles emergency supplies, but that won’t be enough. Megs is her BFF. She’s smart and loyal. Lil’s secret: She won’t talk about it with anyone except Megs.

JAY MARTINEZ is the new boy in town with a secret of his own. He’s tall, dark and lanky, with brown eyes, brown hair. His actor look-alike would be Alex Bechet, who plays Demi Lovato’s boyfriend in the video for “Give Your Heart A Break” (www.youtube.com/watch?v=1zfzka5VwRc). His obsession is keeping his younger brother, Tyler, safe from the flu and other dangers. Jay’s secret: When he moved from Phoenix, Arizona, he purposely left his past behind.

THE DISEASE: H5N1, or as the media calls it, The Blue Flu. It’s deadly, it’s spreading rapidly, and it doesn’t care about anyone’s secrets.

If you could be any age again for a week, which would you choose and why?
I would definitely be a teenager again, around sixteen – it would be a great research opportunity for my writing!

Name the five biggest distractions from your writing.

Yvonne Ventresca’s latest young adult novel, BLACK FLOWERS, WHITE LIES will be published by Sky Pony Press in October 2016. Her debut YA novel, PANDEMIC, won a 2015 Crystal Kite Award from the Society of Children’s Book Writers and Illustrators. School Library Journal called PANDEMIC "an engrossing apocalyptic story” and Booklist said “this fast read will appeal to fans of Susan Beth Pfeffer’s LIFE AS WE KNEW IT. Her other works include the short story, “Escape to Orange Blossom,” which was selected for the dystopian anthology PREP FOR DOOM (2015), along with two nonfiction books, PUBLISHING (Careers for the 21st Century) and AVRIL LAVIGNE (People in the News). You can visit her website for more information: YvonneVentresca.com.

Giveaway: A paperback copy (US/Can only)