Happy book birthday to HOUND'S BITE, the fifth full-length novel in the bestselling, award-winning Ivy Granger urban fantasy series by E.J. Stevens!  We are celebrating this book release with a giveaway.

Keep reading for a chance to win an Amazon Gift Card and signed swag! 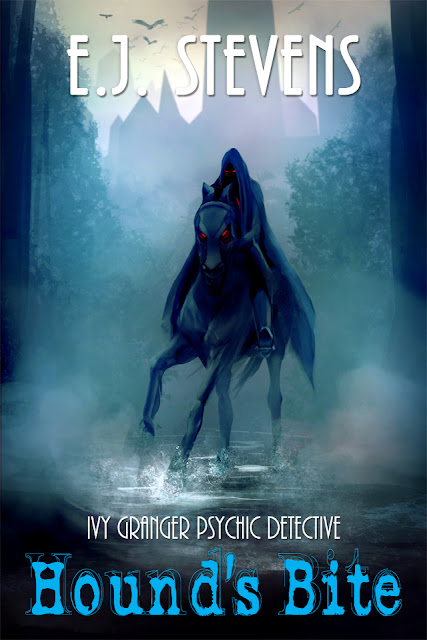 Ivy Granger thought she left the worst of Mab's creations behind when she escaped Faerie. She thought wrong.
In a cruel twist of fate, Ivy has unleashed a powerful horde of Unseelie beasts upon her city, turning her homecoming into a potential slaughter of innocents. Now Ivy must gather her allies to fight a reputedly unstoppable force—The Wild Hunt.
Will the training Ivy received in her father's court be enough to save her city, or will Harborsmouth be forced to kneel before the Lord of the Hunt? She is willing risk her own life, but some sacrifices come at a cost worse than death. When an ally is bitten by one of The Wild Hunt's hounds, Ivy must face the possibility that winning this battle may mean killing the one person she has come to love most.

Grab your copy today and enter a world of bloodsucking vampires, psychotic faeries, and kick-ass heroines.

We are giving away a $15 Amazon Gift Card and a swag pack with Hound's Bite swag signed by the author.


To enter, please use the Rafflecopter form below.  This giveaway is open to US/UK/CA. Giveaway begins on release day July 12, 2016 and ends July 25, 2016 midnight EST.