Today Jennifer Gooch Hummer and Month9Books are revealing the cover and first two chapters for OPERATION TENLEY, book 1 in the Fair City Files Series which releases September 13, 2016! Check out the gorgeous cover and enter to be one of the first readers to receive an eGalley of OPEARTION TENLEY!! 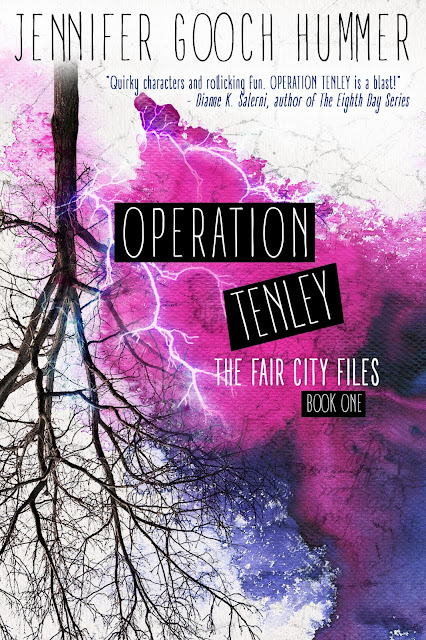 Meet Tenley Tylwyth, an Elemental Teen born with the power to produce weather. Cool? Not really.

Elementals make Mother Nature angry. And who can blame her? Humans have been destroying her planet long enough. It’s time she got rid of them all together. Tenley, and those like her, are the only things standing in her way—and they don’t even know it.
It’s a Fair One’s job to keep Elemental Teens safe. These ancestors of fairies have created a perfect plan to keep kids like Tenley out of harm’s way - from afar.
But when rookie Fair One, Pennie, allows her charge to use elemental powers once too often, she’s forced to travel to Earth—a place where no Fair One wants to go—to save her.
Now, Pennie has forty-eight hours to convince Tenley to stop manipulating the weather. But it won’t be so easy. Tenley’s got a way with wind and has no plans to stop using it.

But then a field trip provides the perfect opportunity for Mother Nature. She catapults Tenley deep into her gardens, where trees grow upside down and insects attack on command.

For Tenley, things get real, fast. And suddenly, knowing she’s got a few Elemental powers up her sleeve might be just what Tenley needs to survive. Even if it kills her.

Which is why today she stood outside in the busy quad wearing a sash draped over her left shoulder that read Vote For Me, Tenley T!

Behind her, a group of boys played Frisbee, while in front of her, students hurried by, ignoring the flyers she held out.

When the Frisbee flew straight toward Tenley’s head, none of the students noticed.

Holden Wonderbolt was a size or two skinnier than the other boys his age, with milk chocolate skin and impressive skateboard skills. He was on the way to the skate ramp when he spotted the Frisbee.

Tenley turned around just as Holden leaped off his board and launched himself forward. Instead of intercepting the Frisbee, though, Holden sailed toward Tenley while above them, the Frisbee spun off in the opposite direction.

Had others seen it, they would have wondered: Did that Frisbee just stop in midair, flip itself sideways, and zoom off in a completely different direction? But no one had seen it. Not even Holden, who was busy preparing to land on Tenley.

This is what Tenley did: step back.

This is what Holden did: (crash) land.

This is what the rest of the students did: stare.

Oh, and a few photos were taken and posted on the Internet within seconds.

Standard Fair One 3rdi’s were sufficient enough to see everything happening on Earth, even from the far edge of Fair City. But Laraby must have missed something. Why would his client ditch his skateboard and dive toward another student like that?

He tapped at his 3rdi and groaned, then flung it back over his head into its holder. “Piece of junk. A 3rdi-All wouldn’t have missed anything,” he mumbled. Laraby coveted 3rdi-Alls, which were infinitely better, but were only issued to Lieutenant Fair Ones.

Frustrated, he rubbed his bald head and stepped back over jagged rocks and dust, the latter of which was always the archenemy of his pristine white robes. He pulled a controller out of his tool belt and entered some information. A small hologram screen appeared. A few more clicks and the scene he had just watched on Earth projected in front of him.

There was Holden, skateboarding through the quad, when suddenly and without reason, he flung himself off and dived straight into an unsuspecting girl. Nothing in Holden’s immediate surroundings gave any indication of potential danger. Wind, humidity, barometric pressure, fire, temperature, tectonic plates—all normal.

Laraby pulled his eyes off the screen and sighed. Today he was not in the mood. He’d been hoping to grab a small bite, and now his client’s potential injury would eat into his lunch hour. He’d have to fill out an accident report, for one thing, and Holden Wonderbolt was getting dangerously close to his limit. Another injury could very well result in a red flag for Laraby, which might then lead to a review. And although Laraby did quite enjoy Holden Wonderbolt, he had to admit the boy was a bit of a klutz.

Laraby prepared for departure. The sooner he submitted the report, the better. City Hall was becoming ever more crowded and less efficient.

Just as his propellers started to activate, a loud whirring sound made him take pause. There was nothing wrong with his equipment, as far as he could tell. No damage that he could recall, and he was always on top of the updates. But the whirring noise increased. Perhaps it was another Fair One coming to share his ob-spot. This seemed to be happening more frequently, even though he always picked the farthest, most remote sites to observe his client.

Or perhaps it was asteroid winds picking up. He’d heard talk the last time he was in City Hall that Mother Nature and her Weathers were on the brink of infiltrating the Fair Force’s protective layer again. A stronger system had been implemented since her first infiltration, but no one knew if this was enough. Mother Nature and her Weathers were becoming increasingly hostile, which meant the clients on Earth were in even more danger. Time spent filling out injury reports was precious time away from monitoring them.

Dust picked up around him. He’d washed his robes only yesterday. Annoyed, Laraby stepped out of the swirling debris but stopped when an enormous wind tunnel appeared overhead, close enough to be dangerous. With no time to protect his gear, Laraby took cover under his arms, abruptly knocking the 3rdi sideways. He yelped. A Fair One’s tools were powerful but not indestructible and once damaged, were never quite the same.

He waited for impact, but nothing happened. He peeked up at Fair Force, three of them, hovering a few meters above. Their badges were visible, and red sirens flashed over their propellers.

“Fair One lara b3. You are under arrest. Anything you think can and will be used against you. You are hereby ordered to City Hall in three minutes. Failure to do so will result in further penalty.”

“Officers,” Laraby shouted above the noise. “I think you must be mistaken.”

The Fair Force typed into a small tablet. A pocket in Laraby’s tool belt buzzed. The arrest warrant was delivered.

City Hall in three minutes? He’d never been arrested before.

“Good day,” the Fair Force nodded, before propelling upward and zooming away as fast as they had come.

“It’s lunch time,” Laraby grumbled, activating his propellers again. As soon as he felt his feet lift, he tipped his head left and started for City Hall.

Jennifer Gooch Hummer is the award-winning author and screenwriter of her debut novel, Girl Unmoored (SparkPress). Girl Unmoored has also been published in German (Carlsen).  Jennifer has worked as a script analyst for various talent agencies and film studios. She lives in Los Angeles with her husband and three daughters.

3 winners will receive an eGalley of OPERATION TENLEY, International.