Welcome to my stop on the Blood Moon tour. I get to share a wonderful excerpt for you below, but you can check out the full schedule HERE. Don't forget to enter for the giveaway of the beautiful necklace!! 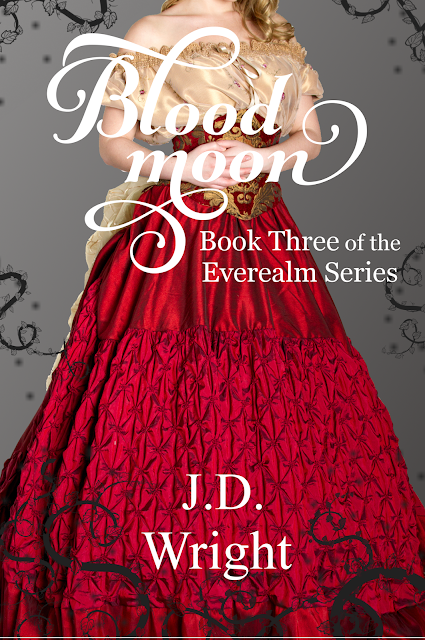 The aftermath of the wildfire has caused undesirable events to unfold in Everealm. When something precious is taken from Junacave, Bree and the others must hunt down a wizard and retrieve a stolen amulet in order to save their beloved. Little do they know, the amulet may very well be hiding secrets of its own.On her journey to a better life, away from Labara, Rianne discovers that being on her own is more challenging than she had predicted. Determined to escape her betrothal to King Carneath, she must do everything in her power to avoid being captured or else face a certain life of misery. Along the way, she stumbles upon a new ally, who may be the answer to her prayers.Bonds are broken, relationships are tested, and new love is forged under the Blood Moon, Book Three of the Everealm Series.

Rowan picked up a small piece of white lace and looked at it. Then he placed it back on the table and picked up another piece of lace from beside it.
“This is ridiculous. Why are you spending so much time looking at lace?”
“Because I need to choose one, of course, for the tabletops” Bree replied, walking around to the opposite side of the table.
“But they are all the same…”
“No, they aren’t.”
Rowan picked up a second piece and held it beside the other in his hand.
“They look identical.”
Finn leaned over the table and pointed to the first lace. “The flowers are the same, but the border is different,” he said.
Rowan shook his head. “Why don’t you just close your eyes and pick one?” He was met with widened eyes and looks of disgust on Bree and Finn’s faces. “Or not.”
“Each piece of silkwork requires a skilled hand and many days’ time,” Bree said. “To just pick one would be incredibly rude. You must admire each design, then carefully choose a pattern that will mirror the elegance of the ceremony.”
Rowan heard her speak, but he didn’t understand a word that she said. It sounded like rubbish created to pass the time. He knew that men typically left wedding ceremony planning to women, so he still didn’t understand why Bree insisted he be there. He doubted she cared for his opinion, anyway. “Perhaps, I should leave the two of you to this matter…”
“No!” Bree said, reaching across the table to grab Rowan’s arm before he could turn away. “We don’t need to choose lace at this very moment, but we do still need to... discuss the guests.”
“We already did that, yesterday. And it’s nearly bedtime now.”
“I meant to say the food. We need to discuss the food.”
Rowan narrowed his eyes. “Breestlin…”
Bree let go of his arm and straightened up. She tried to keep her face calm but hearing him say her name that way was a clear sign that he suspected something. If she didn’t convince him otherwise, she might as well kiss her plan goodbye.
“What? Why are you looking at me that way?” she asked.
“What did you do?”
“I haven’t done anything and I am insulted that you would even suggest it.” Her attempt at denial was useless. He could read her like a book.
“What did she do?” Rowan asked, turning to Finn.
“Don’t look at me. If she is scheming, it doesn’t involve me this time.”
“Sidonie,” Rowan said, looking at Bree, again. “Where is she?”
“Upstairs, I believe,” Bree replied. “With Sarita.” That much was true.
Rowan stared at her but didn’t say a word.
“Stop staring. It’s incredibly annoying, Rowan. Stop.”
“I know you’re up to something.”
“I am not. And even if I were, it is none of your concern.” She looked down and pretended to brush something off of her skirts.
“Ha! I knew it. Don’t you remember what happened the last time you interfered in matters that didn’t involve you?
“How was I to know that the fairy queen would force them to marry!” Immediately, Bree knew that she had told him exactly what he wanted to hear. The smirk he was now giving her was proof. Damn.
About the Author

Writing has always been a hobby of mine, beginning as a young child. It was a way to cope with losing my father at seven years of age. I started with poetry and was featured several times on the amazing poetry blog, Autumn Leaves, by Sondra Ball. My love for poetry soon led to writing songs in middle school and beyond, which I still do occasionally. Music has always been an important part of my existence, so writing songs came naturally to me. In high school, I started my own novel, however, life got in the way and I never finished it.
Fast forward many years later and I find myself married with three children, absorbed in my busy life with commitments to my family, work, school, church, and charities, among other things. One day I came across my old binder, with notes from my first novel, and it was with those notes that I conjured up the elusive Everealm.
I write to please readers such as myself, who have a love for fantasy and romance, but like a little danger and sex in their reading. I wrote the book with a mature audience in mind, who can appreciate a hearty imaginary world with magic and the unknown, but want more than fluffy love stories with wizards in them. They want the romance, magic, and danger, all wrapped into one.