The Girl and the Gargoyle by Pauline Gruber Blog Tour and Giveaway! 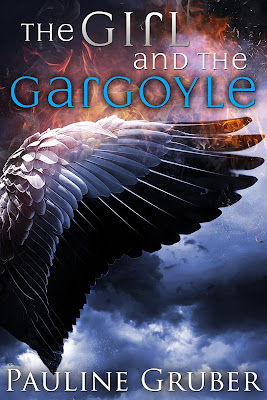 Being half-witch/half-demon and dating Marcus, a gargoyle and demon enemy, is complicated enough for Lucy. She can almost tolerate Jude, her demon father, forcing her to undergo combat training.
But when Marcus’s long-lost family returns to Chicago, her world begins to crumble. Marcus's mother wants him to leave to join the gargoyle clan; his father wants him to help kill Jude. There’s one major problem with this: if Jude dies, Lucy dies.
Marcus will do whatever it takes to save Lucy and her father. Meanwhile Lucy has her own plan and with the aid of a surprise newcomer, seeks help from the most unlikely—and dangerous—source.

Why did I allow you to talk me into this?”  Marcus rubs the back of his neck as he paces beside me. It’s impossible to read his expression in the near-darkness.“ Relax,”  Selima says. “ You’re going to love it. Tell him, Lucy.” Marcus moves to the other side of the clearing. A chorus of sounds ring out through the woods, the skitter of nocturnal animals moving over a blanket of twigs, leaves and brush. Two owls hoot, hoot to one another. “ But I tried this before. Twice. It was a disaster.”  He clears his throat. “ Maybe I can’t fly. You know...like...some protectors can and some can’t.” “ Why didn’t I think of that?”  Selima says, her tone mocking. “ While every protector I’ve ever known can fly, you’re the one exception. Silly me.” I burst out laughing then clamp my hand over my mouth, certain Marcus is glaring at me through the darkness. “ Let’s get this over with,”  Marcus mutters. “ That’s the spirit, little brother!”  Selima says. “ I need to change. Lucy, can I get my other shirt?” I toss Selima what can be best described as part T-shirt and part string bikini. I thought it would be better in the dark, not seeing them go through the change. Marcus groans, and I visualize the skin splitting along his back, feathers scraping muscle and bone as they struggle free. I imagine his pain and shudder. Selima whimpers once. Did she just morph instantly? “ You ready, little brother?”  Selima calls out. Sliding my cell phone from my pocket, I select the flashlight app and wave it like a wand in front of me. I gasp as Selima is illuminated. While Marcus’s wings are gray and white, Selima’s are white with what appears to be a large, black spot on the left wing. “ Beautiful,”  I murmur. Marcus moves into the light and studies his sister’s wings. “ It’s like you have an extra eye.”  He points to the black spot. “ Creepy.” Selima shrugs. “ You ever hear of the evil eye? This is the opposite. It keeps me safe.” “ Says the girl who works for demons,”  I say. Selima arches an eyebrow at me before returning her attention to Marcus. “ I want you to forget what you’ve tried before. Assume it’s all wrong.” Marcus snorts. I expect him to come back with some smart aleck remark and am relieved when he stays quiet. Why’s he fighting this? Doesn’t he understand how lucky he is? He can heal people. He can control other people’s emotions. He’s strong and fast. And now he’s going to learn to fly.

Book One:
(cover linked to Goodreads)

1.  Tell us a little about yourself. How long have you been writing? What genre do you write?
I’ve been writing “seriously” for five years, although I’ve been dabbling most of my life. I write paranormal romance, fantasy adventure, contemporary romance, and science fiction for young adults. <LOL> Maybe it would it be easier to list what I don’twrite. Dystopian, steampunk, and horror.

2.  What inspired you to write this series?
The inspiration for The Girl and the Raven came while I was falling asleep one night and then it proceeded to rob me of sleep for a week. A sixteen-year-old girl from Lexington, Tennessee moves to Chicago and is nearly run over by a wealthy investor barrelling down the street. Turns out a demon is coming for the man’s son and this girl is the only one who can save him. It’s an over simplified version of the story, but there it is. I loved writing that book!

3.  Where/When do you do the most of your writing?
I write on the train while commuting to my day job. It’s fabulous because I can either plug in my earbuds and listen to one of my music mixes or keep my ears open and eavesdrop on interesting conversations. It’s great fuel for future characters and stories. I also write at my dining room table at home during evenings and on weekends.

4.  What do you think has been your biggest accomplishment?
Writing andpublishing my first two books. It’s the hardest thing I’ve ever done and the most rewarding.

5.  Do you have a favorite author?
Just one? Seriously? I’ll be nice and keep it to seven. Ann Patchett, Stephen King, Anne Rice, Neil Gaiman, JK Rowling, Stephenie Meyer, and Judy Blume

6.  Is there anything that you find particularly challenging in your writing?
Writing magical scenes. I have a dozen reference books on magic and witchcraft. And I consult with a woman who’s pretty knowledgeable about this stuff.

7.  Do you have any advice for other authors?
The first is to put your butt in the chair and actually write. It’s been said hundreds of times before, but it bears repeating.  Second piece of advice: persevere. I can’t tell you how many times I wanted to give up. Whether you suffer from writer’s block, anxiety, lack of time, lack of ideas, a ton of responsibility, the blues, lack of sleep, whatever it is, DON’T GIVE UP! Believe in yourself and your stories. I promise you, the satisfaction you will feel upon completing your book is unlike anything else. And, like one of my middle school readers recently pointed out to me“You’ve got big time bragging rights!”

Pauline Gruber is a self-professed music junkie, cat wrangler, and travel nut. She went to Paris in the 90’s where she discovered a love of three things: croissants, old cathedrals, and gargoyles. Deciding that the paranormal world could use a new kind of hero, Pauline translated her fascination with the protective gargoyle into a suspenseful love story. She is the author of the young adult series, The Girl and the Raven, The Girl and the Gargoyle and the forthcoming novel, The Girl and the Demon. By day, Pauline is a legal assistant for a Chicago law firm where she steals identities and incorporates them into her books. If you tell anyone, she’ll deny, deny, deny.  Pauline lives outside of Chicago with her precocious black cats.