Welcome to my stop  on the Embattlement tour! This series is awesome and I'm excited to be part of the tour. You can see all the blogs taking part HERE. 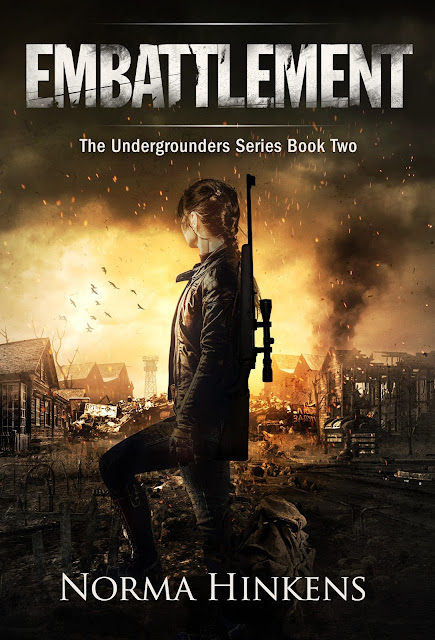 Against all odds, Derry and a handful of survivors have escaped the malevolent Doctor Lyong’s clutches, but victory proves bittersweet. No one knows if Owen is dead or alive. The shaky plan to rescue him falls apart when the Council splits over rumors of Owen’s ties to the Craniopolis.
Forced to find new recruits Derry makes the treacherous journey to Shoshane City, home of the mysterious riders. Behind the imposing barricade the city’s leader, Jerome, is hiding secrets. Mutiny and sabotage is afoot and Derry finds herself caught up in a desperate struggle to save the city from being destroyed by The Ghost, a man who swears allegiance to no one. Time is running out to save Owen, and tensions are rising between Jakob and Sven, who may turn out to be a deadly distraction.
Will Derry emerge victorious from the showdown at the Craniopolis, or will the price of freedom mean sacrificing the man she loves? 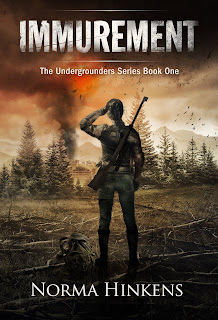 I trace the trigger housing onmy gun and count the remaining clones congregated around the room. We’re grossly outnumbered. And Owen is weaponless. This can’t end well if we don’t comply.

“ You have thirty seconds to accept my terms,”  Lyong says, a nettled edge to his voice. I shiver, picturing his one-eyed tic appraising mein a monitor somewhere ashe talks, his papery skin rippling with the effort of speech. I can’t see a way out of the situation that gives meany chance of saving Owen, other than to negotiate. Hesitantly, I raise my arms and step forward.

“ My brother’s injured,”  I yell. “ If you give us your word you’ll help him, we’ll turn over our weapons.”

My heart strains inmy chest. I’m counting on Mason and Sven to hold their fire. I wait for what seems like forever, steeling myself for Lyong’s response.

The intercom crackles to life, but Lyong’s words are drowned out in a barrage of gunfire. I pitch sideways beneath a conveyer belt and huddle in a ball, shaking. Debris pelts me from every angle; chunks of seat cushions, shredded medical tubing, shards of glass from exploding computer screens. A pungent chemical smell fills the air.

All over the room, disoriented Schutz Clones fly backward. I stare in disbelief as they writhe in death throes, ossifying before my eyes. Mason bolts across the floor and rolls under the belt beside me. His eyes gleam like cat’s eyes in the dim light. “ It’s the Council,” he yells, between breaths. “ They’ve penetrated the Craniopolis!”

I blink as I digest what he’s saying, my ears roaring.

Mason slams a fresh cartridge into his gun, his knuckles bleeding profusely. “ They must have triggered the explosion. They’ve been planning an attack for months.”

My brain slowly wraps itself around the information. There’s still a chance of getting out of here alive. I unload my pack and roll over into sniper position. “ Then let’s finish this.”  I lock eyes with Mason. “ For Owen.”

For news and special offers join Norma's VIP Reader List at http://eepurl.com/bDGdIX.Travel junkie, former professional globetrotter, legend lover, idea wrangler. Norma Hinkens has lived, worked and visited her way across continents, soaking up stories along the way. Her writing is influenced by the resilient characters she met along the way; everyone has a story!Norma grew up among vibrant storytelling traditions in her native Ireland. She's a legend-loving author who takes a fiendish delight in pushing reluctant characters over cliffs to find out what they’re made of. Epic odds, seemingly impossible missions, pasts that haunt, intrigue and misadventure. She’s happiest when wrangling provocative big picture ideas that are never black and white when you turn them inside out. It’s all about the tension in the journey.She currently resides in California with her husband, three children and Chihuahua extraordinaire. She is the author of the YA post-apocalyptic Undergrounders Series: Immurement, Embattlement and Adjudgement.