No One Dies in the Garden of Syn by Michael Seidelman Book Blitz and Giveaway! 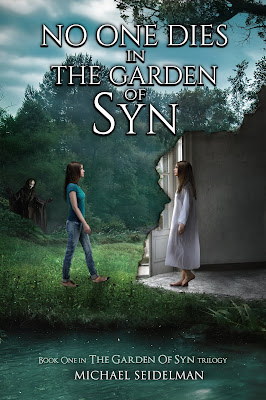 No One Dies in the Garden of Syn
by Michael Seidelman
Genre; YA Fantasy
Release Date: April 26th 2016


Synthia (Syn) Wade is a teenage girl who struggles with cystic fibrosis, an incurable life-threatening disease. One day she is pushed into a pond by an unseen figure and wakes up in a new world – a mysterious garden where illness and death don’t exist.Welcomed by the garden’s residents and now free of her symptoms, Syn decides to stay. But, before long, she realizes that this apparent utopia holds many dangers and dark secrets. Surrounding the garden is a fog that Syn is warned never to enter. She encounters bizarre creatures that defy reason. And always lurking in the shadows is a masked woman - a woman who may have a connection to the disappearance of Syn’s parents many years ago. A woman whom no one will speak of, but whom everyone fears.While No One Dies in the Garden of Syn, Syn will soon discover that some fates are worse than death.

“Honey,” Synthia heard her mom say, “You need to wake up.”
“Is it morning?” she asked, yawning and squinting on account of the bright ceiling light.
“No, Sweetie. Not yet.”
Synthia’s nose was dripping. Her mom wiped it and her upper lip with a tissue. “Your dad and I are going to take you somewhere. Some place wonderful. But we have to leave really soon so you need to get out of bed right away.”
“Can’t we wait until morning?”
“I’m afraid not, Sweetie. We have to get you dressed and leave tonight. You will love where we are going. I promise.”
Synthia reluctantly sat up and allowed her pajama top to be pulled off. The bottom of the undershirt had just been lifted when Synthia’s father walked in.
“Deb, Masie is outside.”
Her mother’s face turned white. She pressed her palms against each side of Synthia’s face. “Sweetie, we’ll be back in a few minutes. Please get dressed.”
After they left the room, Synthia listened to them thumping down the stairs, opening the front door and slamming it shut.
She was tired, not to mention bewildered, and didn’t want to go anywhere. She lay down, coughed lightly, and fell back asleep in less than a minute, despite the gleaming ceiling light above. If she had stayed awake for just one minute longer, she would have heard yelling outside, and seen a bright white light flashing through the window.
When Synthia woke, there was enough sun shining in, even with the blinds shut, that she didn’t notice the ceiling light was still on. She rubbed her eyes, wiped her runny nose with a tissue, and coughed until her throat was clear. She took a sip of water from the cup on her night table and checked the time; 9:32 a.m. She was late for kindergarten. Her mom usually awakened her at 7:30. Was that a dream, when her mom shook her awake last night? If not, why didn’t she come back?
Synthia coughed a few more times, put on some slippers and left the room. Her parents’ bedroom was empty. So were all the bathrooms and the bedrooms. The living room was empty, as were the dining room and kitchen. She tried to turn the knob on the basement door, but it was locked as always. She looked through the kitchen window into the gardens out back and didn’t see so much as a bird.
Synthia was more confused than worried. In the kitchen, she took her morning pills with a vanilla shake. The back door was slightly ajar, so she pulled the doorknob and stepped outside, curious.
A light wind ruffled her undershirt and pajama bottoms. A robin landed on a tree in the garden as a breeze rustled its leaves. There was no sign of her parents. Holding the handrail, she descended the stairs and peeked inside the carport. Both her parents’ cars were parked there. Now Synthia was no longer just confused. She was worried.
The basement window on the right side of the carport had always been covered by blinds, so she couldn’t see in. She knocked on the glass, hoping her parents were down there as they often were. Quiet taps at first, then harder and louder. Nothing. A tear rolled down her cheek, followed by another.
Now Synthia was more than worried; she was scared. She left the carport and went to the front of the house. The mailman was walking up the driveway.
Concerned to see this little girl, partially clothed and crying in the driveway, he bent down to her level. “Are you okay? Where are your parents?”
Synthia broke down, tears flooding from her eyes. Through the phlegm building up in her throat, she managed a quiet, yet desperate reply. “I don’t know.”

About the AuthorWhen Michael was growing up, his passions were reading, watching movies, enjoying nature and creative writing. Not much has changed since then.
Working in Online Marketing for over ten years, Michael felt it was time to pursue his passion as a career and wrote the first book in The Garden of Syn trilogy.Getting up every morning and sitting down to create new characters and bring new worlds to life is the most fulfilling job he’s have ever had. He is currently writing the second book in The Garden of Syn series and, beyond the trilogy, has many ideas plotted out that he looks forward to sharing with the world!
Michael was born in Vancouver, BC Canada where he continues to reside.