#FridayReveals: The Undertakers: The End of the World by Ty Drago Chapter 1 Reveal and Giveaway! #Month9Squad #Month9Books

Today Ty Drago and Month9Books are revealing the first chapter for THE UNDERTAKERS: THE END OF THE WORLD! Book 5 in the Undertakers Series which releases March 29, 2016! Check out the gorgeous cover and enter to be one of the first readers to receive an eGalley!! 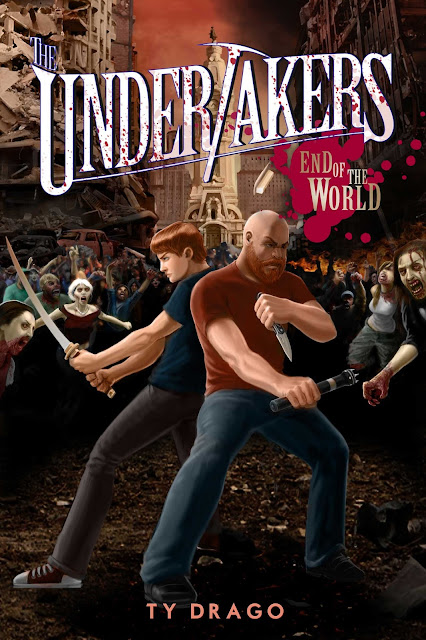 Think the Corpse War was over? So did Will Ritter until he was led through a doorway in time and finds himself in a future where the Earth has been all but destroyed. The Corpses, alien invaders who wear the dead like suits of clothing, have returned in horrific numbers. In the wake of their destructive onslaught, a rag-tag group of survivors with some of Will's now grownup friends among them is all that's left of mankind. Will must take part in a desperate, last ditch effort to rewrite history, prevent the Second Corpse War from ever happening, and defeat this evil that has consumed mankind once and for all. But victory, if such a thing is even possible, carries a heavy cost.

Folks don't sweat in dreams, do they?

“Ready?” the dude in the broken glasses asked.

The dreamer nodded, readying her javelin, feeling the familiar cold steel of its shaft in her strong fists. This wasn't the “real” javelin, of course. The dude in the broken glasses, the one who kept bringing her to this strange place while she slept, had told her that the “real” javelin was too unique and important to risk in a training exercise. But he assured her that this one was the same length and weight as the genuine article.

Whatever. It worked well enough. And she was getting good with it.

But then, she'd always had a knack with pointy things like this.

This was her fifth simulation tonight and the sweat of the last four stung her eyes.

Even in her scariest nightmares, and Heaven knew she'd had her share of those, in which she was either running from Corpses or defending the people she cared about from those undead invaders, she never sweated. Oh sure, when she woke up with a gasp of alarm or even a terrified cry, she was often soaked in cold, sticky perspiration.

But never during the actual dream.

Her eyes looked everywhere at once as she turned in a slow circle, surveying the dimly lit room. This place had a high ceiling, with walls and a floor all covered in white tile. It was big too, maybe sixty feet by thirty.

But with the lights off, it seemed even bigger.

That's 'cause I know what hides in this darkness.

The first mechanical monster charged her left flank, just a flash of movement, a shadow against other shadows. She got the impression of something large, with ten legs and a single piercing red eye.

No time to parry. So she dove, rolled, and felt the charging thing rush past her. Then, finding one knee, she thrust one of the javelin's two pointed ends up and out. It was one of the dozen moves that she'd been painstakingly mastering.

In these dreams, that is.

Her thrust struck home, the javelin's point jabbing deeply into the ten-legged monster's flank, knocking it over. The dreamer, still holding the weapon's other end, went with it, using its weight to leverage her to her feet before yanking the javelin free and spinning around, poised for the next assault.

Two of them came at her this time, ten o'clock and one o'clock. Their maws were wide open, rows of teeth shimmering in the darkness.

She went left, running straight at her nearest attacker, only to leap at the last second, putting one bare foot atop the monster's bulbous head and vaulting over it. As she did, she let her body tumble rearward, executing a backflip that allowed her to drive the javelin viciously into the creature's steel spine. As the weapon's point sliced through the thick armor, the dreamer's momentum pulled the javelin along, slicing open the creature's metal plating, exposing rent gears, severed cables and electronic circuitry that sputtered in its death throes.

The dreamer landed smoothly on her feet behind it.

And that's when the other one struck her.

As quick as she'd been, she hadn't been quick enough. She'd stupidly allowed the last monster to anticipate her, and now she was paying for it, her body a mass of pain as she was slammed against the floor and sent sliding along its tiled surface.

Somewhere in the surrounding darkness, she heard the dude with the broken glasses gasp in alarm.

Wincing, the dreamer rolled with the blow, controlled it, and managed to get her feet under her and the javelin up just as the ten-legged thing pounced at her for the killing blow.

This time, the weapon's point rammed straight up under the creature's chin, if you could call that place under its mouth a “chin.” Bracing herself, and ignoring the sharp agony that lanced up her left arm—wrenched, but not broken—the dreamer pushed harder, and harder still, until the javelin exploded out the top of the monster's head.

It toppled over as the other had.

“The crystal!” the man in the broken glasses cried. “There's the crystal!”

The dreamer looked up and saw it.

It shone brightly, high overhead, an enormous construct of glowing glass. It hung there, supported by nothing, pulsing with strange, unnatural energy.

Pushing away her pain and ignoring the sweat stinging her eyes, the dreamer planted one foot on the last monster's broken, lifeless body and yanked the javelin free. Then she spun, reared back, and hurled the shining shaft of pointed metal upward.

She watched it fly, cutting the air like a laser beam, almost seeming to glow itself.

It slammed into the hateful, malevolent crystal, piercing it deeply, and sending a splintering web of cracks running along the face of it.

“Yes!” the dude in the broken glasses exclaimed. As had often happened before, something in the sound of his voice struck the dreamer as familiar.

“It didn't break!” the dreamer exclaimed.

“It will,” the dude said, emerging from the shadows to her right. “It'll take a little over four minutes for the harmonic resonance to build up, but then it'll shatter spectacularly. You'll need to be gone by then.”

“Gone from where?” she asked.

Abruptly, the crystal vanished. The javelin, she now saw, was buried in the room's high ceiling, having pierced one of the white tiles.

An illusion, as always. “Hologram” was what the dude called it.

But illusion or not, after something like two dozen tries, I finally crushed it!

The lights came on, which was freaky, since there were no visible lamps.

The dreamer regarded the three broken creatures around her. Robots. Just metal and computer chips and what she supposed had to be some pretty hardcore programming. But the dude in the broken glasses had assured her that they were as close to the real thing as he could make them.

And the dreamer, who'd seen the real thing up close and personal, agreed.

The dude in the broken glasses wore a broad, toothy smile. The dreamer was certain that she knew that smile, and not just from her nocturnal visits to this strange place. She knew it from somewhere else, somewhere in the waking world.

“That was very well done,” he said.

“Thanks,” the dreamer replied. “Does that mean I graduated? Am I done comin' back here?”

The man's smile faded and he shook his head. “Not yet. You did get hit, after all. We need to practice until you don't. We need to get you to the point where those things don't lay a claw on you. Even so, you're doing wonderfully. Well beyond projections!”

“Thanks,” she said again. “But it'd help if I could practice with the javelin on my own time. These dream sessions are cool and all, but they ain't really enough to let me master a new weapon.”

The dude in the broken glasses shrugged. “They're all we've got.”

“Ain't you ever gonna tell me who you are?” the dreamer asked.

“Probably not,” he replied. “But you'll likely figure it out one day. For now, we should call it a night. Time's short for me this evening. He's coming.”

The dude considered before answering. Then, with a shrug, he replied, “Will Ritter.”

“Well, not to this exact room. But he's coming to this place and time.”

“And what place and time is that?” the dreamer demanded, bothered by the fact that poor Will was somehow being dragged into—whatever this was. Though, she supposed it shouldn't surprise her. Will Ritter was always in the thick of things, especially where the Corpse War was concerned.

But, as usual, the dude in the broken glasses didn't reply.

She'd been coming to this strange room for close to a month now, night after night, repeating the same exercise over and over. Each time she would fight the ten-legged monsters and then try to destroy the crystal. She didn't know what it was all for. She didn't know why it was happening, and had never been able to coax a straight answer from the man in the broken glasses, not even to the most obvious question:

Then, suddenly, an alarm sounded.

It rang somewhere outside the room, not blaring but loud enough to be easily heard. The dude in the broken glasses spun around with a startled gasp.

“What's that?” the dreamer asked.

“They've found us!” he replied, and the panic in his voice sent a sharp chill racing down the dreamer's spine. “No! It's too soon!”

He looked at her, a little desperately, she thought. But then he steadied himself and said, “You've done great work, but it looks like this is our last session after all. Thank you for your efforts and your patience during this past month. You're as strong as I remember you being. I'll send you home now.”

“Wait!” the dreamer exclaimed as the dude in the broken glasses took a gadget from inside the threadbare white lab coat he wore. Some kind of flashlight. “What’s goin' down? What is all this?”

And, for once, her mystery man gave her an answer.

Then he pointed the flashlight thingy at her, and she knew what was coming. For an instant, white light filled her vision. And an instant after that, Sharyn Jefferson, Co-Chief of the Undertakers, awoke on her cot in Haven, and remembered that Hot Dog was dead. 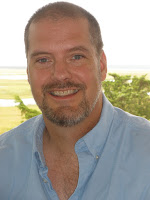 About Ty: Ty Drago does his writing just across the river from Philadelphia, where the Undertakers novels take place.  In addition to The Undertakers: Rise of the Corpses, The Undertakers: Queen of the Dead, and The Undertakers: Secret of the Corpse Eater, he is the author of The Franklin Affair and Phobos, as well as short stories and articles that have appeared in numerous publications, including Writer's Digest.  He currently lives in southern New Jersey with his wife and best friend, the real Helene Drago née Boettcher.

1 winner will receive an eBook of all 3 of Ty Drago’s Undertakers books.