Hollie Porter is the chairwoman of Generation Disillusioned: at twenty-five years old, she’s saddled with a job she hates, a boyfriend who’s all wrong for her, and a vexing inability to say no. She’s already near her breaking point, so when one caller too many kicks the bucket during Hollie’s 911 shift, she cashes in the Sweethearts’ Spa & Stay gift certificate from her dad and heads to Revelation Cove, British Columbia. One caveat: she’s going solo. Any sweethearts will have to be found on site.
Hollie hopes to find her beloved otters in the wilds of the Great White North, but instead she’s providing comic relief for staff and guests alike. Even Concierge Ryan, a former NHL star with bad knees and broken dreams, can’t stop her from stumbling from one (mis)adventure to another. Just when Hollie starts to think that a change of venue doesn’t mean a change in circumstances, the island works its charm and she starts to think she might have found the rejuvenation she so desperately desires. But then an uninvited guest crashes the party, forcing her to step out of the discomfort zone where she dwells and save the day … and maybe even herself in the process.
Book Links:
Goodreads: https://www.goodreads.com/book/show/18715347-must-love-otters
Amazon:http://www.amazon.com/Must-Love-Otters-Eliza-Gordon-ebook/dp/B00G2V5G32/ref=sr_1_1?ie=UTF8&qid=1384351684&sr=8-1&keywords=must+love+otters
B&N: http://www.barnesandnoble.com/w/must-love-otters-eliza-gordon/1117247811?ean=9781630640101

Eliza Gordon is a forgetful girl who relies on Post-It notes and cellphone alarms to get her through the day. An avid eater of cookies, she can be found with her hand in the jar when not in her cubicle. A purveyor of fictions, Eliza is confident that the life she lives in merely the imaginings of someone else's hand, poured from a dull pencil on cafe napkins, and that she is simply an understudy, waiting for her turn to take the stage. She has excellent taste in books, shoes, and friends, and questionable sanity in the realm of love. Best leave that one alone.
In real life, she's a husband-and-wife team of controlled chaos who writes stories to help you believe in the Happily Ever After. 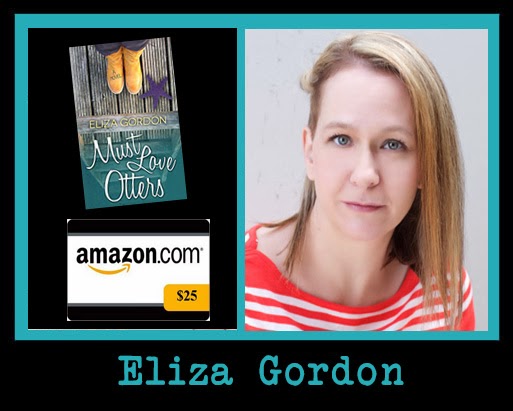