Sully has been struggling to find his place in the group while Nera and Bones fight to keep him safe from those that are hunting him as they did his forefather before him, the last Irish wolf. When they discover who it is, the race is on to allow him to change but protect him at all costs.
To complicate matters, a new family move in next door to Nera and she fears the worst. As they introduce them to the locals, Bones and Nera try to work out why they seem different.
In the meantime, Bones is invited for dinner and her mother falls under his charm and tries to match make, a situation Nera wants to avoid at all costs. With the battle to save Sully foremost in her mind, the constant niggling from her mother is the last thing she needs. 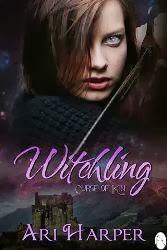 Nera is a normal teenage girl living in Ireland, or so she thought until she discovers the family secret.. now her world is forever changed.Descended from a long line of witches, she discovers she is the one who has to stop the curse that has taken the life of every girl before her.And if that isn't enough, she must learn to use magic from the man called Bones. He is the son of Mari, Queen of the Witches...and a god. It is Bones who has been entrusted to teach her the skills she needs to stay alive, which wouldn't be so bad if he didn't have an uncanny knack for pushing her buttons.Can Nera succeed and resist the charms of the man who gets under her skin at every opportunity?

Ari Harper never wanted to grow up.
To offset the limitations of aging ungracefully, she created her own set of unique worlds where she can be and do whatever she wants.
Gods, witches and demons surround Ari while she spins her magic, doing mainly what they tell her to do. Given a chance, she prefers to work amongst chaos, which is good because she is constantly surrounded by children, all clamoring for attention. Some of them end up in her stories, some of them even get to die grisly deaths or be cast away to another realm.

Can you tell us about your book, CHANGLING, in 10 words or less?

Changling is about Sully and his place in the group.

How long did it take you to write CHANGLING?

Not sure exactly because I wrote the first three books in this series together. I think all up it took me about six months non-stop frenetic writing.

We stay in Nera's POV through the whole series even though each book is centred around one main character and their 'place' in the circle of friends.

What was your favorite scene to write?

'Spoiler alert' When Sully has been wounded and has to change back. That took some work because it felt so personal for some reason. I really had to get into character for that one and you don't want to know the things I got up to and the looks from my family as I acted out parts.

If you could cast anyone to play some of the main characters, who would you choose?

I would rather go with unknowns and give the books a chance to stand alone.

Did any music inspire you while writing CHANGLING?

For sure. I always, always put P!NK on my earphones and blast it over and over again.

Will there be another book after CHANGLING? Can we expect a trilogy or are you anticipating taking it further than that?

Treason is the next book in the series and it tells Brie's story. I have to admit to bawling my eyes out in this book. It was gut wrenching to write some of those scenes. All up there are four books. Bones is the last book.

What is currently in your TBR pile?

I think it would be easier to say what isn't? I'm a compulsive book whore, excuse my language. I never stop buying even though I haven't read most of what I have on my kindle or from the pile of books next to my bed.
Chocolate or Vanilla? Chocolate

Cats or Dogs? Dogs I have three.

Once Upon a Time or Revenge? I haven't seen either, sorry I don't watch much tv.

Ebooks or Hardcopies? Both

Coke or Pepsi? I prefer a good cup of tea

Current Favorite Song? Anything of P!NK

Most anticipated 2014 book? The final Deborah Harkness' All Souls Trilogy

And now here's an Excerpt from Changling :

"I think you're a shape shifter, Sully." His face was calm when he said the words.
We looked at him, and I think we were all stunned by what he said.
"Shape shifter. Seriously?" Sully asked. "What kind, exactly?"
"Witches and sorcerers who willingly transform into animals and back to their original form," Bones said from the doorway in a deadpan voice.
I looked up at him, ignoring the way his lips curled into a small, secretive smile. His dark eyes met mine and he raised an eyebrow.
"Thank you, Bones. I couldn't have said it better myself," Jasper said.
Bones walked in and poured himself a cup of tea before coming over to sit at the table with us. We stared at him in disbelief. It was a change for me to be lost for words and I know he was enjoying it by the small smile making his lips twitch and the lights dance in his eyes.
"But you said witch or sorcerer," Sully said. "I'm neither."
"Actually, Sully, you are." Jasper looked at him with a grin spreading across his face.
"If that is the case, then how come he can't do anything?" I wasn't sure that I believed this.
"Same as it is with you, girl dear. You came into your craft when needs arose or when your body was in the right place with your mind. These things can't be rushed. We can try to educate Sully as we did with you, but if he isn't ready... well, it's up to him really." Jasper shrugged his shoulders.
"What makes you so sure that's what I am?" Sully asked nervously, locking his fingers together.
"Bones reminded me what skills my sons had. It stands to reason that they could have passed something onto you, even if it isn't as strong as it was for them," Jasper said. He watched the emotions rolling over Sully's face and smiled.
Bones watched also, but it was me not Sully that was in his sight and I could feel him in my head. My mind was racing, working, quickly sorting out the pros and cons of Sully being a shape shifter and what it could mean to us as a group.
Get out of my head. My gaze bore into his before he looked away, a red tinge creeping up his beautifully chiseled cheekbones.
"Jasper, tell us how this is going to work for Sully," I asked. "If he doesn't feel it yet, how much longer will he have to wait to change and when he does, how does he go about it?" I flicked my hair from my face and held out my hands toward him. "Like for example, what does he change into, and how does he change back, and—"
"Slow down, girl dear." Jasper laughed at me, holding up his hand, palm up. "One thing at a time."
"What I don't understand, Jasper," Brie whispered, her eyes shiny and wide, "is how the shape shifter, you know, does the shifting."
"Quite simple really, Brie. It's much like Nera and her ability to move things. She thinks it and it is. The same with shape shifting. Think it and it shall be. Well, that's the general idea anyway," Jasper said frowning at his own words.
"Do you mean that if I decide that I'd like to turn into a horse, I would just have to think of it and it would happen?" Sully looked back and forth between Jasper and Bones.
"Not quite," Bones replied, looking composed once again. "You need to find out what your animal is to start with and that could take a bit of work. Do you remember what Rogan's animal was, Jasper?"
"Yes, it was the wolf," Jasper replied, keeping his gaze on Sully.
"Does that mean that the wolf would be mine as well, or would I have a different one?"
"It would be fairly safe to say that you would follow in his footsteps and have the same animal as your ancestor," Bones replied.
From Jasper's son Rogan down through the ages to Sully. His skills had come to him from his mother, the Lady Leona, youngest sister of Mari, Queen of the Witches. It was a great surprise to find that Brie and Sully were related to Jasper, but to find that some of his son's skills could had come down to my friends was extraordinary to say the least.
When we were trying to find Sully's place in our circle, we hadn't thought that there would be a connection other than the bloodline. If we had taken more of an interest in the history of our ancestors, we might have had an idea earlier.

Now thanks to the author you have a chance to win either an eCopy of Witchling or Changling. Enter in the rafflecopter below :)