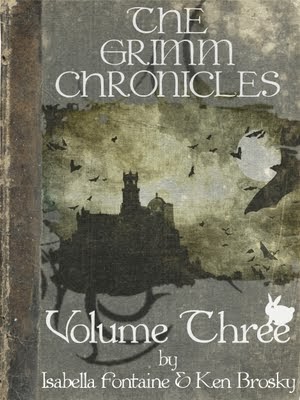 Europe: birthplace of Grimms' Fairy Tales. An unfamiliar land, brimming with its own breed of Corrupted who hide in the shadows, growing more evil with each passing day. For modern-day hero Alice Goodenough, this is more than enough to worry about. But she also has a fencing tournament to think about.

And a promise to keep with Sam Grayle, a Corrupted dwarf who schemes for more and more wealth. When their train breaks down in a small town in eastern Hungary, Alice finds the legacy of the hero is alive and well. Corrupted have visited this town before, and they aren't quite vanquished just yet. There's one left, hiding away, biding his time to enact a terrible price on his enemies. A little creature with big, big plans ...

200 years ago, the Brothers Grimm brought their stories to life.

But why? The question has haunted the heroes for two centuries, and no one has come close to the truth. Alice Goodenough will learn the terrible truth. And it will come at a terrible cost.

The fencing tournament is in just a few short days. Alice's team is hopelessly outmatched, facing off against fencers who have more experience and an inhuman amount of energy. But the other fencers also have a special drug, one that Alice's team can use to even the playing field. Whether they should take the drug or not threatens to tear the team apart.

Meanwhile, Alice must live up to her agreement with Sam Grayle, who lusts after a hidden treasure that once belonged to the Corrupted. Alice must team up with a group of explorers and delve deep into a forbidden cave that holds more secrets than any of them expected.

The Malevolence has been biding its time inside Castle Vontescue, but now Alice must finally confront it. The very same evil force that brought the Grimms' fairy tales to life now threatens the hero and all she holds dear. No one is safe in the darkness.

But what, exactly, is this centuries-old creature? To find that out, Br'er Rabbit will have to use all of his wits and decode a series of clues before time runs out. Meanwhile, Alice must keep her friends close and fight through her numerous injuries if she hopes to stop the evil.

But nothing is certain. Alice's body is breaking down. Her loved ones are in constant danger. There is no escape now ... soon, she must face off against the ancient evil that lurks within Castle Vontescue.

And there will be blood.

- The lost diary of Abigail Bauer
- An exclusive introduction

This is Isabella Fontaine's first Young Adult series. In addition to managing the family farm, she also enjoys providing design-related services for those who meet the qualification of "fashion nightmare."

We devised 3 "rules" for this Young Adult series. All three are important to us.

1. There are no love triangles. We've set this as an explicit rule. Our main character might find love, but she won't be hounded by topless boys and she certainly will never spend her time deciding who to spend the rest of her life with.

2. Our hero, Alice, must use her brain to overcome her obstacles. That doesn't mean she can't kick some butt (she definitely can!), but she does have to rely on her knowledge to win the day.

3. Alice will never commit an act of violence against another human being without there being consequences. Sure, she can do battle with evil monsters ... but violence against human beings has real consequences. Too often our heroes of today cause physical pain to people around them in order to achieve victory. Alice is different. Alice respects nonviolence to solve real-world problems, and only uses violence to rid the world of the evil Corrupted.

Jim Shepard – I always read him. I love his writing. The level of research he puts into each story is amazing. What does it mean to strive for something? How far will you go? Can you stop? Shepard puts us into these little worlds that are so detailed that you can feel yourself there. I’ll never stop singing his praises.
David Graeber – His book on debt is a must-read, providing a detailed history of how we look at the concept of “owing” people. A little nonfiction is good for you. It makes you think in a different way that fiction does, and you’ll never know what might pop up that you can use in a story. Charles Stross might agree here.
Neil Gaiman – Lots of stuff coming out from him this year, including his most recent book that reads really, really fast and has lots of great little bits of magic interwoven. But we should expect no less from him, right? I’m also thinking of getting the Annotated Sandman … I’ve heard mixed reviews about the level of content but I absolutely love getting behind-the-scenes looks at creative works.
Charles Stross – A little science fiction? Yes please! Stross writes complicated sci-fi, the kind of stuff you really need to dedicate yourself to in order to keep up. I like the challenge, mainly because Stross rewards the reader with rich stories and great characters interacting in futuristic worlds that let my imagination spin out of control.
Margaret Atwood – She finally finished her “speculative fiction” trilogy, and the last book didn’t disappoint. Sure, it could have used a little more Snowman (you’ll have to read it to understand, I suppose!) but overall it was a welcome and somewhat heartbreaking end to the series. I say “speculative fiction” but it could just as easily be called science fiction … the whole series is set in a very terrifying—but realistic—future where corporations control everything and spliced animals are common … and terrifying. I’ll be checking out something else of hers very soon.
Karen Russell – She has a short story collection that I’m dying to try out. She writes rich literary fiction, but sometimes she challenges the conventions of the genre by adding interesting things. Like vampires who suck on lemons. Her writing has always impressed me, although I had a hard time working through Swamplandia! for some reason. I think it had to do with the pacing, but sometimes the book gnaws on my brain and tempts me to dive back in. I might …
April Genevieve Tucholke – She’s written some really interesting stuff, but the one I want to check out is called Between the Devil and the Deep Blue Sea. Dark family secrets and a complicated family and some dark elements thrown in? AND a creepy guy with mind-controlling powers? I’m down.