The Night Realm by Annette Marie Book Blitz and Giveaway! 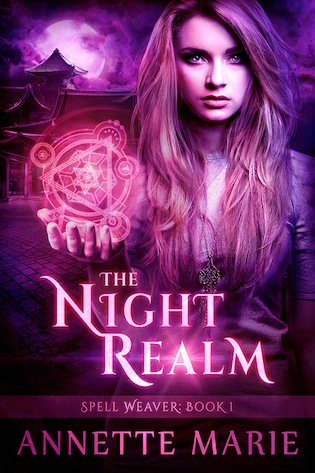 
Clio would love nothing more than to go home. But as the illegitimate daughter of the nymph king, she’s stuck in the human world, exiled until she can earn a place in the royal family. Then her half-bother offers her a chance to prove herself. All she has to do is acquire some magic … by stealing it from the most dangerous spell weavers in the Underworld.
Lyre prefers to go unnoticed, which is a tricky objective for an incubus. He can’t hide his looks or his coveted spell weaving skills, but he’s learned to mask his true intentions. As an unwilling pawn of the tyrannical Hades family, he stays alive by keeping one step ahead of his masters.
Now he’s been assigned to watch over a visitor from the Overworld—one who’s definitely hiding something. And with her unholy talent for triggering chaos and catastrophe, his job just keeps getting more perilous. Clearly, she’ll never survive this world.
The thing is, he’s no longer sure he can survive it either.

On sale at Amazon for 99c, release week only!!
—
EXCERPT:

As she stepped up to the last rack of shelves, she realized she hadn’t quite reached the end of the room. Tucked beyond the last shelf was another door—solid steel with no visible handle or lock. A web of magic crisscrossed the metal and complex runes filled four overlapping circles that shifted in a spiraling pattern.
She raised her fingers, keeping a safe several inches between her skin and the steel, and traced a glowing circle. That. She’d never seen anything quite like that before, but she knew it would react to touch. How it would react was another matter.
Intrigued, she leaned in closer, peering intently at the weaving’s underlayers as she tried to work out what it did.
“Don’t touch that.”
Lyre’s voice shattered the silence right behind her. A squeak of fright escaped her as she jerked backward from the door. But, with her sudden movement, her hand went the wrong way. And her fingers, already so close to the door, slapped against the metal.
She cringed in terror, fully expecting the door to explode or her bones to melt or her skull to burst open. Nothing happened—until she tried to pull her hand away.
It was stuck.
She yanked on her hand, but it was fused to the metal as though her skin had been superglued in place.
“I told you not to touch it.”
She shot a glare at Lyre, standing two paces away. “I wouldn’t have touched it if you hadn’t startled me!”
He tucked his binder under his arm and shoved his hands in his pockets. “Why would you touch anything in here without permission?”
“I told you—” She bit off the words. “Unkey the spell.”
“Hmm.” He rocked back on his heels and a downright evil little smirk curved his lips. “Not sure I know how.”
“What?”
“That lovely bit of work predates me. It’s pretty complicated. Since you fancy yourself a spell expert, if you look here, you’ll see—”
He started to point, and she had no idea why, but she flinched back as though he might hit her. Her elbow bumped the door—and got stuck too.
Lyre’s hand paused. “Now look what you did.”
“I didn’t—you—get me off this!”
“As I was saying, you can see here that the weaving amalgamates anything that touches it, so it’s embedded into your skin now—”
“Get me off this door!” She jerked helplessly, her immobilized wrist and elbow twisting awkwardly.
“Well, I could pull you off, but you might lose some skin. Though, since the weaving is spreading into your flesh the longer you stand there, you might leave more than skin behind.”
Her heart kicked up to a full gallop from her growing terror. He, however, seemed perfectly calm. Amused, in fact. Humor danced in his amber eyes, softening the color to something closer to buttery gold.
He was laughing at her.
“Oh.” His eyebrows rose. “That’s quite the scowl.”
She gritted her teeth. “Get. Me. Off.”
Those irresistible lips curved up and her stomach dropped to her feet. The air heated. Why was she suddenly kind of dizzy? Shadows slid through his eyes, dimming the amber to shimmering bronze.
“Get you off?” he repeated, and his tones were all purring honey, warm and deep and sensual. “With pleasure.”
A hot blush swooped through her cheeks as she realized what she’d said. “I—I didn’t mean—I was—”
In a panic, she lurched away from him—right into the spelled door.

Author Bio:
Annette Marie is the author of the Amazon best-selling Steel & Stone series, which includes Goodreads Choice Award nominee Yield the Night, and fantasy trilogy Red Winter. Her first love is fantasy, but fast- paced urban fantasy and tantalizing forbidden romances are her guilty pleasures. She lives in the frozen winter wasteland of Alberta, Canada (okay, it's not quite that bad) with her comparatively sensible husband and their furry minion of darkness—sorry, cat—Caesar. When not writing, she can be found elbow-deep in one art project or another while blissfully ignoring all adult responsibilities.