The Last Orphans by N.W. Harris Blog Tour and Giveaway! 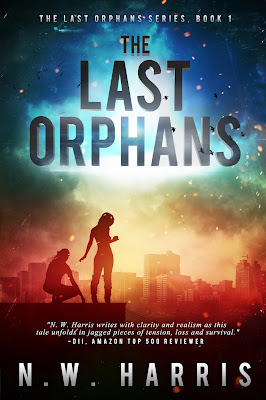 One horrifying day will change the life of sixteen-year-old Shane Tucker and every other kid in the world.

In a span of mere hours, the entire adult population is decimated, leaving their children behind to fend for themselves and deal with the horrific aftermath of the freak occurrence. As one of the newly made elders in his small town, Shane finds himself taking on the role of caretaker for a large group of juvenile survivors. One who just happens to be Kelly Douglas—an out-of-his-league classmate—who, on any other day, would have never given Shane a second glance.

Together, they begin their quest to find out why all of the adults were slaughtered. What they find is even more horrifying than anything they could have expected—the annihilation of the adults was only the beginning. Shane and his friends are not the unlucky survivors left to inherit this new, messed-up planet. No, they are its next victims. There is an unknown power out there, and it won’t stop until every person in the world is dead.

A spine-tingling adventure that will have you gasping for breath all the way until the last page, The Last Orphans is the first book in an all-new apocalyptic series.

Chapter ONE BREAK DOWN
Shane stared up at him, unsure how to proceed.
“I said get out, damn it,” Dad repeated, spittle flying from his mouth. “I won’t have a sixteen-year-old boy bawl’n like a little girl all the way home. Man up or walk.”
Too much wine had left Dad’s teeth and lips stained red, and Shane could smell the alcohol, even over the foul stench of Jackie’s cigarette. His aunt had whispered an apology to Shane at the funeral reception, saying she’d only put wine out because she didn’t think his dad would drink it. What she didn’t realize was Dad had become such a raging alcoholic that he would’ve drunk turpentine if it were on the table.
His father’s eyes widened, and his fists balled up. Shane thought he would grab him and try to drag him from the car.
“You know what?” Shane shouted. Gritting his teeth, he climbed out. He had grown a lot in the last two years; he wasn’t the little boy scared of the big man anymore. Speaking quieter, Shane put all the meanness he could into each word, “I hate your stupid car.”
Standing there with his arms crossed over his chest, Shane stared down at his father’s sunburned bald head. Dad pulled his oil-stained hand away from the door and straightened up in an obvious attempt to be taller. He huffed, his breath smelling like another DUI in the making.
Was he daring Shane to hit him? Why not? It might do him some good, Shane thought. And if he could knock him out, he’d be keeping him from driving drunk. It’d be a community service.
Dad leaned back. The whiskers of his thick, red-and-gray mustache pulled down on the sides and twitched. The muscles in his forearms, swollen from twenty years of work as a mechanic, rippled. His big, scarred knuckles protruded outward as his fists clenched tighter. Shane braced himself. He’d taken a thousand hits on the football field; he could handle one from this old man.
“Don’t come home ‘til you’re done blubber’n,” Dad growled with faltering bravado.
“I wasn’t planning on it,” Shane replied, slamming the door so hard the car’s decrepit suspension complained with loud, reverberating squeaks.
Dad hesitated and then pivoted away, stomping back around the front of the car. He hopped in and must’ve floored the accelerator, because the engine groaned for a moment, threatening to stall. With a noxious puff of black exhaust, it roared to life and spun the rear tires in the dusty gravel on the side of the road.


Make sure to stop Literary Meanderings, http://www.literaryme.net/ tomorrow for the next page in the chapter!

Born at the end of the Vietnam war and raised on a horse farm near small town north Georgia, N.W. Harris’s imagination evolved under the swaying pines surrounding his family’s log home. On summer days that were too hot, winter days that were too cold, and every night into the wee morning hours, he read books.
N.W. Harris published his first novel—Joshua’s Tree—in 2013. It was no wonder that with his wild imagination and passion for all things word related, that N.W. Harris was named a quarterfinalist in Amazon’s Break Through Novel Award Contest. In early 2014, N.W. Harris joined the ranks with Clean Teen Publishing when they signed his new young adult apocalyptic adventure series—The Last Orphans.
In addition to writing, N.W. Harris has been a submarine sailor, nurse, and business owner. His studies have included biology, anthropology, and medicine at UCSB and SUNY Buffalo. He is an active member of SCBWI and lives in sunny southern California with his beautiful wife and two perfect children. He writes like he reads, constantly.