Welcome to the Debut Author Bash!! Today I get to feature Debut Author Rachel Shane and her book Alice in Wonderland High. Check out her awesome interview and don't forget to enter the giveaway below!! 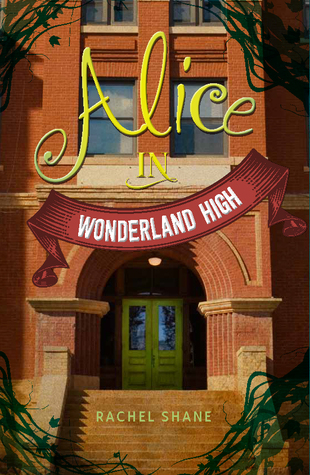 Sixteen-year-old Alice suppresses her need for rebellion after a petition to start a farmer’s market receives more snickers than signatures. That is until Whitney Lapin, a girl who speaks in cryptic riddles and spends her free time turning abandoned warehouses into beautiful gardens, leads her on a rabbit trail into the underground–aka secret society–of Wonderland High. Curiouser and curiouser. Even though Whitney’s group of teenage environmental vigilantes operates on the wrong side of the law, Alice has never felt more free to be herself. Soon she stomps on her good girl image by completing a series of environmental pranks to impress them: flooding the school and disguising a pig as a baby in order to smuggle it out of a testing facility. But the group refuses to help with the farmer’s market or reveal their hidden agenda. She wants to trust them, and she especially wants to trust (or maybe kiss) Chester Katz, a boy with a killer smile, a penchant for disappearing, and a secret that will really turn Alice‘s world backwards. When one group member tries to frame Alice for all the pranks, she must figure out their secret before she ends up in front of a jury that’s screaming, “Off with her head!”

Interview Questions
Where do your ideas come from?

I’d like to say something magical, like they come to me in dreams. But it’s more calculated than that. I keep an Evernote file with fragments of ideas. Sometimes it’s just a character (a teen who hacks into people’s memories) or a plot element (time going backward) or an X meets Y movie comp (Big Bang Theory meets Benjamin Buttons). And then when it’s time to write a new book, I’ll go through all my fragments and see if any can be combined. The three mentioned above ultimately led to writing the YA sci-fi that got me my agent.

How do you develop your writing ideas?

I have three methods:
Usually the character comes to me before the story. More specifically, the character’s voice. From there I need to figure out what the character wants and how that interacts with the plot. And what’s standing in her way of getting it. Characters usually grow organically for me.

When did you first realize you wanted to be a writer?
I’ve always wanted to be a writer. I wrote my first story orally when I was five, captured on video camera. It was about a girl named Mandie who could walk through lava, a very useful skill in volcano-less NJ. I wrote poetry and short stories through junior high and high school and wrote my first novel at 17, an existential mess without character names and plot, but damn it, I made it to 75k!

What makes you unique as a writer?
I like to think my books feature quirky scenarios, characters, or settings not usually told about. A family vacation on a cruise ship that goes horribly wrong. Extreme environmentalism. A girl who speaks only in riddles. A male Lady Gaga-esque singer who gets embroiled in a lip syncing scandal.

What writers inspire/d you?
Margaret Atwood and Chuck Palahniuk are the two writers who had the most influence on me wanting to be a writer. For YA, I’ve been inspired by Ally Carter and Maggie Steifvater.

How has your writing career changed since you started?
Since I’ve been traditionally published, I’ve also indie published several titles. I love being a hybrid author and find there are huge pros and cons to both routes. I plan to continue being hybrid.

What does your writing process look like?
I have a full time job in NYC and commute 2-3 days a week. I do most of my writing on my hour train commute each way. On days I work from home, I write after I drop the kiddo off at daycare but before I start work. I also write when she naps on weekends. I find I’m more productive with writing when I have a full time job because I don’t waste the time I have to write. When I used to be freelance, I’d squander all my free time.
As for my process, I am a big fan of outlining and I usually outline books for months before I start writing them until I have all the kinks ironed out. (I do this on the side of other projects.) I also zero draft each scene before i start by expanding the outline to include step by step details of what happens in the scene. After I first draft, I revise twice and then do a line edit pass, then I send to critique partners, incorporate their changes, send to my agent, incorporate his changes, do another read through, and it’s ready for submission!

I also outline revisions by plotting out every change in the Scrivener notes for each scene.

What would you say is your interesting writing quirk?
I write fast. Really fast. When I do 15 minute writing sprints with critique partners, I usually get about 750 words during the sprint. I can knock out a first draft in 2-3 weeks. I also type super fast.

What are your writing goals for the next year?
Next year I’d love to sell another book traditionally. I’m revising one now that should go on submission early 2016. I also plan to put out several indie titles including Book 3 in my Premature Evacuation series, a companion novel to Kasey Screws Up The World that tells the love interest’s side of the story, and another YA romantic mystery.

Name the five biggest distractions from your writing.
Sleep. Day job. Toddler. TV (I somehow watch pretty much everything that airs that isn’t procedural, crime, or medical). Secret FB groups.

What character would you most like to be stuck in an elevator with?
Veronica Mars, because she’d sleuth us out of there somehow.

Do you hear from your readers much? What kinds of things do they say?
I’ve received several thank yous for writing the book, which always makes my day!

What’s the best vacation you ever had?
Cliche answer alert but my honeymoon to Hawaii was pretty amazing. We had our own private beach for a few nights and stayed at a Bed and Breakfast that made the best meal I’ve ever eaten. Alternatively, I traveled to Italy with my parents and sister when I was in college and had the best meatballs there. Plus gelato. Hmmm, I guess I like food.

What’s your favourite rainy day movie?
Clueless or Bring it On.

If you could be any age again for a week, which would you choose and why?
I’d be 17 and it would be the week after I graduated but before my summer job started because it was the last time I was truly free.

If you could have personally witnessed one event in history, what would it be?
I would have loved to go to the opening performance of any Shakespeare play.

What's you favourite place to read?
I actually do all my reading with a book in my hand while walking in laps around my house to get in my 10k steps. Not that it’s my fave place to read. That would probably be a beach in Hawaii.

When you walk into a book store, where do you head first?
The YA section of course!

If you had a million dollars, what would be the first thing you would buy?


A house. And then some fabulous shoes.

Rachel Shane is a young adult author represented by Jim McCarthy at Dystel and Goderich. Her first book, ALICE IN WONDERLAND HIGH, which reimagines the classic story in a contemporary high school setting, debuts April 2015 from Merit Press.

When not writing, she works in digital publishing where she oversees the creation of ebooks, iPad apps, and other technologies for a major publisher in NYC. Prior to working in publishing, she was a computer animator where she designed the 2007 Superbowl graphics, a 3D Barbie movie, and a bazillion commercials. She lives in NJ with her husband and a future young adult named Quinn (who is named after the villain in ALICE IN WONDERLAND HIGH).

Print copy of ALICE IN WONDERLAND HIGH + Ebook copy of KASEY SCREWS UP THE WORLD. print copy is for US only.