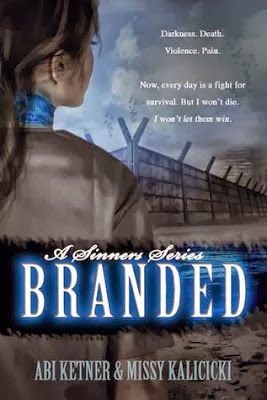 Fifty years ago the Commander came into power and murdered all who opposed him. In his warped mind, the seven deadly sins were the downfall of society. He created the Hole where sinners are branded according to their sins and might survive a few years. At best.
Now LUST wraps around my neck like blue fingers strangling me. I’ve been accused of a crime I didn’t commit and now the Hole is my new home.

Now every day is a fight for survival. But I won’t die. I won’t let them win.

The Hole can’t keep me. The Hole can’t break me.
I am more than my brand. I’m a fighter.
My name is Lexi Hamilton, and this is my story.

50 years ago a Commander came to power and created The Hole, a place to put all "sinners". He branded sinners with different colours on their necks.
Lust = Blue
Gluttony = Orange
Greed = Yellow
Sloth = Black
Wrath = Red
Envy = Green
Pride = Purple
Everyone heard what The Hole was like but surely it cant be that bad!! Well Lexi is about to find out.

This book just about blew me away!! I did the blitz for this on the blog and as an excerpt you could read Chapter One, well from then I was hooked. I jumped at the chance to be part of the blog tour.

It starts with us seeing Lexi contemplating suicide. She knows they will come for her and she doesn't think she will survive if they take her to the hell hole!! When it comes to the crunch though she cant go through with it. They take her and brand her with a Blue mark on her neck. She is wrongly accused of Lust, its a case of guilty till proven guilty!!

I liked Lexi. She was strong during her branding and tried to stay strong the whole time. She knows she is wrongly accused but also knows that nobody cares. The Hole tries to tear her to pieces but she fights the whole way through. The only thing that annoyed me about her was when Cole left for the week and she just about fell apart. I thought she could have been stronger, so much worse things happened and she kept it together so why fall apart then!!!

Im going to insert a *sigh* here because of Cole!! He was awesome. So strong and, in a place where the guards are often as bad as the inmates, he was nice. He treated Lexi as a person and not a brand. He was her protector and guard and couldn't help falling for her. I also adored his dog Zeus. The authors portrayed him as a bumbling lovably guard dog but he protected Lexi with everything!

The concept of this book hooked me too. Its basically like a concentration camp and if you are caught doing any of the Seven Deadly Sins then you were thrown into the camp. Its a hellish place, the people are starving, they live in squalor and if they cant contribute they get shunned to the very outskirts of the place. Everyone gets a job to do in the Hole. Most people branded as Blue are prostitutes but Lexi got lucky and got a job in the hospital.

This book is bleak, dark, disturbing, action packed and will leave you breathless! Its unique, sad, intense and everything you want in a dystopian book. Its a tale of brutality, torture, has horrors that you cant imagine but yet there's a sweet romance as well. The authors definitely don't shy away from the gory details!! I cant wait to read the next installment in this series.