Kaleidoscope Me by Hillary K Grigonis Blog Tour and Giveaway! 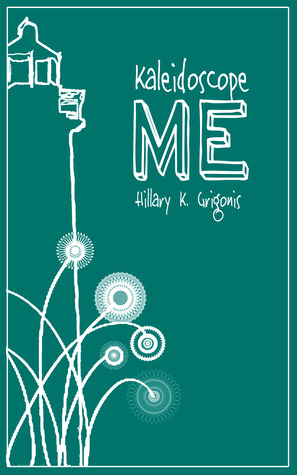 “Sometimes, my mind is a kaleidoscope. Somewhere, buried beneath a hundred different swirling colors, is the original image, but as you turn the dial, the original meshes with colors and becomes something completely different.”
Jadyn’s world twirls out of control after her mother dies in a car accident and her  forgetful Great-Aunt Nadine moves in. Her dad is never home and her best friend doesn’t even know  half of it. Jadyn is trying to keep it all together for her little brother, Trenton. But when Aunt Nadine disappears with Trenton in the middle of a snowstorm, Jadyn may be the only one who can find them. Kaleidoscope Me is an exciting novel about family, friendship and faith with a unique, non-linear style.

I didn’t think I would ever get used to walking in and seeing Aunt Nadine. In the kitchen, hunched up over dinner or cookies. In the den that was now her bedroom. In Mom’s chair at the dinner But slowly, she seemed to settle in like a drumbeat, tut tap, tut tap. That tingling feeling of something new slowly started to fade, tut tap, tut tap―and then she would do something to throw everything off again. Tut tut tut.She was making scrambled eggs and the scent of onions made my eyes water. I dropped my backpack on the floor and slid off my shoes. “What are you doing?”“Making breakfast,” she said, humming something with no consistent tone. I looked at the clock on the stove. “It’s three in the afternoon.”“Don’t be silly. I need to finish this so you can get to school.”
I slowly shuffled over to where she stood with the wooden spoon in a large frying pan. The pan seemed to be almost more onions than fluffy yellow eggs. I wanted to scream at her―tell her to quit playing games, that it really was three in the afternoon and that she already knew that no one in my family liked onions.“Aunt Nadine,” I said slowly. “Look at the clock. It’s 3 p.m. I just got home from school.”

She turned and started rummaging through the fridge. “I need to get something ready for dinner. He’ll be back any time now.”“He who? Who are you talking about?” Dad wasn’t due back home for another three hours―and lately he’d been staying at work until 8 or 9. I think work was easier for him than coming “Oh, don’t pretend you don’t know who I’m talking about. Help me get dinner ready. I was starting to make…” she looked at the pan on the stove and raised an eyebrow. “Eggs? Eggs! For the fried rice.”

She would need at least three boxes of rice in order to have more rice than eggs in whatever she thought she was making. She shut the fridge and began moving boxes around in the pantry, the sound of the eggs sizzling still filling the room. Her hand movements were slow, a little shaky, the sleeves of her blouse moving just slightly. The bright purples and reds on it made her skin look pale.“Oh dear,” she said, sifting through the bottom shelf. “We don’t even have rice. I need you to take me to the store.”She moved towards the door, still wearing her apron, and started putting her shoes on.“I’m only 14―I can’t drive.” I wasn’t even supposed to take drivers training until summer.
“Nonsense. You’ve been driving for over a year now.” That strange tingling sensation came
back―like walking into the high school for the first time―and I couldn’t help but think she thought I was someone else. But who? She opened the door out to the garage. “I’ll wait in the car.”“Aunt Nadine―I can’t drive!” She continued out the door.I let out a deep breath. Talking to her obviously wasn’t going to work. She was stuck in some alternate reality. I took the pan of eggs off the stove and slid them onto a hot pad, then flipped off the burner. Aunt Nadine was supposed to be the one making sure I didn’t burn down the house? Ha!
I bit my bottom lip and leaned against the counter, trying to think. What made Dad think that he could leave me and Trenton with her? When I found her a few months ago wandering in the median, I told myself that I might have done the same thing if I moved to a new house and started daydreaming while I was walking. But this was something different―there was something wrong. And Dad didn’t understand. Did she have to burn down the house before he realized something wasn’t right?

An idea slowly budded at the back of my mind and started to bloom. I thought of me and him, driving the lawn mower. The day he taught me how to drive it myself. The day last year―before Mom died―when he took me on the back road and let me drive. Just that one time. He wasn’t here to talk to. So I had to show him. Show him that something was wrong with Aunt Nadine. More than just  forgetting how to do the laundry or leaving me behind at a restaurant.
I found Aunt Nadine’s keys in their hiding spot―the desk drawer in Dad’s office. Dad was
always obvious about where he hid things; me, I’d forgot where I hid some things. I rushed into the garage before I could change my mind. Aunt Nadine was sitting in the passenger seat of her old car. One of those longer cars with wood on the side. She wasn’t supposed to drive anymore, but when we inherited her, we inherited her car. Mom’s was totaled in the wreck. And even if it hadn’t been, I don’t think I would have been able to walk beyond the garage door with the car just staring at me.
My hands shook as I pulled open the driver’s side door. I slid in quickly, shutting the door
behind me. I sat with my hands frozen on the leather steering wheel. In my mind, I watched my mom starting up the car, putting it in reverse, and backing out―over and over again, in fast forward. No problem, right?I tried to hide my nervousness, but it escaped with a sigh.“Aren’t you going to put your seatbelt on, dear?” Aunt Nadine said, her face still pale. In the dim light, I noticed her eyes were distant, watery.
“I was just going to do that,” I said, trying to sound confident. I pulled the belt over my shoulder and buckled it in with a loud click. The keys slid almost too easily into the ignition and the car roared to life―although maybe roar is not the right word. It sounded more like a go-kart. I tried to tell myself that’s all it was, a go-kart on a circle track where nothing can really go wrong.I couldn't reach the pedals. I fiddled with the lever before the seat released and I scooted up. My seatbelt felt too tight then, but I didn't change it, feeling a little more secure with the rough edge digging into my skin.I checked my lights, the mirrors. Taking a deep breath to steady my hands, I pressed on the brake and pulled it into reverse. And slowly released the brake.
I think I moved about a foot before I pressed the brake back down to the floor. I stared in my
rearview mirror, frozen for a split second, then pulled the shifter back to park and turned the car off.“You know,” Aunt Nadine said slowly, in that voice that cartoon characters have when there’s a light bulb over their head. “We could just order Chinese. That place over on Main Street delivers.”I realized I had been holding my breath and exhaled loudly. “That’s a good idea. Go on inside and call it in. I’ll be just a minute.”
She slipped her seatbelt off, opened the door and walked back into the house, kind of penguin-
I looked back up in the rearview mirror. The garage door was closed, probably a few inches
from having a rather large hole in it. I stared at the garage door opener, built into the wall of the garage right by the door. The first thing I should have done.I slowly lowered my forehead to the steering wheel and let my tears fall on its hard, tan surface, swirling and twisting like a kaleidoscope with no color. 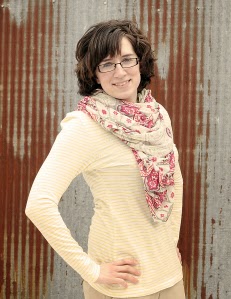 When she isn’t writing, Hillary K. Grigonis can usually be found with a camera in hand. She lives in Mid-Michigan with her husband and young son. After starting to write fiction as a teenager, she’s always been interested in creating stories for young adults. She started writing Kaleidoscope Me while attending Saginaw Valley State University.  A writer at heart, she also contributes to several websites on a regular basis, including serving as the editor of DigitalCamera-HQ.com. Kaleidoscope Me is her first novel.
Facebook: https://www.facebook.com/hillarykgrigonis
Website: http://hillarykgrigonis.com/