The Rising King by Shea Berkley Blog Tour and Giveaway! 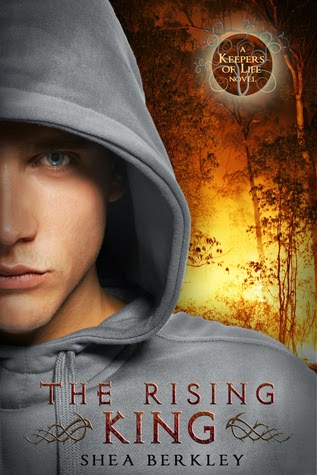 The summer before Dylan Kennedy’s senior year in high school is turning out to be anything but boring. Ridiculously hot girlfriend? Check. Killing evil Dark Souls who suddenly have aspirations of taking over the magical realm of Teag because its protective spell is gone? Check. Not even Teag’s King, Dylan’s father, Baun, can stop them. People are dying, and a dark magic that his girlfriend, Kera, received from Baun is growing stronger. Dylan wants to believe Kera is suppressing the darkness that’s in her, but every day he sees that control slip just a little more.
Baun sends Dylan to find a powerful magic that stop the Dark Souls, a magic so strong that Baun hid it so no one else could use it. When Dylan doesn’t expect to find along with it, are consequences that could end the lives of those closest to him.

Character: Lucinda
Age: Age doesn’t apply to her. She’s special like that.
Birthplace: The untamed land west of  Teag
Ability: No one knows the extent of her powers or where they came from, yet everyone secretly wishes they had them.

What makes Lucinda unique?
She’s a shape shifter that has far too much magic
Likes
Leo. Even she was surprised to find out her feelings for the human were stronger than she thought.
Chaos. Wherever she is, chaos follows, and she loves it.
A good pet. Whether in human or cat form, she loves a good scratch and tickle.

Dislikes
Everyone (except Leo). She only tolerates people because she enjoys seeing them fall into trouble, which she usually causes.
Pux. She’d rather eat one than associate with one. But then, everyone kind of feels that way about the pux.

Shea Berkley has a fondness for characters, whether in real life or those she makes up in her head while tending to the multitude of mundane tasks she's forced to do in order to survive. Writing gives her purpose (okay it keeps her out of trouble...mostly), and she can't imagine herself doing anything else. (well maybe a zombie for the Walking Dead, but who doesn't want to do that?). Since she leans toward the pubescent, she fits right in with the Young Adult book crowd. To find out more about her, go to www.sheaberkley.com or Facebook.