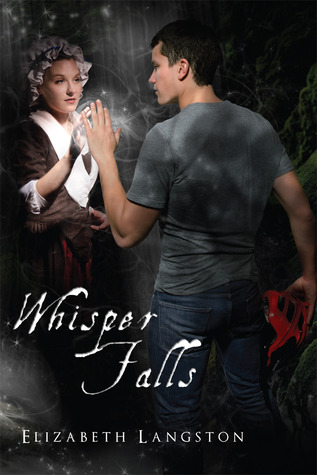 While training for a mountain bike race, high-school senior Mark Lewis spots a mysterious girl dressed in odd clothing, standing behind a waterfall in the woods near his North Carolina home. When she comments on the strange machine that he rides, he suspects something isn’t right. When Susanna claims to be an indentured servant from 1796, he wonders if she's crazy. Yet he feels compelled to find out more.Mark enters a ‘long-distance’ relationship with Susanna through the shimmering--and temperamental--barrier of Whisper Falls. Curious about her world, Mark combs through history to learn about the brutal life she's trapped in. But knowledge can be dangerous. Soon he must choose between the risk of changing history or dooming the girl he can't stop thinking about to a lifetime of misery.

I was looking forward to delving into Whisper Falls by Elizabeth Langston after reading the blurb when I participated in the cover reveal. The idea of two eras coinciding intrigued me, having steered clear of any of these kinds of book/shows/films before, and I was looking forward to seeing how the author handled the difference in knowledge between the main characters.

Speaking of which, we follow the two sides of the story from the POVs of Mark and Susannah. Both of them were likable characters. Both of them easy to connect with and relate to, and begin to care about the relationship between them. However, Susannah gave us a whole lot more to care about and intrigue us with than Mark did, and she/her plight was definitely the driving force of this story. Her circumstances, the life she faces, are heartbreaking and provide great focus for the reader—a focus that eventually bleeds over into Mark’s side of the story also, as he decides to make ‘saving’ Susannah his mission. Sadly, aside from his connection to this times-apart female, and his small ventures into ‘her time’, Mark doesn’t really have a whole lot of story to tell, and this is certainly where the pacing of the book began to fail a little. I mean, we have the addition of his sister ‘issues’ that his family seems to revolve around, but I couldn’t help but feel as those this was added merely to give his POVs ‘something’ more than because it contributed to the story, because the other ‘sister’ angle AND his best friend pairing up with Mark’s ex even could have been dismissed without hurting the story. And I think these additions not really interesting me very much were a big contributor to the dragging pace patches. In fact, the story went from quickly grabbing the reader interest to pretty slow, and only finally began to relocate its momentum on its final furlong toward the finish line. This is truly when I began to fully enjoy this story, and this is when I became 100% engaged and urging them toward their happy ending, whatever that might happen to be. And the happy ending was fulfilling. Not slammed closed too soon, and not dragged out for too long either. It definitely left me feeling somewhat satisfied.

So other than the dull pacing for a big section of the middle of the book, and Mark’s overuse of the word ‘dorky’ to describe Susannah rather than showing her to us (which actually resulted in me forgetting for most of the story what either of them looked like), and the rather large issue I had with Mark’s research (he spent a LOT of the book researching Susannah’s ‘world’/background, but didn’t ONCE research the potential of ‘portals’ in Whisper Falls, which would be the FIRST thing I’d have Googled if this happened to me—so I consider this a plot hole)—yeah, other than those, I enjoyed this clashing of ‘times’, and felt content with the ending and happy enough to read on just as soon as I have time.