Taken by a Dragon by Felicity Heaton Blog Barrage!

Taken by a Dragon, the seventh book in New York Times best-seller Felicity Heaton’s hot paranormal romance series, Eternal Mates, is now available in ebook and paperback. To celebrate the release, she’s holding a FANTASTIC GIVEAWAY at her website and sharing sneak peeks of the book. 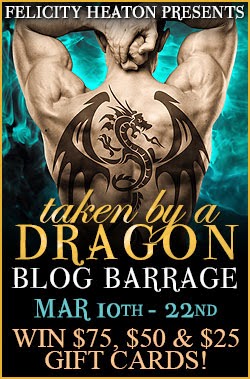 Find out how to enter the Taken by a Dragon international giveaway (ends March 22nd) and be in with a shot of winning a $75, $50 or $25 gift certificate at her website, where you can also download a 5 chapter sample of the novel: http://www.felicityheaton.co.uk/taken-by-a-dragon-paranormal-romance-novel.php

Here’s more about Taken by a Dragon, including an excerpt from this paranormal romance novel. 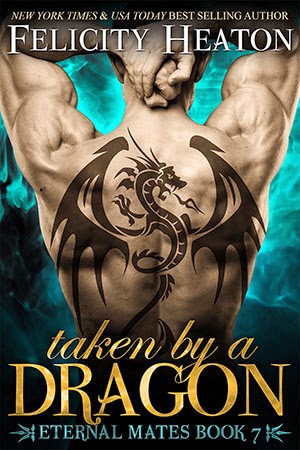 Possessed by a need to save a beautiful Amazon warrior from the vision he witnessed, Loke snatched her from the midst of the battle between the Third and Fifth realm of the demons, and carried her to his home deep in the black mountains of Hell to protect her. But as the fierce little female awakens, he finds she’s anything but grateful, and his dragon instincts roar to life to warn she might be more to him than an enemy—she might be his fated female.
Anais remembers meeting a handsome warrior in the heat of battle, a man who was her enemy but who looked at her with eyes that held dark heat and wicked promises. When she wakes to find that same dragon shifter has taken her captive, desire is the last thing on her mind, but escaping him to return to Archangel, the hunter organisation she works for, sounds less than appealing when he reveals the reason he took her—to stop her from dying.
Can Loke protect Anais from the dangers of his realm and how far will he go to save her from the future he keeps witnessing? Can Anais resist the fierce attraction that burns between them as hot as fire and stay true to Archangel or will her heart be taken by the dragon?

Taken by a Dragon is available from Amazon Kindle, Kobo Books, Barnes and Noble Nook, Apple iBooks stores and other retailers. Also available in paperback. Find the links to your preferred retailer at: http://www.felicityheaton.co.uk/taken-by-a-dragon-paranormal-romance-novel.php

Taken by a Dragon is available from Amazon Kindle, Kobo Books, Barnes and Noble Nook, Apple iBooks stores and other retailers. Also available in paperback.
Find all the links, a fantastic 6 chapter downloadable sample of the book, and also how to enter the giveaway and be in with a shot of winning a $75, $50 or $25 gift certificate at her website: http://www.felicityheaton.co.uk/taken-by-a-dragon-paranormal-romance-novel.php
Books in the Eternal Mates paranormal romance series: