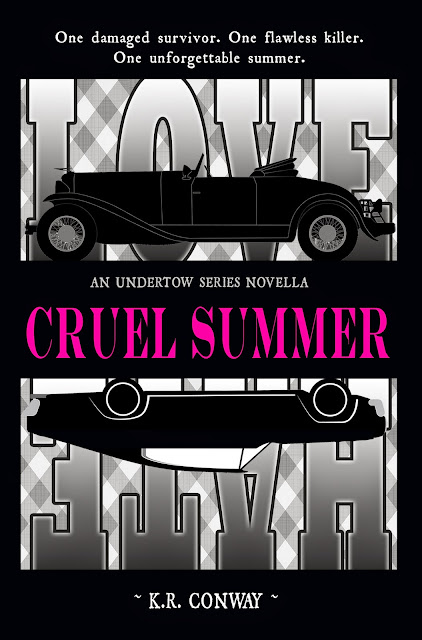 Summary from Goodreads:
Kian O’Reilly is flawless as a killer.
Well-practiced in the art of making murder look like an accident, he is selfish, wealthy, and totally arrogant as a soul-stealing immortal. But when he ends up stranded on Cape Cod with a stolen car and a dead drug dealer in the trunk, he thinks his luck couldn’t get any worse.That is, until Ana Lane shows up.
Gifted as a mechanic and surfer, feisty Ana is not a fan of the entitled Frat Boys who show up every summer, messing with local girls. Believing Kian is one of those typical rich brats, she fixes his car and ruthlessly dismantles his cocky ego . . . which intrigues the dangerous soul thief.
Determined to spend more time with the prickly mechanic, Kian sets out to understand what makes Ana so fierce. Soon, however, he uncovers the painful truth behind the real Ana Lane, and the decision to save her, may destroy them both.

** This is the prequel novella to UNDERTOW and is based on the story of Kian and Ana the summer they met. While it can be read at anytime in the series, it is meant to be read after UNDERTOW and STORMFRONT.**

I slowed as I approached the door to the busy shop, calming my roaring imagination, but then I heard Pix’s voice. It was coming from the backside of the building, and I slowly eased my way along the weathered shingles, listening. She was engaged in a heated discussion out behind one of the freezers with Apron Boy, both semi-hiding at the rear of the building. “He’s gonna have setbacks!” she snapped in a low tone. “He was good for almost a full three weeks! He’ll get back on track. I know he will! And this was my fault. I got in his way.” The anger in MJ’s response was damn near palpable. “THIS is not EVER your fault. Damn it! Don’t do this to yourself again. Don’t get your hopes up and let your guard down. You have a plan, Ana. Stick to it. And don’t, DON’T, be home when he is.” “He can’t be helped if I’m not keeping an eye on him when he’s home. He wants to get better. He just needs me there, keeping him focused.” “HE DOES NOT WANT TO BE SAVED! It’s not your job to fix him!” yelled MJ, whose sharp tone made me unwilling to lurk any longer. I stepped around the side of the building and Ana saw me out of the corner of her eye, quickly turning away. “Go away, Kian!” she demanded, startled. “What’s going on?” I asked carefully, looking between Ana’s turned back and MJ, who was rubbing his face in frustration. “Make him leave, MJ. Please,” she whispered, but MJ just shook his head. Good grief, had I done something wrong? MJ, who was still not a fan of mine, looked at me with a hardened gaze. “I can’t hide this much longer and she won’t listen to me. And while I don’t like you, I’m hoping she will listen to you.” He turned back to Ana, who still refused to look at me. “Ana, this can’t continue and somewhere deep down, you know I’m right. Maybe Kian can make you see reason, because the mirror obviously can’t.” I watched as he walked away, leaving the two of us alone at the back of the shop. I stepped over to where Pix stood, her back to me and her hair shielding her face. “What’s going on?” I asked carefully. “I’m fine. I can handle it. MJ is just freaking out, as usual. It’ll all be fine.” She reached out and picked at the peeling paint on one of the cedar shingles and it floated to the ground, planting itself among a bunch of flowering weeds. Rather than ask her to turn to me, I stepped around in front of her and she tensed, trying to hide her face again, but this time I saw it – the remnants of true violence. Rage lit to life in my chest as I sucked in a sharp curse. “Who did this to you?” I asked, barely maintaining my sanity. A dozen ways in which to murder an asshole ran through my head at warp speed. I liked them all. Ana gave up on hiding and turned toward me, fully displaying a bruised cheek and swollen lip. Someone had dared to turn their anger on her and left a reminder of their selfishness on her fair skin. Whoever it was, had one day left to their miserable life, I’d make sure of it. Ana crossed her arms and looked at me, determination in her eyes. “It was an accident and it’s not that big of a deal.” “Like HELL it’s not a big deal.” I snapped, causing her to startle. I needed to calm down. The last thing she needed was for me to turn into a fuming maniac in front of her. I tried again, controlling my need to put my fist through the wall. “Pix – it’s a big deal. People don’t accidentally hit other people in the face. Who did this to you?” So I can rip his arms off and beat him senseless with his own hands.

Links for Undertow (Book One):
Goodreads│Amazon

About the AuthorI have been a journalist for 15 years and serve on the Board of Directors for the Cape Cod Writers Center. I also drive a 16-ton school bus because I am ENTIRELY NUTS.In addition to working jobs that should come with a warning label , I hold a BA in Psychos (Forensic Psych), torment the tourists about Jaws, and occasionally jump from the Town Neck bridge in an attempt to reclaim my youth.I live on Cape Cod with two smallish humans who apparently are my kids, my fishing-obsessed husband, two canines (adept at both flatulence and snoring), and a cage-defiant lovebird that sleeps in a miniature tent. Nope - that's not a type-o. The bird is quite the indoor camper.