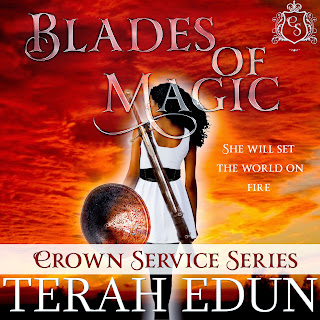 It is not a peaceful time in the Algardis Empire. War is raging between the mages and seventeen-year-old Sara Fairchild will be right in the middle of it.
She just doesn't know it yet.
Sara is the daughter of a disgraced imperial commander, executed for desertion. Sara is also the best duelist and hand-to-hand combatant in Sandrin. She lives quietly with her family’s shame but when challenged about her family’s honor, her opponent inevitably loses.
On the night she finds out her father’s true last actions, she takes the Mercenary Guilds’ vows to serve in the emperor’s army. Using her quick wits and fierce fighting skills, she earns a spot in the first division.
There she discovers secrets the mages on both sides would prefer stay hidden. Dark enemies hunt her and soon it's not just Sara questioning the motivation behind this war.
While fighting mages, blackmailing merchants and discovering new friends, Sara comes across something she’s never had before - passion. The question is - can she fight for her empress against a mage who might unwittingly claim her heart?
This is year one of the Initiate Wars. Sara is hoping it doesn't become the year she dies.

This is my first Terah Edun book but it definitely won't be my last. I thoroughly enjoyed it. You are brought into the story right from the start and its pretty much a non stop, action packed, roller coaster.

I loved the MC Sara. She was totally kick ass. Despite what everyone thinks about her father, she knows that deep down if he did desert then he had a really good reason to. I admired her faith in him and her tenacity to prove him innocent.

I also love Saras' powers. The idea of her powers, if used constantly, could possibly make her become a beserker was unique and quite awesome! Not only does she battle the people who want to harm her everyday, she also battles her powers and fears.

Ezekiel was awesome too!! He was witty, kind, clever and an all round great person to know. I loved seeing both of them together and seeing their friendship blossom.

The plot was really fast paced and gripping. Poor Sara is put through the paces the whole way through. She is first hired as a watcher (a security guard for magical items). During this time she is forced to guard certain items multiple times, then she learns that her dad may be innocent and ends up as a mercenary to try to get information, then she is sent to a battlefield!! It was so fast paced but also well thought out and developed.

In all I really enjoyed this and will definitely keep on with the series. There are plenty of answers still to come!!

The audio of this was fantastic. The narrator nailed Saras' spunkieness perfectly. She gave each character their own "voice" so it was really easy to differentiate each one.

Terah Edun is a young adult fantasy writer that writes the stories that she always loved to read as a young girl. She prefers reading and writing high fantasy tales of adventure, magic, fellowship and courtship. Her latest book is Sworn To Conflict, the third in the Courtlight series.