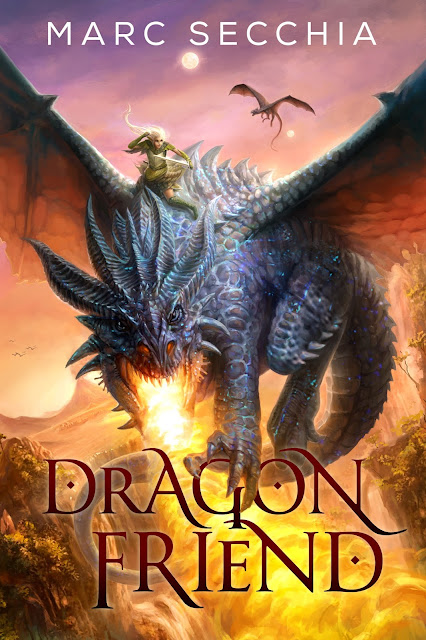 Stabbed. Burned by a dragon. Abandoned for the windrocs to pick over. The traitor Ra’aba tried to silence Hualiama forever. But he reckoned without the strength of a dragonet’s paw, and the courage of a girl who refused to die. Only an extraordinary friendship will save Hualiama’s beloved kingdom of Fra’anior and restore the King to the Onyx Throne. Flicker, the valiant dragonet. Hualiama, a foundling, adopted into the royal family. The power of a friendship which paid the ultimate price. This is the tale of Hualiama Dragonfriend, and a love which became legend. *Series Note*Dragonfriend is a stand-alone YA fantasy novel which is set in the same world as the bestselling dragon adventure series Shapeshifter Dragons and Shapeshifter Dragon Legends. It can be read in any order alongside Aranya, Shadow Dragon and The Pygmy Dragon.

When he woke, a volcanic twilight enflamed his world in auburn and gold hues. Flicker began to stretch before stopping with a grimace. Unholy monkey droppings, what a bad idea. He eased his wings. No more flying for him, not for several days, he suspected. Oh ... the creature lay right next to him, face-up to the blushing skies, breathing shallowly. It had a green cloth covering on its body, and a large patch of crimson stained its stomach area. Was that its blood? He flinched. Grotesque! Not even a hint of gold, unlike the blood of Dragons. Wake up, weird creature, he chirped. It did not move. Flicker stretched out a paw curiously, hesitated, and then pricked its limb with his talon. How daringwas he? The creature’s skin was so supple, it yielded immediately to his touch. More red welled up. He winced. What was the matter with its hide? It didn’t have hide? Now, what word had the scrolls
used? Skin, yes. He rolled the unfamiliar word across his forked tongue. They had skin, not Dragon hide, a covering so smooth and colourless it reminded him of a newborn, blind rodent. His stomach-fires soughed uneasily. Its limbs were long but supported no wing struts or elastic membranes. How could it have hoped to fly? Instinctively, his tongue flicked out to taste the creature’s blood, finding it rich and metallic, full of enigmatic undertones. Without warning, a vision struck him. A big creature beat this smaller one with a flat piece of metal. They exchanged meaningless sounds. The little one attacked, but it was not as powerful a beast as the one with the fungal growth on its face. The big one stuck a shard of metal into this one’s stomach. Flicker’s throat swelled. Murder? A fight to the death? Was this creature a female of their kind, rather than a handsome male like him? By the fires of the Ancient Dragons, she had to be the ugliest female of a species he had ever encountered! Flicker shifted closer to examine her face, fascinated and repelled in equal measure. When she sighed and shifted, he shrank back, all three hearts tripping along, but then she made a purring sound like a sleeping dragonet. Well! What a foolish idea, sleeping outdoors at night. Perhaps she was as stupid as she was ugly? Just look at her flat, squashed muzzle, and her tiny nose. How could she scent food with that thing? Strange blades of grass sprouted from her head, grass as pale and golden as the wisps that grew lower down the cliffs, near the caldera, bleached by the heat and gases. Her paws had talons, but they were weak and clearly impractical for rending her prey. The dragonet cocked his head to one side, his eyes roiling with Dragon fire. Well, you’re not dead, he said, speaking Dragonish telepathically. Say, ‘thank you for rescuing me, Flicker.’ She snored. He tried speaking aloud. I do declare, you’re the bravest, most beautiful dragonet in this entire Island-Cluster, Flicker. I am eternally in your debt. Drool slipped from the corner of her mouth; saliva laced with more of her freakish blood.

Marc is the bestselling author of 12 fantasy novels. Aranya and The Pygmy Dragon are full of dragons, battles and romance, and are set in a unique island-world above the toxic cloudlands. He's also the author of a bestselling African historical fantasy series set in ancient Ethiopia.Current projects: Dragonlove, the sequel to Dragonfriend, and the sequel to The Pygmy Dragon are being drafted. Marc was born Cape Town but now lives and works in Ethiopia with his wife and 4 children, 2 dogs, and a variable number of marabou storks that roost on the acacia trees out back. On a good night there are also hyenas prowling along the back fence. When he’s not writing about Africa or dreaming about dragons flying across the moon, Marc can be found travelling to remote locations. He thinks there’s nothing better than standing on a mountaintop wondering what lies over the next horizon.