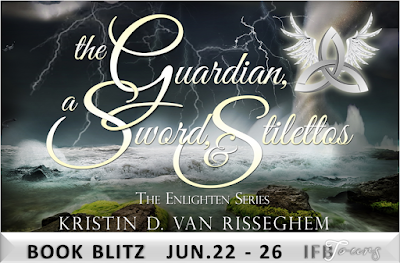 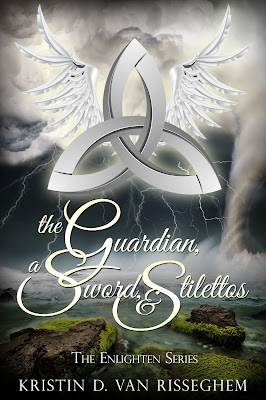 Zoe Jabril could be just another 17-year-old girl attending parties with her friends and checking out cute guys—except her best friend is a Guardian Angel, and the boy she crushes on is a Nephilim, half-angel, both sent to Earth to protect her. A high school classmate happens to be a trendsetting shopaholic fairy. And now there’s a new werewolf in town.

Zoe has to deal with her feelings toward Shay, who spreads a strange electrical current through her body every time he touches her. Now Zoe is under constant attack from demons, trying to kill and stop her from fulfilling the Prophecy: a girl will be born who will unite the Enlightens to battle evil. Then on top of that, between boring homework and drama with girls at school, she has to control new found talents if she’s to prevent the devil from escaping Hell.

In order to do so, Zoe must devise a kick-ass plan ASAP or watch everyone die, because she’s running out of time. She turns eighteen in two months—the date Armageddon kicks off.

I stumbled into Kieran as a tremor moved through me, the hairs on my arms stood at attention like tiny lightning rods.
“Do you feel that?” my voice sounded breathless, even to me.
He glanced sideways. “Feel what?”
“Look.” I held out my arms to him, “I feel strange. Like someone…” I rubbed my slightly numb hands over my forearms and sucked in a breath, as he hooked his head around. I fell into step beside him. “Never mind. It’s probably nothing.”
This happens when lightning’s about to strike, right?
The heat from the sun radiated off the few cars parked along Boutique Row, their owners engaged in mid-afternoon shopping. Store fronts displayed the new and trendy ‘must-have’ dresses, shorts, and shoes for the spring season.
I paused to see my reflection. Not a hair was out of place. Thank God.The Coffee Grind’s signature cinnamon dessert scent wafted through the air, and my teeth hurt with the memory of sinking them into it time and again. What I wouldn’t give to be able to park my back end on one of their leather wing-back chairs and crack open a book, while the fire crackled next to me in the original stone hearth.
“Earth to Zoe,” Kieran’s gentle voice broke my trance. He poked my shoulder. “Are you going to order or what?”
My face flamed. “You could’ve ordered for me.” I rummaged through my purple backpack. “You know I get the same thing every time.”
Kieran watched me rub my arms, as he told the cashier, “She’ll also have an ice water.” He tilted his head toward the menu board. “Anything else?”
“Did you order me a chai?” I asked. He nodded. “Cause you know I can’t function without a good cup of—”
“You can’t function with it, either.”
Then I turned my attention toward the clerk, unsure if I recognized him or not. I hope he doesn’t know me. “Nothing else. Thanks.” I handed him some bills.
“How’s track going, Zoe?” the clerk asked.
Damn.
“Think you’ll make it to State?”
I realized he was a sophomore on the team. Our paths crossed during several meets. He looked thin in his black polo shirt, and I knew a mirror would reflect a similar physique in me, though my lavender sundress tried to disguise it.
I shrugged. “I have fast times, but we’ll see. If I don’t make it this year, there’s always senior year.” My fingertips skimmed the glass display of mammoth muffins and assorted pastries as we moved down the aisle to the ‘Pick-up Here’ sign. A heavy coffee aroma hung in the air.
A figure in dark clothing with yellow-tipped, spiked hair stared at me from outside the glass entrance door. His eyes narrowed on contact with mine. Chills rushed through my body. 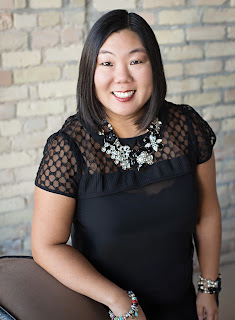 Kristin D. Van Risseghem grew up in a small river town in Minnesota with her parents and older sister. And after receiving a double Bachelor of Science degree from Winona State University in Paralegal and Corrections, she worked as a Paralegal for various law firms around the Twin Cities for 14 years. Then she left the legal field and is now a Senior Buyer for a technology company.

Currently, Kristin lives in Eagan with her husband and two Calico cats. She also loves attending book clubs, going shopping, and hanging out with friends. She has come to realize that she absolutely has an addiction to purses and shoes. They are her weakness and probably has way too many of both.

In the summer months, Kristin can usually be found lounging on her boat, drinking an ice cold something. Being an avid reader of YA and Women's Literature stories, she still finds time to read a ton of books in-between writing. And in the winter months, her main goal is to stay warm from the Minnesota cold!