Guys Im so pleased to say that Julie from Bookaroo-Ju is joining me here on Book Lovers Life as a Guest Reviewer! She is closing her blog for a little while and has agreed to let me post her reviews here. Below is her first review for Book Lovers Life so please welcome her! 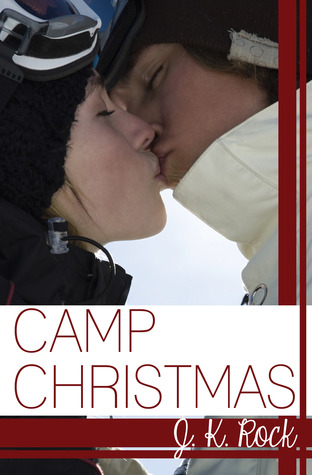 Hannah never meant to be a mean girl – at Camp Juniper Point or at her high school. It just sort of happened during one painful year when her parents split and her life fell apart. Who knew being mad at the world would catapult her to popularity? But since changing the status quo would make her some serious enemies, she’s prepared to ride out her time until graduation. That is, until a camp friend calls her on the act during their school ski trip. Will Julian out her to her friends? Or will the guy she once accused of being King of the Nerds make her wish she was a whole lot more like him?

I’d been looking forward to Camp Christmas by J.K. Rock for two reasons. One: because I’d had a taste of this dynamic duos writing before and trusted them to entertain. And two: because nothing quite beats Christmas reading like a Christmas themed story with snowy setting at Christmas.
Admittedly, this one didn’t feel quite as alluring as Camp Kiss and Camp Boyfriend, the prequel and first book in the series. I’m not quite sure if it’s because we switched to new MC’s and so had to start afresh with caring about new characters, or because this one didn’t seem to hold *quite* as much attention to detail as I’m used to from J.K. Rock, which almost made it feel as though we don’t get so much for our wordage in this one. However, regardless of this, or the reasons, I *did* enjoy this short novella.
Hannah took a little while to like, I’m afraid. Even though we’re given a hint that she doesn’t like how she or her friends behave, she still does it, and grasping a connection with a character who’s acting like a complete cow isn’t easy.
Luckily, this story has an ace up its sleeve, in the form of ‘King of Nerd’ Julian. From the off, we’re given a reason to like this dude. He’s friendly. He’s willing to see the best in people. He’s unselfish. He’s unafraid to be himself. And he’s (hats off to him) persistent.
Sure, I might’ve spent some of the novella hoping that Hannah doesn’t grow some balls and give him the time of day just to give him a reality call, as well as a narrow escape. However, the more we read on, the more we uncover the depths of Hannah (though I still don’t believe this condones her behaviour or attitude), and her character grows enough that we start to hope there might be some spark of something happening between them.
Going back to my earlier reference to this novella not seeming to hold as ‘much’ (not as much as Camp Kiss did, anyway)—I’m not sure if it was actually that this was the case, or just that it felt like there was so much more to be told. So, hoping it’s the latter (which it probably is), I would really like one of the future books to be an expansion of their story, because I really feel as though we need to know what we didn’t (or can’t yet) see.
If you’re a fan of clean YA with great values and underlying messages, then you should check out the Camp Boyfriend series, for sure.