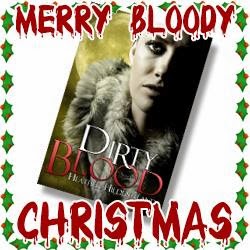 If you have followed my Friday Favourite post you already know I love the Dirty Blood series. When I read the first I immediately fell in love with the world Heather Hildenbrand created. She can write one heck of a book! This Christmas she is giving one very lucky person a chance to win a SIGNED copy of Dirty Blood and swag!!!

I killed a girl last night. I did it with my bare hands and an old piece of pipe I found lying next to the dumpster. But that’s not the part that got me. The part that scared me, the part I can’t seem to wrap my head around and still has me reeling, was that when she charged me, her body shifted – and then she was a wolf. All snapping teeth and extended claws. But by the time I stood over her lifeless body, she was a girl again. That’s about the time I went into shock… And that was the moment he showed up.
Now, all I can do is accept the truths that are staring me in the face. One, Werewolves do exist. And Two, I was born to kill them.

Wood Point Academy is not at all what I expected. For one thing, it looks like a cross between military school and Buckingham Palace. Everyone stares, the floors shine so bright you can see your reflection in them from a mile away, and no one smiles. Unless they're kicking your butt in the process.
At least I've got plenty to take my mind off the fact that my psycho cousin, Miles De'Luca, keeps calling and declaring his love and promising to come for me just as soon as he's destroyed anyone standing in our way. Wes isn't going to like that idea. So between Miles, Wood Point's evil welcoming committee, and the drill sergeant hottie trainer from hell, I just keep asking myself, how did I end up here?

Forty-six.
That’s how many hybrids survived the Hunter attack in the woods after I revived them with an injection of my blood. That’s how many followed me home to Frederick Falls. And that’s how many were now mentally linked to me through a blood bond.
Two days. Three valium. Fourteen hours of sleep.
That’s what it took to realize I wasn’t losing my mind as a result of the noise in my own head.
Sixteen.
That’s how many days have passed since I almost killed Alex. That’s how many days I’ve sat by his bedside, waiting for him to wake up. To ease the guilt, to understand his betrayal, to remember the exact shade of brown in his eyes.
Zero.
That’s my chances of skating by with Gordon Steppe and the Hunter Council. They want me for questioning. I’m afraid what’ll happen if I give them answers.