Synopsis:
Tyler can Cross into parallel realities. Employed by a secret organization, he collects data about worlds encountered to improve the Alternate Worlds Map. Except the organization have apprehended him, tampered with his memory, and accused him of a crime he can’t recollect. They must have the wrong seventeen-year old? Nope – even Tyler’s friends have evidence against him.

There are rules to being a Alternate Worlds Viewer:
DO NOT interact with the environment.
DO NOT interfere with events.
DO NOT reveal the ability to Cross.

Tyler has broken with one. But which? All of them?

Worst of all he hates his surname: Nitbone.

Chased by the organization, he will Cross into explosive worlds to uncover the real traitor or risk the lives of zillions.

Tyler Nitbone must interfere to undo the interference 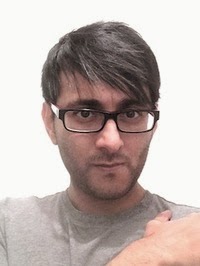 Imran Siddiq may have tried to leave Leicester a few times, but its become his place to wake up to two cats, freeze when the heating’s off and most of all, get down to writing. At a young age, his primary school teacher commented on his creativity and ability to tell stories.  At the age of 29, during a night in the jungle, the bug inside awakened, and for the last 5 years he’s been sacrificing every second that he can to write. A veteran of writing festivals, a presence on Twitter and gobbling up all forms of Star Wars and Lord of the Rings, he hopes he can bring a smile to others in the same way that he had, aged 5, reading with a torch under his duvet. Imran’s preferred genre  is YA Sci Fi, and he has a tendency to throw a droid in every novel.

How did you come up with the title?

Unlike previous novels where the title is a representation of a theme, TN is the protagonist – and the name – Tyler Nitbone – makes me take notice and giggle. Nitbone rolls off the tongue. I wouldn’t have used the name if it didn’t have that extra punch.

Is there a message in your novel that you want readers to grasp?

Oh most definitely. In fact it’s there on the cover as a tagline. Interfering in anything has consequences. They won’t always be bad, but they won’t always mean good either. Often people say or do something without realising the long term effect. TN is about how he must interfere to do the interference of a previous action.

How much of the book is realistic?

The bits that don’t involve the non-realistic parts… like parallel universes… and robots… and a certain orang-utan. Then again, maybe it is all possible.

Are experiences based on someone you know, or events in your own life?

TN is an extension of me whereby I always try to help and do good, but sometimes it can be misconstrued and put me in trouble. Poor TN… he doesn’t know when to stop and reflect.

Name one entity that you feel supported you outside of family members.

Every writer in the forums, Facebook and Twitter. All of them. They all inspired me to keep working hard. They are the shadows that we want to lurk with because they never leave your side.

Do you see writing as a career?

[Starts begging] – Yes, please.
It’s a difficult career to make a mark and claw back enough income to survive on, but hopefully one day, I will reach it.

If you had to do it all over again, would you change anything in your latest book?

Maybe make it more of a Poirot mystery, though, that would take away the fun factor and the youth that the protagonist brings to the plot.

Do you recall how your interest in writing originated?

My mother complained to my teacher, when I was 5 years old, that I was always reading under the duvet (at night) with a torch. I loved reading, and experimenting with my own stories. I loved to escape to another place. Hang on – is that a white rabbit I see running with a watch – see you later.

Is there anything you find particularly challenging in your writing?

Descriptive narrative. How much is too much? How much is not enough? What words to use? Do they need to know about the lever on the door because it might become important later. There are moments where I cringe at long passages of descriptions. Reading other authors’ and how they tackle this always helps.

Who designed the covers?

I seek out top-notch artists to create the character art. I pull together the art, and then create my text, style, background, colour changes, adaptations, tweaks and go all nuclear on creating what would grasp my attention. Covers are massively important. The TN cover is quirky and rather different from similar books in its genre, but still says YA Fiction from a visual viewpoint.

What was the hardest part of writing your book?

Not making the real antagonist obvious or to give away the conclusion without pushing the reader to read on. So throughout, I’ve placed red herrings, and questions upon answers. It’s like a mini-version of LOST but without making the reader frustrated.

Did you learn anything from writing your book and what was it?

To relax more and not try to make everything perfect in the first draft. By becoming the carefree writer that matched the attitude of the protagonist, I enjoyed my time more and reached the ending with confidence. Redrafting felt like walking a journey again with the map laid out.

Do you have any advice for other
writers?

Think Less and Write More.
Don’t aim for perfection. Yes, have a plot and an idea of what will happen, but just write. Don’t worry about the grammar, the edit, the change of names, scenery or people appearing/disappearing. Just write and reach the end. After that, you can be clinical with how you correct any issues. You’ll be surprised at how many words you can belt out.

Do you have anything specific that you want to say to your readers?

I’m a hard working author that has to balance the day job, which a strenuous role of responsibility, be ever present on the Social Media scene, and always look after my dearest cats. The time it takes to write and bring out something to the public eye takes courage, effort and belief. Please, do leave a review on Amazon, Goodreads, and other Vendors to let me know if I’ve done well, bad, or just enough. Your feedback helps to reward or instruct us of how to continue.