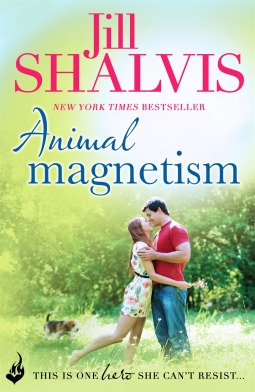 The first in the sexy, heartwarming Animal Magnetism series from the New York Times bestselling author of the Lucky Harbor series. Fans of Bella Andre, Robyn Carr and Rachel Gibson will adore these romances with Jill's irresistible combination of humour and heartbreak.Sunshine, Idaho, is a small, sunny town - the perfect home for man and beast. Well, maybe not for man, as pilot-for-hire Brady Miller discovers when his truck is rear-ended by what appears to be Noah's Ark. As the co-owner of the town's only kennel, Lilah Young has good reason to be distracted behind the wheel - there are puppies, a piglet and a duck in her Jeep. Still, she doesn't find it hard to focus on the sexy, gorgeous stranger she's collided with. Brady is just passing through, but there's something about Lilah and her menagerie that makes the temptation of staying in Sunshine one that's difficult to resist...Look for Dell's story next in Animal Attraction!

Animal Magnetism by Jill Shalvis was just an okay kind of read for me. Did I enjoy it? Yes. But did it grab me by the short and curlies and leave me seeking out moments of solitude just so I could delve back into this world whenever I put the book down? No, not really. But like I said, I did enjoy it. So, I guess, really, the book did its job.

The story focuses on the dual POV between Brady and Lilah. Both of them are likable. Both of them have nice enough personalities. Actually, I think that might be the point: they were both ‘nice’, and nice is such a nondescript way of stating an almost indifference when giving an opinion.

From the off, we see the attraction between these two, but for some reason, I didn’t quite ‘feel’ it. However, I stuck in there, because I was new to Ms Shalvis’ writing, and so wanted to see where she’d take me if given a chance. Hats off for not tossing this couple into bed too early on in a way that screamed of contriteness, even if we *could* already guess this was where the story would eventually end up. As a result of dragging it out a little, the situation that led to them getting some alone time felt natural, even if the manoeuvring of said initial scene seemed a little bit forced. Also, once the first deed was done, aside from plenty of narration from the duo telling us exactly what they felt when they saw the other—Brady more so than Lilah because Lilah just appeared to be permanently sex starved and horny—the chemistry between them seemed seriously toned down outside of the bed (or anywhere else they got hot and heavy). Which meant that almost every successive intimate scene between the duo also felt forced—until the final one. Because the final one was easily the most believable.

Okay, let’s focus somewhere other than the sex, then.

We have Brady, whose buddies (who just happen to also be Lilah’s buddies, but Lilah and Brady had never met due to Brady being away and serving his country) want him to stick around, and so buy a helicopter that needs fixing up because they know, with his background, he won’t be able to resist. This angle of the story, I really liked. It was a solid, believable angle, and Adam and Dell’s relationship with Brady, and their brotherly-ness, dragged me along with them until I, too, wanted Brady to stick around. Wanted him to create some roots, some connections worthwhile sticking around for. In fact, Dell and Adam may well have been my favourite characters of the book. Their loyalty to Brady, their protectiveness toward Lilah. They added a LOT to this story and created great flavour, with a decent job done of setting up the potential romance for book two.

And on the other side of the main coin, we have Lilah. In all honesty, her romance gone bad didn’t quite ring true for me, and certainly didn’t hold any uniqueness—to the point, I don’t believe it added an awful lot to the story. I also kept searching for a really solid reason for the watchfulness and caring attitudes of Dell and Adam, but didn’t really find one, especially as Lilah had no issues with ANY guys in her hometown and even her exes still treated the woman like she was a saint.

However, I’d imagine most readers of Ms Shelvis’s books are mostly interested in the romance, and she does deliver well enough on that angle, and there are some decent moments within the sex scenes that will keep readers returning for more, as well as the very sweet happy ending. Not to mention how refreshing it was for the man to show his eagerness for a relationship with far more vibrancy than the female. So, all in all, an enjoyable enough read, but I would have liked to see a little more substance to the plot.