Running on Empty by Collette Ballard Book Blitz and Giveaway! 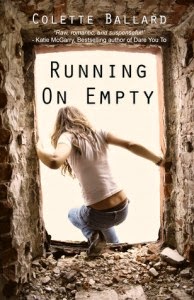 What does it feel like when you die—in those final moments? Do you feel the physical pain, or just the pain of your regrets? What does it feel like when you realize you can’t answer these questions because you’re not the victim?
You’re the killer.
River Daniels lives an ordinary life as a high school junior growing up in the confines of rural Texas until her boyfriend’s brutal attack leaves her both a murderer and a fugitive. When River’s closest girlfriends come to her aid, they make a hasty decision to not only help her, but leave their own troubled lives behind and join in her escape.
The girls manage to elude police for months, but with every near-miss, River’s life spirals further out of control, until she finally hits rock bottom. Realizing she must stop endangering her friends and find evidence proving she acted in self-defense, the girls decide to make a risky move. River must face her ugly past and the one person she was protecting the night her world caved in, the guy she has loved for as long as she can remember.

Excerpt :
Disappoint him? Was that his main concern? Slack-mouthed, I stared at the phone until Justice’s voice startled me from behind. “Everything okay?”
Hoping he hadn’t heard any of my conversation, I put on a smile and turned to face him. “Everything’s fine.” I twined my fingers around a chunk of hair at the base of my neck. “That was just Logan reminding me of the Seniors’ Breakfast that I’m about to miss.”
“You’re goin’?” He stared at me like I had a pink squirrel tattooed on my forehead.
I wanted nothing more than to stay here the rest of the day and share my pain with Justice—even if it was in silence. Knowing Logan would never go for that, I pushed the gaping hole in my heart aside. “I’m good now, I had a good cry.” I swatted my hand.
“Ya know, today’s the first time I’ve ever seen you cry.” He leaned his back against the truck, obviously missing the point that I was in a hurry. “You wouldn’t even cry that day you fell off my pony and broke your arm when you were seven.” His face grew serious. “Or when your—”
“Yeah, I’m stubborn that way.” I wiped my hands on my jeans, hoping like hell he didn’t finish his sentence. Now wasn’t the time for a reminder of my reaction to my mom’s death—or rather, lack of reaction.
In my attempt to be strong for my younger sister, I disconnected from my emotions, from things I loved—from Justice. It worked for me until Jack came home wasted one night and I unleashed six months’ worth of the seven stages of grief on him. He slapped me so hard, I didn’t cry for the next five years. Until today. 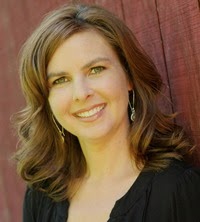 Colette grew up on a dairy farm in rural Kentucky. She survived the high school experience back in the day when Aqua Net was bought in bulk and mullets were cool. That’s also when she realized that her constant daydreaming wasn’t a curse, but a useful skill—one she used like a lethal weapon to combat her frustration over the haunting question: What does the alphabet have to do with math anyway? Unfortunately, her ninja daydreaming skills only increased her desire to write—not her algebra grade.
After surviving the hairstyles and torturous math classes of her high school years, she wandered a bit—even moving to the farthest northwestern corner of the United States, then to the farthest southeastern corner. She finally settled in the one red-light town she started in, where she continues to live today with her husband and three children.