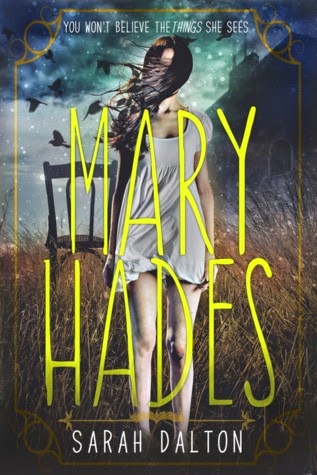 Synopsis:
Not many seventeen year old girls have a best friend who’s a ghost, but then Mary Hades isn’t your average teenager.
Scarred physically and mentally from a fire, her parents decide a holiday to an idyllic village in North Yorkshire will help her recover. Nestled in the middle of five moors, Mary expects to have a boring week stuck in a caravan with her parents. Little does she know, evil lurks in the campsite…

Seth Lockwood—a local fairground worker with a dark secret—might be the key to uncovering the murky history that has blighted Nettleby. But Mary is drawn to him in a way that has her questioning her judgement.

Helped by her dead best friend and a quirky gay Goth couple, Mary must stop the unusual deaths occurring in Nettleby. But can she prevent her heart from being broken?

The first in a series of dark YA novels, Mary Hades follows on from the bestselling Kindle Single My Daylight Monsters. A spine-tingling tale with romance, readers will be shocked and entertained in equal measure.

AUTHOR BIO
Sarah grew up in the middle of nowhere in the countryside of Derbyshire and as a result has an over-active imagination. She has been an avid reader for most of her life, taking inspiration from the stories she read as a child, and the novels she devoured as an adult.

Sarah's debut novel The Blemished is a fast paced young adult dystopia set in a fractured Britain. It follows the events of Mina Hart, a young Blemished girl who has a dangerous secret, as she tries to escape the dreaded Operation and get out of Area 14.