The Oversight by Charlie Fletcher Blog Tour and Review! 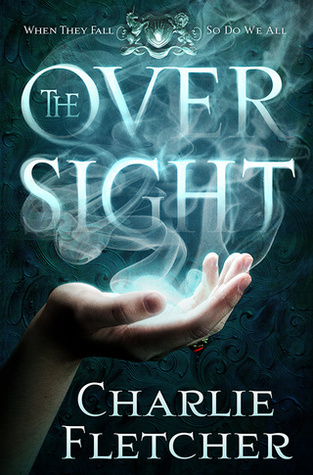 Only five still guard the borders between the worlds.
Only five hold back what waits on the other side.

The Oversight, a secret society that polices the lines between the mundane and the magic, once counted hundreds of brave souls among its members.  Now their number can be tallied on a single hand.

When a drunkard brings a screaming girl to the Oversight's London headquarters, it seems their hopes for a new recruit will be fulfilled - but the girl is a trap, her appearance a puzzle the five remaining guardians must solve before they lose each other, and their society, for good.

As the borders between the natural and the supernatural begin to break down, brutal murders erupt across the city, the Oversight are torn viciously apart, and their enemies close in for the final blow.

This dark Dickensian fantasy spins a tale of witch-hunters, magicians, mirror-walkers and the unlikeliest of heroes drawn from the depths of British folklore. Meet the Oversight, and remember:
When they fall, so do we all.

“Exciting, exhilarating, scary and moving in about equal measure, The Oversight is a teeming world of dark deeds and dark magics, brilliantly realised. This feels like the start of something amazing.”
- M. R. Carey, author of The Girl With All The Gifts

Charlie Fletcher is a screenwriter and children's author living in Edinburgh. His Stoneheart trilogy has been translated into a dozen languages and the film rights have been sold to Paramount. The first volume, Stoneheart, was shortlisted for the Branford Boase award and longlisted for the Guardian Children's Fiction Prize. His standalone novel for children, Far Rockaway, was published last year to great critical acclaim and has been longlisted for the Carnegie prize.


There is a secret society that patrols the border between the known and unknown. On one side you have the normals and on the other you have the magical people. The society is called the Oversight. There was once hundreds of them but now there are 5.

When Lucy is brought to the Oversight headquarters, she was bound and gagged and had no clue who they were or what they wanted from her. When these people start saying things that they shouldn't know, Lucy realises there's more at play here than what she thought! See Lucy is different, when she touches things she gets visions. Everyone told her she was crazy and she started believing them until Sarah, the head of the Oversight, told her what she was. She is a Glint like Sara.

The second Lucy arrives it sets off a sequence of events that may cause the end of the society for good. Will the 5 be able to stop the things in the shadows from ending them? Who is this girl and why was she brought there?

Well this was such a pleasant surprise! When I was approached to review this it was the cover that caught my eye but it was the blurb that made me say yes.

This started out slow but the authors writing style kept me hooked. Rich in detail and set in Victorian London, I was captivated from the very start.

The whole lore of the Oversight was absolutely fascinating. They are a group of 5 that guard the divide between our world and the world of magic. Once there is always 5 in the group then the world is safe. We have Sarah, Cook, Mr Sharp, Hodge and The Smith. All very different but all intriguing and likable characters.

From the Oversight themselves to the creepy things in the shadows, we see a world full of magic and intrigue. It is a book that unwinds its secret slowly and should be savoured. From the dark and dangerous streets of London to the countryside with a travelling circus, The Oversight pulls you in and doesn't let go. The authors writing style was exquisite and mesmerising, he doesn't just tell the story, he makes you apart of it and weaves it around you. With twist after twist, fascinating characters and its dark atmosphere The Oversight is a must read.