The Frost of Springtime by Rachel L. Demeter Blog Tour and Giveaway! 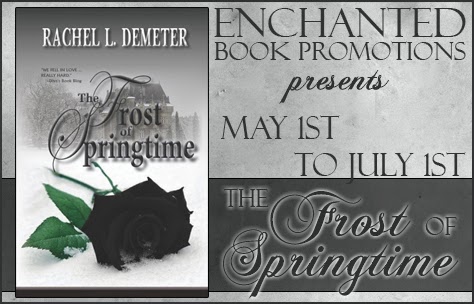 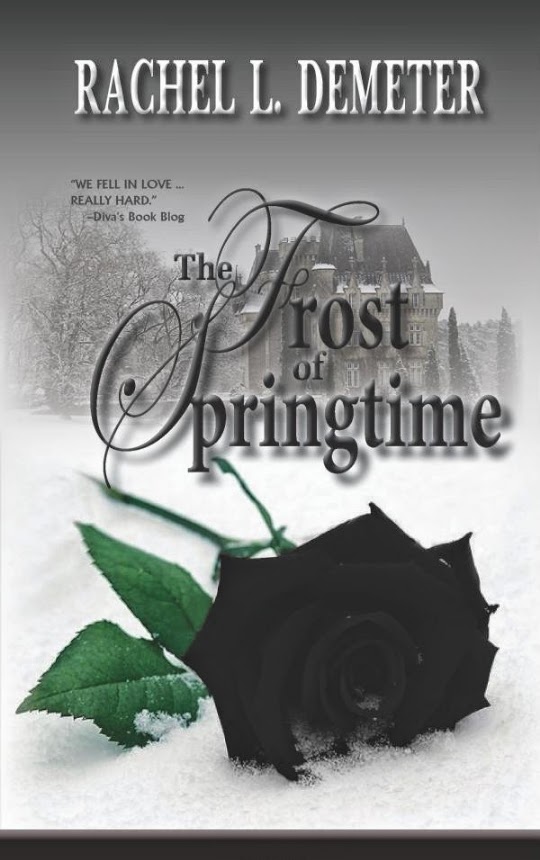 To rescue her was to rescue his own soul.
On a cold Parisian night, Vicomte Aleksender de Lefèvre forges an everlasting bond with a broken girl during her darkest hour, rescuing her from a life of abuse and misery. Tormented by his own demons, he finds his first bit of solace in sheltering little Sofia Rose.
But when Aleksender is drawn away by the Franco-Prussian war, the seasons pass. And in that long year, Sofia matures into a stunning young woman—a dancer with an understanding of devotion and redemption far surpassing her age.
Alongside his closest friend, Aleksender returns home to find that “home” is gone—replaced by revolution, bloodshed, betrayal—and a love always out of reach. Scarred inside and out, he’s thrust into a world of sensuality and violence—a world in which all his hours have now grown dark, and where only Sofia might bring an end to the winter in his heart.

Inspired by the 1871 Paris Commune, The Frost of Springtime is a poignant tale of revolution, redemption, and the healing power of love.

BRIEF EXCERPT
The heat of their bodies mingled as one. With each breath, Aleksender drank in the sweet essence of his beloved ward. His mind swam with unorthodox visions and desires. He inclined his head, lost to the power of her nearness, entranced by everything that was Sofia.

Each word infused Aleksender with a delicious and undeniable warmth. Intoxicated by roses and wintertime, he found it difficult to speak, difficult to think. Breathless, he swallowed and met the haunting depths of her eyes.

“Please,” she dreamily murmured, “I want you to kiss me again…”

Praise for the book

“I am astonished at this being Rachel L. Demeter’s debut work, for in form and style, it is very much a tour de force. A riveting story of love and courage in the aftermath of a brutal war, the author brilliantly juxtaposes the hazing splendor of French nobility and the impassioned elegance of two people in love, despite all the world’s oppositions. The title is, in a sense, a representation of change: the beginning of a new spring with La Belle Époque and the transition into a new era, for the world and our protagonists.

The wistful loveliness of the setting paints a picture of a crying France, blending in with the dynamic romance perfectly. Or rather, it does not merely blend in the background as much as glitters like the brightest jewel, shining with a vibrancy that makes one want to relieve the halcyon days of grand old Paris. I was captivated by the setting, the lush writing of Rachel L. Demeter, and the subtle expressiveness of the characters, which all compelled me to research more of the historical background, of the 1871 Paris Commune, through which this story is made more infinitely dearer.” – Buried Under Romance

“We are in awe. The Frost of Springtime is a MUST HAVE! Despite that we loved the true facts, we fell instantly in love with the story. It was dark, emotionally devastating, and sensual. The innocence between the two main characters was beautiful and their love grew so strong throughout the story with such grace. One of us even cried while reading The Frost of Springtime. We loved the cover, we loved the writing style, and we adored the characters. We fell in love, really hard." – Divas Book Blog

“This novel is intricately detailed and wonderfully written! Opening with a heartbreaking scene, I was immediately drawn to the story of Aleksender and his Sofia. Of course, as the story moved on, other enchanting characters helped to make this poignant book complete. The author has blended historical facts with fiction skillfully, and presented several narratives flawlessly. It’s beautiful! I loved it!” – Romancebookworm’s Reviews

“I absolutely love this book. The Frost of Springtime shows how love and tragedy go hand in hand and that love can actually be more powerful than anything. I have found that most books do not hit this point right on the nail like this one does. It’s a Historical Romance and let me just tell you this is one book I couldn’t put down.” – Magic Within The Pages

“WOW!! The Frost of Springtime is a powerful, epic love story unlike anything I’ve ever read before. The emotional and visual/sensory depth is astounding. I felt Aleksender and Sofia’s connection from beginning to end.

Aleksender’s path to healing was at times breathtaking and heartbreaking. This is a hero who loves his woman with every last breath, every fiber of his being… and there’s nothing he wouldn’t do for her. AMAZING cast of secondary characters as well… a 'villain' who actually leaves you morally torn! Beautifully written (loved the vivid imagery and descriptions!), dark, unusual, rich with history, epic scope, and a soul deep love that only comes once in a lifetime… Brava!!!” – Sivonna, an advanced reader

Excerpt :
Bête Noire’s walls shook as a gust of wind moaned in the distance. Soft and shameful sobs accompanied the ambiance with haunting precision. The child sank to the crutch of her knees—defeated, starved for food and warmth—as if she might escape the world in that way.

Moved by her humiliation far more than he dared admit, the dark stranger removed his bowler hat and crouched to her level. He replaced the hat after running an unsteady hand through his hairline. His chest lurched as the child adjusted the torn tatters of her clothing. Swishing off his frock coat, he draped the material over her body like it was a security blanket.

She grasped the wool with her good hand, plummeted onto her bottom, and pulled both legs against her chest. Her face sank from eye-line as she hid below a fortress of upright knees. Tiny and perfectly helpless, the abundance of thick folds seemed to devour her whole.

The man softened at the tragic sight that lay before him; icicles, which had too long clung to his chest, deftly thawed and melted away. He felt an incredible pain, a sincere compassion and aching sympathy, which he’d believed he no longer possessed. Despite his better judgment and a lifetime of indifference, his heart broke.

Damnation. He longed to turn his cheek in apathy and disgust. He yearned to feel numb to the girl’s pain and loneliness. He wanted to hate the child—to despise the child—for having invaded his sole sliver of peace: darkness.

Tucked within a foreign part of his heart, only emptiness had ever existed. A terrible and twisted emptiness. And for seventeen of his twenty-seven years, he’d filled that internal void with darkness.

Eyes of emerald locked with eyes of sapphire, each pair searching the secrets of its counterpart’s soul. He could sense the girl’s will to live, to simply survive the world and all of its cruelties, as if it was a tangible thing. And, within that lucid moment, a recollection from his own childhood emerged. The emptiness eased and lifted. His heart pounded as a montage of horrors resurrected—just barely …

A whisper of half-sobbed words: “Life is pain. Love is a pretty lie.” Empty and burning tears. A seductive glint. Steel, cold and rusted, plunged into a slate of creamy flesh. A distorted prayer: “Do not love the world or anything in it. The world and its desires pass away. But those who do the will of God shall live forever.” A moment of silence followed by a pair of beautiful, breathless lungs—

The jumbled tangle of memories disappeared as quickly as they’d come. Once more the emptiness returned. But one truth remained—long ago, something had happened. Something unutterable. Something his conscience and consciousness had chosen to forget.

And then, miraculously, for the first conceivable time in the man’s life, a ray of hope shined through his darkness.

Perhaps the girl could help him find himself.

Perhaps two orphaned souls could unite as one.

Consumed by his sudden revelation, the dark figure lifted his hand and attempted to brush a stray curl from her eyes. Jerking free of his touch, she flinched out of his reach—just as he’d expected she might—behaving like a mongrel who’d only known beatings.

He retreated with a dejected sigh and shook his face. “Might I know your name, ma petit?”

“Sofia …” Her voice was little more than a whisper and a true breath of fresh air.

“Good to know you, my dearest Sofia.” The man inclined his head, gave a charmingly crooked grin, and clasped a palm to his heart. Aware that everything had changed, it beat against his ribcage at a rapid pace, the rhythm hard and strong. “I am Alek…” 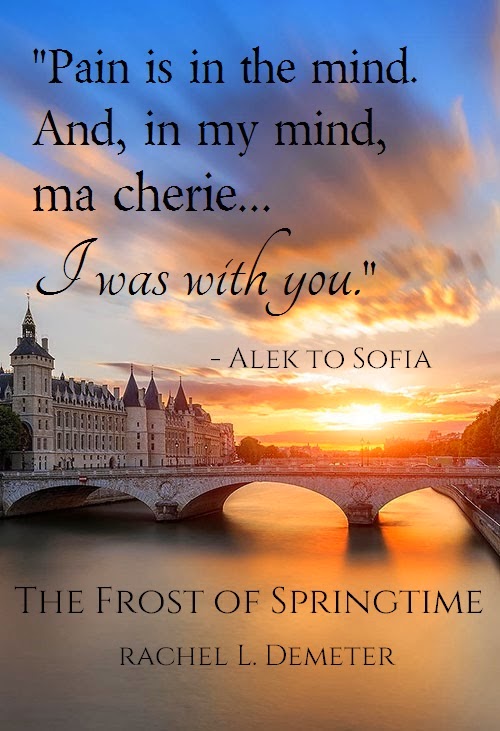 Rachel L. Demeter lives in the beautiful hills of Anaheim, California with Teddy, her goofy lowland sheepdog, and high school sweetheart of ten years. She enjoys writing dark, edgy romances that challenge the reader’s emotions and examine the redeeming power of love.
Imagining stories and characters has been Rachel’s passion for longer than she can remember. Before learning how to read or write, she would dictate stories while her mom would jot them down for her. She has a special affinity for the tortured hero and unconventional romances. Whether sculpting the protagonist or antagonist, she always ensures that every character is given a soul.
Rachel strives to intricately blend elements of romance, suspense, and horror. Some common themes her stories never stray too far from: forbidden romance, soul mates, the power of love to redeem, mend all wounds, and triumph over darkness. Her dream is to move readers and leave an emotional impact through her words.