The Beast of Callaire by Saruuh Kelsey Blog Tour and Giveaway! 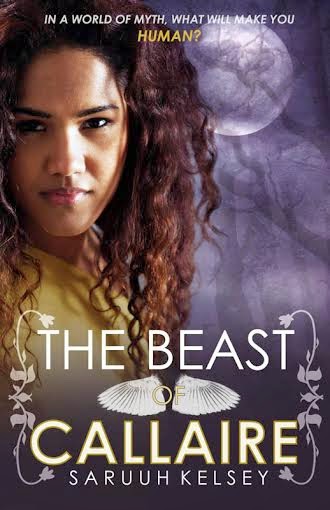 Yasmin is a descendant of the Manticore. A creature of Persian mythology. A Legendary.
But she doesn’t want to be. Unlike the Legendaries in The Red, Yasmin wants nothing more than an ordinary life. She tries to fool herself into believing that she doesn’t change into a beast every full moon and savagely kill innocent people.
But when Yasmin starts hearing a voice in her head and is drawn into dreams that aren’t her own, she is led to Fray—a girl who once saved Yasmin from hunters, who has shadowy memories that hint at her having Legendary magic—and Yasmin is catapulted into a life of Majick and malevolence.
Despite the danger around her and Fray, Yasmin might finally have a chance at being a normal girl with a normal girlfriend. But with Legendaries being killed, a war between the Gods brewing, and the beast inside Yasmin becoming stronger each moon, her mundane life is little more than a dream.

My publishing journey is quite an unconventional one. Two years ago I decided I wanted to make my debut series, The Lux Guardians, available for free. Because no traditional publisher would give me the chance or the means to do that - since each publisher is a business and they quite rightly need to make money to keep publishing new books - I chose to self publish.

My first novel The Forgotten was published last year in both digital and paperback formats and available free of charge. It was crazy and at times stressful (who thought it was a good idea to fund the whole costs of printing and posting books? Oh right, that would be me), but it’s been great to see people reading and responding to the story, and especially, to see people being able to read a book they otherwise wouldn’t have been able to afford to buy. That’s why I wanted my first series to be free - so people could access it no matter what their situation may be.

My second novel, The Beast of Callaire, is different in the sense that it isn’t free, that is has a totally different audience, and, because of that, a whole other publishing journey. I stuck with self publishing, simply because the control over every aspect of the book is important to me (I’m a bit of a perfectionist) and I wasn’t sure there’d be a traditional publisher that would take a chance on my novel - there are many things that could make it a risk to someone who needs to make money from it: it’s about a girl of African descent, who happens to be a lesbian, and it’s also a pretty short book, all of which can make it difficult to market. According to publishers, at least.

Because I chose the self publishing route, that shaped the journey The Beast of Callaire took to publication. It went through all the regular phases - editing, more editing, yet more editing, cover design, book design, proof reading - but much quicker than a book with a publisher would. Books take years to be published traditionally, because each publisher, editor, etc, has more than one book to focus on, but because I only had The Beast of Callaire it took me 8 months to get from first to final draft instead of the two years it would have taken otherwise.

And of course my publishing journey will never be fully complete until I decide to hang up my laptop and stop writing, which is something I really can’t see happening until I’m, say, 80 years old and my hands can no longer find the right keys.


My next stop on the publishing journey will be a return to free book publishing, with the second book in the Lux Guardians series, The Wandering.

Saruuh Kelsey is the author of the Lux Guardians series. Her debut and the first in series, THE FORGOTTEN, a YA science fiction set in Victorian London and London 25 years in the future, is out now for free. Book two, THE REVELATION, releases October 7th. THE BEAST OF CALLAIRE, the first novel of a new YA fantasy series, with a same sex paranormal romance, is out May 20th.
Website: http://saruuhkelsey.co.uk/
Twitter: https://twitter.com/luxguardians
Tumblr: http://theluxguardians.tumblr.com
Blog: http://syntaxreviews.blogspot.co.uk/

The Giveaway:
2 Beast of Callaire paperbacks and one swag pack consisting of a paperback, postcards, stickers, and a tote bag open Internationally.