Take Me On by Katie McGarry Review! 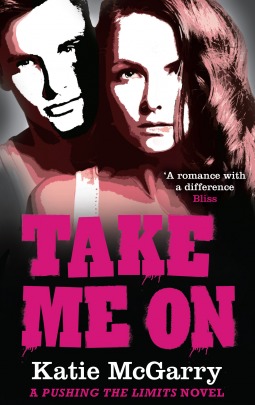 Acclaimed author Katie McGarry (Pushing The Limits, Dare You To, Crash Into You) returns with a new story about love, loss and what winning really means...Champion kickboxer Haley swore she'd never set foot in the ring again after one tragic night. But then the guy she can't stop thinking about accepts a mixed martial arts fight in her honor. Suddenly, Haley has to train West Young. All attitude, West is everything Haley promised herself she'd stay away from. Yet he won't last five seconds in the ring without her help.West is keeping a big secret from Haley. About who he really is. But helping him fighting for her is a shot at redemption. Especially since it' s his fault her family is falling apart. He can't change the past, but maybe he can change Haley's future.Hayley and West have agreed to keep their relationship strictly in the ring. But as an unexpected bond forms between them and attraction mocks their best intentions, they'll face their darkest fears and discover love is worth fighting for.

Hmm, what to say about Katie McGarry’s Take Me On without, yet again, sounding like a blathering fool over one of her books …. because, really, I’ve yet to read anything by this lady that hasn’t swept me along, broken my heart, and made me fall head over heels in love.

Though, let me just add the disclaimer: no matter how much I appear to have fallen in love with West at any point during this review, Isaiah and Noah and still my men. MINE, I tell you!

Anyhoo, moving on. Meet Haley. She’s tough, she’s independent, and she loves fiercely, making her one relatable and admirable chick. From the very first glimpse we get inside Haley’s head, I liked her. Her character, her personality, her attitude. Her family situation pretty much sucked, but rather than create a divide that could create competition amongst siblings/peers, she and her brother and cousin seemed to have formed an incredible bond. This was only one of the refreshing aspects of this book. Too often when there is a bully in the household, the bullying gets mimicked by younger members and one-upping becomes the norm in order to gain the totally wrong kind of glory. However, in Take Me On, we see a solid support structure built from it, and I loved the relationship(s) that have been created from that. So, not only do we connect instantly with Haley, but we also almost want to be a part of her sucky-situated family, just so we can experience this relationship, too. Because (just so you know) her cousin and brother are freaking awesome characters also—Ms McGarry, they NEED their own book!

And running narration around Haley’s side of the story is West. We meet him in Crash Into You, in which he is portrayed as Rachel’s older jerk-face of a brother who is self-centred and whorish and only likable for his roguishness and pretty much nothing else. HOWEVER!!!! As they say, there is always more than one side to a story, and West has a whole lotta sides to his! Because, so often, there can be ugliness marring the depths of a person’s world that those on the outside will never know of, and things often aren’t as they seem. It’s human nature, though, I guess, to preconceive the reasons behind a person’s personality or behaviour or attitude, and those preconceptions can be just as rife when reading. All I can say is, all of those who thought you had West’s number? Trust me, you don’t. He is NOTHING like we thought he was. And everything we thought he wasn’t. To add to that? His inner turmoil over what happened to Rachel in Crash Into You, plus the unfolding emotional torture Ms McGarry has thrust upon the poor dude in this book, is heartbreaking. I wanted to cuddle the poor dude to my bosom, stroke his hair, and promise to make everything right for him again. And his commitment to making himself a better person? Admirable, for sure (even though occasionally idiotic, too). Oh, and he’s hot. Hot always helps us readers to fall in love, right?

Read it. You know you want to.