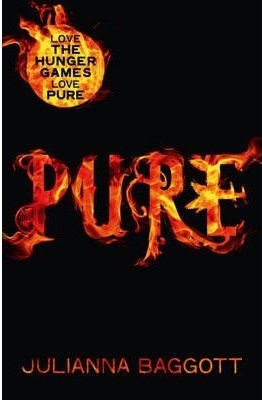 We know you are here, our brothers and sisters . . .Pressia barely remembers the Detonations or much about life during the Before. In her sleeping cabinet behind the rubble of an old barbershop where she lives with her grandfather, she thinks about what is lost-how the world went from amusement parks, movie theaters, birthday parties, fathers and mothers . . . to ash and dust, scars, permanent burns, and fused, damaged bodies. And now, at an age when everyone is required to turn themselves over to the militia to either be trained as a soldier or, if they are too damaged and weak, to be used as live targets, Pressia can no longer pretend to be small. Pressia is on the run.Burn a Pure and Breathe the Ash . . .There are those who escaped the apocalypse unmarked. Pures. They are tucked safely inside the Dome that protects their healthy, superior bodies. Yet Partridge, whose father is one of the most influential men in the Dome, feels isolated and lonely. Different. He thinks about loss-maybe just because his family is broken; his father is emotionally distant; his brother killed himself; and his mother never made it inside their shelter. Or maybe it’s his claustrophobia: his feeling that this Dome has become a swaddling of intensely rigid order. So when a slipped phrase suggests his mother might still be alive, Partridge risks his life to leave the Dome to find her.When Pressia meets Partridge, their worlds shatter all over again.

Pure by Julianna Baggott is a post apocalyptic-come-dystopian gem. I headed into it blind and with no expectations and found myself immediately drawn into this well-crafted world. After a ‘detonation’ has left the earth a shadow of its former self, the residents still left standing—none of them (at least, those outside of ‘the dome’) intact—are left to fend for themselves in a new order of life. And said new order involves adhering to rules and regulations, teenagers being rounded up once they ‘come of age’, killing for sport, hunger and desperation, manipulation, and living in fear but also in hope.

It ‘appears’ that the only ones who’re safe are those living within the dome—a structure created prior to the blast that ‘some more fortunate’ characters managed to reach in time to save themselves from the fallout. And of those existing outside of the dome? There isn’t a perfectly human specimen left amongst them. Some have merged with the earth, some with animals, some with inanimate objects. It’s a refreshing read indeed where pretty much every character, bar one, that the author wants the reader to fall in love with is scarred/deformed/mutated—even more so as, other than the references to their physical imperfections, those unnatural aspects of them are so much a part of the character that the reader 100% sees the character as a whole much more than concentrating on their irregularities. And I loved this. I loved that we’re given a bunch of folk who are disturbingly ‘messed up’, yet I still loved them, still found myself endeared or attracted to them, still found them (*cough* Bradwell *cough*) beautiful in my mind’s eye—and I definitely found them intriguing. It’s a great reminder that beauty comes from within, and within the pages of Pure, it’s also very well handled.

Oh, and those abovementioned mutations? They’re horrifying. Like, scary horrifying.

So enough about the characters, what about the world building? I can’t praise it enough. It’s well thought out, well woven, seriously well described, and not a moment passed within the book that I didn’t understand what the author was trying to plant in my head. Think Hunger Games level of world building and you’ve about hit the nail on the head for that in Pure.

And the plot itself? Well, I’m not actually going to delve into that other than to say it’s a goodie. Because there are (as stated above) manipulations and double crossing and family secrets and twists and turns, and whilst this isn’t a fast read by any means—what book with big world building ever is—I found the closer I got to the action, the faster I ploughed through the pages, and the closer I got to the end and the reveals, the more eager the pace became to keep nudging me along.