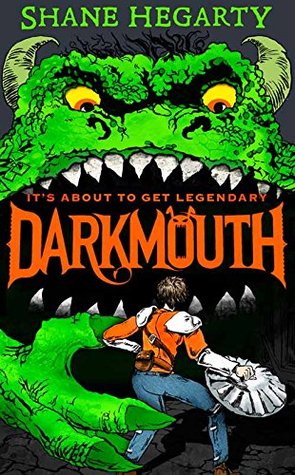 A monstrously funny debut from the new star of middle-grade adventure. Ages: 9+ There are towns where the border between our world and the world of monsters - properly called Legends - is thin. One of those towns is Darkmouth. There, our hero Finn is the son of the last remaining Legend Hunter - which means that one day soon he will be the last remaining Legend Hunter. Except... he's a bit rubbish at it. And in a spectacularly unfortunate coincidence, the terrifying leader of the monsters is in the midst of planning an all out attack on earth... in Darkmouth.

Darkmouth is the last town that seems to be plagued with Legends. Finns father is the Legend Hunter in Darkmouth and is in the process of training Finn, except Finn doesn't want to be a Hunter, he wants to be a vet! Finn hates chasing monsters, plus he isn't very good at it but he trains to keep his father happy.

When a new girl moves to Darkmouth, she tries to make friends with Finn, but is she who she seems? Why is Darkmouth the only town left that's plagues with the monsters? Why does there seem to be more monsters coming through than ever before? Finn had to find all these answers before it's too late.

There is so much to like about this book but let's start with the characters. Finn was awesome. He is an ordinary child thrown into an extraordinary situation. He just wants to be normal but that's impossible when you are the son of a Legend Hunter. My heart went out to him at times because he longs for friends but nobody wants to be near him. He hates hurting the monsters but he has no choice. He is equal parts scared as he is brave. He isn't anything special and yet that's whats special about him!! He will be easily relatable to every child.

His father is the last active Legend Hunter and he was hilarious at times. He loves his job and can't see why Finn doesn't so he pushed Finn to be his best. I loved the banter between Finn and Hugo and the relationship they have.

Plot wise, it was really fast paced and action packed. I loved the idea that the monsters come through a portal and the idea of the Legend Hunters. I also loved the fact that the hunters are just ordinary people and have no powers. They use their brains and their skill to trap the monsters. The variety of monsters is another plus for the book! The author brings them to life with his vivid descriptions and you can picture them in perfect detail.

In all, Darkmouth is a fresh and fun filled read. With it's witty dialogue and well written characters, it's a must read. When you start the book you will be drawn into the world that Shane Hegarty has created, and you won't want to leave. This book is one that any age will read and love and I, for one, am eagerly looking forward to the next installment.