Run to You Series by Clara Kensie Book Blitz and Giveaway!

*Double RITA finalist!* Last year, Clara Kensie's YA romantic thriller RUN TO YOU series was released as a serial in six installments. Since then, RUN TO YOU was named RT Editors' Best Books of 2014, and it finaled in the RITAs for Best Young Adult Romance and Best First Book (winners announced in July). Even better, Harlequin Teen heard your demands, and they've compiled the serial into two full, complete books! Run to You Book One (originally published in three installments as First Sight, Second Glance, and Third Charm) is now DECEPTION SO DEADLY. The sequel (originally published in three installments as Fourth Shadow, Fifth Touch, and Sixth Sense) is now DECEPTION SO DARK. Clara is delighted to offer up both books in exchange for honest reviews on Amazon and Goodreads.

Fill out this form if you would like to request a review copy! 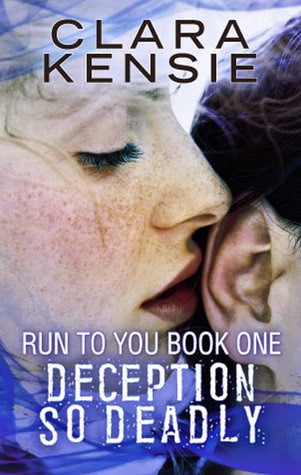 DECEPTION SO DEADLY (Run to You Book One)
by Clara Kensie
Release Date: 05/01/15
Harlequin Teen
325 pages

Originally published as the Run to You serial parts 1-3: First Sight, Second Glance, and Third Charm.
Deception So Deadly is the complete first novel in the two-book Run to You series, a riveting romantic thriller about a family on the run from a deadly past and a first love that will transcend secrets, lies and danger…
Sarah Spencer has a secret: her real name is Tessa Carson, and to stay alive, she can tell no one the truth about her psychically gifted family and the danger they are running from. As the new girl in the latest of countless schools, she also runs from her attraction to Tristan Walker—after all, she can't even tell him her real name. But Tristan won't be put off by a few secrets. Not even dangerous ones that might rip Tessa from his arms before they even kiss…
Run to You is Tessa and Tristan's story—two full-length books about psychic gifts, secret lives and dangerous loves. Danger. Deception. Betrayal. It must be true love. 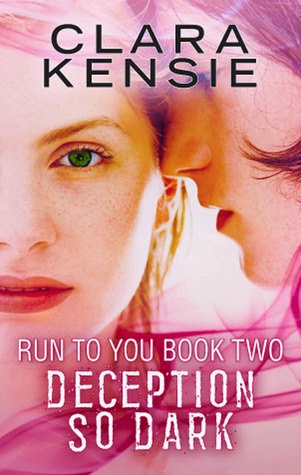 Originally published as the Run to You serial parts 4-6— Fourth Shadow, Fifth Touch, and Sixth Sense.
Deception So Dark is the complete second novel in the Run to You series, a riveting thriller about a family on the run from a deadly past, and a first love that will transcend secrets, lies and danger…
With no more secrets to keep them apart, Tessa and Tristan embark upon a desperate search to find her missing brother and sister. But not even Tristan can keep Tessa safe from the hostile classmates at her new school…or from the nightmare that haunts her even while she's awake. As Tessa's nightmare becomes all too real, her hope of getting her family back together feels ever more out of reach. When a psychic warns her that leaving town may mean her death, Tessa still cannot stay when she uncovers a potential lead to her brother and sister. Not even if she must go alone and risk losing it all: Tristan, her family, and even her life.
Run to You is Tessa and Tristan's story—two full-length books about psychic gifts, secret lives and dangerous loves. Danger. Deception. Betrayal. It must be true love.

FIVE RANDOM FACTS ABOUT THE RUN TO YOU SERIES:
1.      At sixteen, the heroine, Tessa, is as short as someone can be on the “normal” scale: four feet, ten inches. Someone once questioned if that height was realistic for someone her age, but both my step-sister Dana and my friend Lisa are 4’10.” So yes, it is.
2.      The hero, Tristan, doesn’t play football, but he is a Green Bay Packers fan. This just about kills my husband, who is a Chicago Bears fan. He feels betrayed.
3.      Tessa’s mother, Wendy, is inspired by Carrie White from Stephen King’s CARRIE, if she had grown up without the religious fanaticism and if she hadn’t gone to prom.
4.      Up until the last moment, DECEPTION SO DEADLY had two chapters labeled Chapter 36. It went 35, 36, 36, 37… I never noticed, and neither did anyone else, until the copy editor saw it at the very last stage of editing.
5.      My friend Mary told me about the song “Wildflowers” by Tom Petty after reading the original draft of DECEPTION SO DEADLY, and realized the lyrics would be perfect for it. That song has since become Tessa and Tristan’s theme song and is mentioned often in the books.
FIVE RANDOM FACTS ABOUT CLARA KENSIE:
1.      I have an unfounded, irrational fear of falling down the stairs. I am constantly warning people to be careful on the stairs. Stop playing on the stairs! Get away from the stairs!!!
2.      My pets, from childhood to current: Whiskey, a white West Highland Terrier; Daisy, a white and brown English Bulldog; Fletch, a black and white Beagle/Terrier/Dachshund mix; and The King of Chaos, a black and white short-haired domestic cat that more than lives up to his name. A psychic once told me that Whiskey, who died when I was eight, still follows me around everywhere I go.
3.      When I’m stressed, I have nightmares about getting lost in labyrinth-like houses, being hunted by zombies or giant rag dolls.
4.      In college, I triple-majored in psychology, sociology, and social services, and I minored in criminal justice. I visited Federal and state prisons, and I interned at a residential facility for pregnant and parenting teenage girls who were wards of the state. I loved working there, and I loved those girls.


5.      My favorite outfit to wear is an oversized hoodie, jeans, and my Chuck Taylor All-Stars. It’s pretty much my uniform. I’m wearing it right now. My dentist even commented on it when I went in to get a cavity filled: “Didn’t you wear that same sweatshirt last time you were here?” Why, yes. Yes I did.

Clara Kensie, author of dark fiction for young adults…don’t forget to breathe…
Clara Kensie grew up near Chicago, reading every book she could find and using her diary to write stories about a girl with psychic powers who solved mysteries. She purposely did not hide her diary, hoping someone would read it and assume she was writing about herself. Since then, she’s swapped her diary for a computer and admits her characters are fictional, but otherwise she hasn’t changed one bit.
Today Clara is the author of dark fiction for young adults. Her debut series is the romantic thriller RUN TO YOU: Deception So Deadly and Deception So Dark.
Her favorite foods are guacamole and cookie dough. But not together. That would be gross.

Find the RUN TO YOU series at your favorite e-tailers, including:
Amazon   B&N   iBooks   Google Play Books   Harlequin   Kobo